Rumblings of revolution in Lapland. --STOP--

Santa issues a statement, "all is well. Totalitarian capitalism prevails. Any elf caught plotting will be deported to Antarctica." --STOP--

Elves make statement,"Santas egotistical reign of terror over impoverished exploited elves is over. Boys and girls around the world will learn that their toys are from the Lapland Collective and also hear of Santas role as an installed dictator by the Coca Cola company. Henceforth Lapland is free of Capitalist marketeers..." --STOP--

Claus is secreted out of Christmas land... --STOP--

Elves declare a socialist state and set about sharing the wealth 365 days a year and no longer differentiating between naughty and nice. --STOP--

Elves say ALL to benefit from Christmas land's wealth and hard work. Christmas declared all year round. --STOP--

-Disgraced Christmas land exleader Santa reportedly living in Saudi Arabia. US announce a blockade saying their children can do without socialist toys. Children of the USA rise up! –MESSAGE ENDS-- 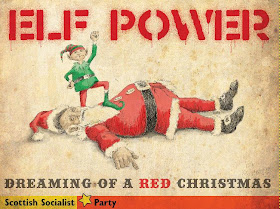 Christmas is a Christian festival and most religions have some festival at the end of the old year and the beginning of the new year.

The Scottish Socialist Party has believers and non-believers, we're a broad church and we send seasonal greetings to all.

Our wishes are for peace and an end to war-- all war, Afghanistan and where-ever.

We salute those who struggle against Trident and the even more fiendish weapons being developed at Aldermaston and Porton Down.

In the testing times ahead the S.S.P. will be there to help maintain and develop the health and well-being of the Scottish people and ensure a happy new year!