Campsie Branch Join march to save Diageo jobs in Kilmarnock 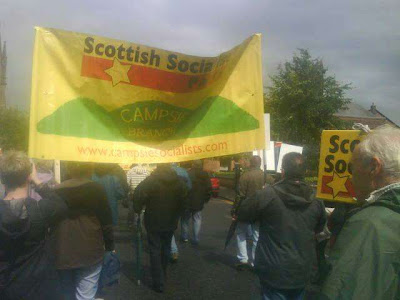 Campsie Branch SSP, along with SSP members from across Scotland, joined thousands in a march and rally for Diageo workers fighting to keep their jobs after the company announced 900 job cuts across plants in Scotland including the historic Johnnie Walker packaging plant in Kilmarnock.

Reports from the demonstration on the SSP main website www.scottishsocialistparty.org/

The East Dunbartonshire/Campsie blog has been inactive in the past couple of weeks due to holidays. Updates will be sporadic during July, returning to full service in August. For news from the SSP and stories from a working class perspective, please access our main site - www.scottishsocialistparty.org

Below is the latest update about the courageous Wyndford Primary School occupiers (released 13 July by Save Our Schools, Glasgow), plus a message of support recieved from the protestors down in Lewisham Bridge...

The group of courageous parents who have occupied Wyndford primary school since Friday 26th June have decided to end their sit-in, but to fight on against the injustices and education cuts by the Glasgow Labour council, more angry and determined than ever.
They left the building in tears – sad to have to leave the building to the tender mercies of the Labour council vandals, angry at what the council is inflicting on their kids and community.

Richie Venton, Glasgow Save Our Schools Campaign organiser, today said:
“The decision by these fearless fighters to leave Wyndford primary came about because the Judicial Review which they had hoped for, on the flaws in the council’s sham consultation, has fallen through – despite the obscene injustices involved.
“They occupied the building to retain it as a school building, to stop the council stripping and demolishing it, whilst lawyers pursued the case of a nursery child’s mother who was never consulted over the closure of Wyndford primary, which her child was meant to go to.
“The legal challenge collapsed on the outrageous grounds that because the city council placed an advert announcing the closure in the Evening Times, that that constituted consultation. This outrage becomes even more obnoxious when it is known that the parent involved has reading difficulties!
“So much for the impartiality of the law; so much for justice for working class people, including those in most need of protection!
“The fearless fighters who staged this sit-in to defend a school from the Labour council vandals deserve the highest public praise and applause.
“And it is even more to their credit that they have pledged to fight on regardless of having to physically withdraw from the school, by helping build support for the Glasgow Save Our Schools Campaign petition to the Scottish parliament on school closures and class sizes, and to continue our battle for classes of 20 or less for all kids.
“One chapter of the struggle has closed; the next one is merely opening!”
Three of those at the heart of the sit-in by a much larger group – Donna, Alison and Nikki – have this to say:

”The reason for us occupying the building has gone, so we are coming out.
“We were proven right to fear that the city council would try to strip the place and put it in the hands of a demolition firm once the school term finished. Within a day of the school year ending they sent 30 vans to uplift equipment and furniture, and the building has been handed over for demolition.
“We occupied it to stop this happening, while we tried to get the legal challenge, the Judicial Review. That has fallen through, so we are ending the sit-in.
“But the fight goes on. It is too late now for our schools, but we will go on to fight for the future.
“We know how scary it is to put our kids into bigger classes. It is ridiculous that classes are getting bigger. It is as if they have decided kids are getting a bit too well educated, so they want to take them down a peg or two.
“The education received by our kids is brilliant compared to when we, the parents, were at school. But now we are going backwards again, with bigger classes, when the government should be taking us forwards, not backwards.
“We have still got the anger – especially towards Steven Purcell and the Labour council. We hate them. We’ll be there to oppose them at every opportunity.
“And we want to thank all the people who have supported us in our fight.”

The Lewisham Bridge message of support can be found HERE
Posted by Campsie Scottish Socialist Party at 7/18/2009 10:22:00 pm No comments: