Have a great Christmas! 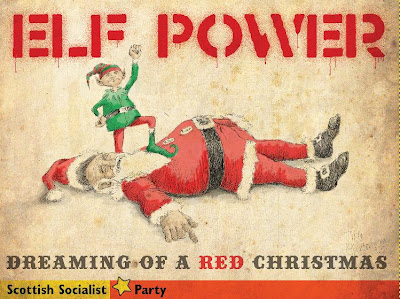 Letter to the Herald

Action not rhetoric required on jobs.

Very few would disagree with that, but what action?  Harry Reid in his recent important article points out the need to rethink “our fundamental approach to eed the entire way we live”. He also goes on to say “ Please give us a coherent political, economic and social prescription, something that reasonable people can take up and even vote for.

There is, indeed, such a policy but alas, the media dare not speak it's name. Socialists recognise employment as a basic human need. Where are we to get jobs? That needs investment and where is that to come from? Socialists believe it should come from the state, and where does the state get the cash?  Why, by taxation.

The Herald reported in June this year that there were 40,000 millionaires in Scotland. If half a million were taken from each of these millionaires by taxation, there would still be 40,000 millionaires but the government would have the resources to improve health, education,welfare and provide jobs not cuts. However,it's a rich man's world. The rich people who run our country won't readily face up to the needs of humanity and for greater equality.

The Herald frequently expresses concern about poverty and inequality. Harry Reid says “about inequality, the rich would have to get poorer much, much faster than the poor."

That has to be done by taxation.