OPEN LETTER TO JO SWINSON
After discussion on twitter with our local MP, Jo Swinson, an exasperated Yorkshire mum, Lisa Ansell, has sent a letter to her via our blog.  READ IT HERE
Lisa also spoke at Oxford University's Gender and Equality Festival - read her speech HERE
Animation - The Crisis of Capitalism HERE
SSPCampsie Remembrance Day Podcast HERE

Students in London have started the fightback for our democracy HERE

SSP CAMPSIE RADIO Special podcast -
SSP Campsie Radio are proud to host Richie Venton who recalls the titanic struggles that took part in the city of Liverpool against the Thatcher Government in the eighties. Richie was part of the Militant Tendency in the Labour Party.  HERE 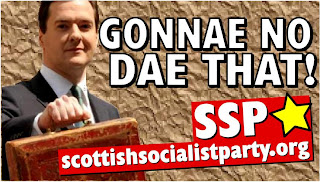 The SSP Contingient at the STUC march in Edinburgh - HERE

I see that the noble traders of Milngavie are doing shift work to operate the town's public toilets themselves in order to save the Council money and to promote, presumably, the "big society". But why stop there? Residents could be volunteered to organise their own refuse collection, unpaid of course, and hard-working voters could be encouraged to maintain the roads in their spare time. No-one could then complain to the Council about the pot holes endangering motorists and discouraging cyclists from venturing out. Perhaps graves could also be dug by grieving mourners.

The main drain on the Council's coffers is our schools, however. There is a simple answer to this problem. Scotland has a huge pool of unemployed teachers and these could be used without pay to gain valuable experience in educating our youth. Should this prove insufficient, then surely there are many retired teachers who would relish the opportunity to renew their joy in front of the eager faces of school students; naturally, there would be no need for monetary compensation. Nor need the size of classes be limited. Academic studies on the merits of small class sizes are ambiguous at best.

Should all this sound too idealistic, readers should bear in mind the great new scheme from Strathclyde Passenger Transport that residents in remoter areas should organise their own bus transport needs.

You may think that the implementation of these imaginative advances towards the "big society" would save the Council sufficient money to reduce Council tax, but it must be remembered that the future cost of the private funding of school construction and refurbishment has to be paid for at great expense into the remote future and we have to continue paying the wages and expenses of our senior executives and our governing Labour-Conservative councillors.

If none of this appeals, then it is surely time that we return to the concept that our Council gives priority to the real needs of our community and endeavours to meet these needs. But this, of course, suggests a socialist alternative where needs take priority over greed and opportunism. This may be unfashionable to our current breed of politicians, but it is a realistic alternative whose time will come again.
Posted by Campsie Scottish Socialist Party at 11/25/2010 08:25:00 pm No comments:

animation - The Crisis of Capitalism

This is an animation of a lecture given by David Harvey on the Crisis of Capitalism. Well worth the watch...

A nod to the eighties - a review of the Thee Faction album, "At Ebbw Vale" 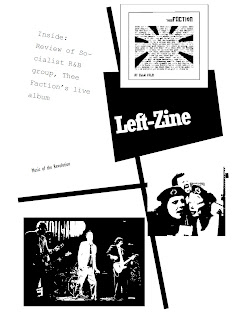 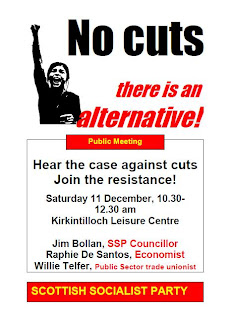 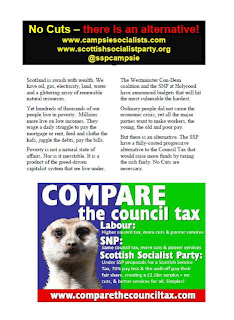 For next year, order a White Poppy

The Students in London started the fightback for our democracy...

this is a transcript of a piece made for this TORY podcast - the piece in isolation can be heard here:

Personally speaking, I am a believer of non-violent confrontation. Having said that, I am no pacifist nor am I Gandhi. Even he understood when under great duress, peoples frustration boiled over into violence. And I totally understand the frustrations vented by young people on the streets of London yesterday. In fact, what I would say is that what happened yesterday was about frustrations over the recent tory coup and undemocratic take over of this country and their insistence on foisting an ideology onto us - one that the majority of voters did not vote for.

This tory minority Government, without the help of the liberal democrats , could not enact this anti-poor, anti-woman, anti young people and anti working people cuts agenda.

People voted for the Lib dems as a vote against the tories - to stop them from carrying out their butchery of our social system and now, in order for the likes of Danny Alexander and Nick clegg to have a bigger salary – and – lets be honest – in order to pay off and protect their parties rich backers, they have done a back flip and are helping the Tories push through their un-necessary cuts.

The students, in my opinion, have actually began the fight back to retake our democracy from this unwanted minority and their failed ideology that saw the original big society quite rightly dismantled after the depression and after the second world war. People are seeing rights and needs their grand parents and parents fight for disappear. People in the past lost weeks and months of pay – and in many cases – their lives, in order to secure for future generations rights such as pension provision, child provision,homes and free education.

To vote for a party who said they stood in the way of the education cuts the Tories proposed, and then to have the same party open the flood gates of tory ideology must be gut wrenching for many voters.

I was glad to see that there were Scottish young people in that crowd. If anything, the Scottish people should be more angry than the rest as 85% of the electorate here voted against the tories. Scottish society is far to the left of the rest of the UK, yet because of the union, our government have no power to raise their own taxes or indeed save our services. The call is going out up here for the Scottish Government to refuse to pass on Westminster’s cuts. Rather, community organisations and activists are calling on the Scottiush Government to set No-Cuts Budgets, Defiance Budgets, and rally masses of workers and communities round a fight for the funds to retain every job, every penny in pay, and every single local service. There are other ways to raise the funds to pay off the richmans debts. The Scottish socialist Party have costed a Scottish service tax which not only would ensure no cuts in services or jobs, but would also raise extra money to invest in these.

It was precisely mass civil disobedience, a refusal to obey Thatcher’s laws and the collection of her government’s hated poll tax, which tossed it (and her) in the dustbin of history.
I say well done to the students who have led the way in retaking our democracy.
Posted by Campsie Scottish Socialist Party at 11/11/2010 10:26:00 pm No comments:

Listen if you dare...