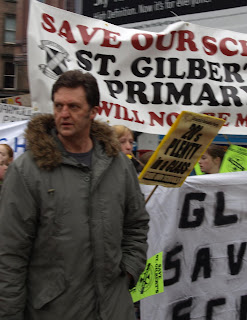 A rash of factory and workplace occupations is spreading across the globe as workers defy the brutal consequences of the recession.

Instead of surrendering to mass redundancies and outright closures – sometimes at a few minutes’ notice, often without even redundancy packages – workers are occupying their workplaces as a central method of struggling for justice.

Every example that wins concessions is boosting the belief of other workforces that there is an alternative to just resigning to the butchery in the boardrooms – that belligerent, militant class action can win at least something where workers have nothing to lose.

Currently the sit-in at Vestas wind turbine factory on the Isle of Wight is creating a storm of international publicity and sympathy for the 600 workers who face the dole, at the same time as the Labour government recently pledged to create 400,000 new green jobs over 5 years.

The 25 Vestas workers who have staged this factory occupation, supported by a mass rally outside every night, have shown tremendous courage in the face of numerous separate attempts by the bully-boy, anti-union Vestas bosses to evict them.

They tried to starve them out, blocking food supplies being sent in by supporters. They threatened the sack and removal of redundancy payments from the workers staging the sit-in, to intimidate them. They took out an injunction to gain re-possession of the factory – in order to close it and move production to the USA and China! The RMT took up the workers’ legal defence and won at least a delay in the possession order being issued – primarily because of the visible display of widespread solidarity outside the factory gates every night and on several demonstrations.

The factory was due to close on 31st July – but the seizure of the factory by workers has just won an indefinite extension of that deadline. Vestas had no union recognition. Some workers joined a union and started organizing others. A group of them established a campaign committee and organised the sit-in from 20th July. This bold action won the active support of hundreds others – Vestas workers, other trade unionists, environmentalists, the local community – on an island where there are no other jobs to go to.

Vestas workers have gone further than any of the other recent factory sit-ins in terms of the demands they are making from their ‘campaign headquarters’ inside the factory: “Gordon Brown – Nationalise This!” declared the banner from day one.

A statement from the workers’ occupation declared, “If the government can spend billions bailing out the banks - and even nationalize them - then surely they can do the same at Vestas”.

As well as organizing solidarity for these heroic fighters for jobs and the protection of the environment, we have a duty to learn from workers’ experiences of sit-ins as a method of struggle, particularly as redundancies and closures sweep the land like a pandemic.

Vestas is only the latest in a series of workplace occupations in the UK. And Thomas Cook workers in Dublin, members of the TSSA union, have just (31st July) occupied in defiance of job losses through closure of 100 offices.

The recent outbreak of factory take-overs in Britain and Ireland began with Waterford Glass workers occupying the plant on 30th January, in opposition to the employers’ announcement of an immediate end to production and 480 job losses.

After 8 weeks’ struggle, they reluctantly accepted a deal that saved 176 of the 480 jobs.

But their example fed the appetite of other workers facing savage closures under brutal terms and conditions. On 31st March, over 600 workers at three Visteon (ex Fords) plants in Belfast, Enfield and Basildon occupied and picketed when they were declared redundant at a few minutes’ notice, without any redundancy pay and with their pensions frozen. A month later, appropriately on May Day, the workers won enhanced redundancy terms, payments in lieu of notice, and holiday pay.

As Kevin Nolan, UNITE union convener at the Enfield factory put it, “People ended up with a year and a half’s worth of salary. That’s a victory when you consider Visteon were hiding behind the recession as a way of completely abandoning all responsibility for 600 UK workers and just dumping them.”

Prior to that high-profile sit-in, a small group of non-unionised workers at Prisme in Dundee occupied their workplace, encouraged by Waterford Glass workers, (who subsequently visited the Dundee sit-in). They had been sacked without notice and without any redundancy pay. Fifty-one days later, the sit-in beat off the redundancies by establishing a cooperative.

Workplace occupations are not a new form of struggle, of course, but this new wave of sit-ins follows many years of the method receding into the background.

Italian car workers seized their factories in northern Italy in the 1920s. What were dubbed ‘sit-won strikes’ swept countries like France and the USA in the mid-1930s. Closer to home and to the present, the most famous workplace occupation was the 1971-2 Upper Clyde Shipbuilders (UCS) ‘work-in’ - in reply to the Tory government’s closure of the yards with at least 6,000 redundancies. This triggered a mass movement, saved many of the jobs after the Tories were forced into a U-turn, and was the impetus to at least 200 sit-ins across the UK in the first half of the 1970s.

For a time such audacious actions receded, although Lee Jeans (mostly women) workers in Greenock occupied in 1981; Caterpillar workers in Uddingston in 1986; and Glacier Metal workers in Glasgow won an outright victory after their seven-week occupation in November-December 1996.

Now, as the global capitalist crisis bites, with even more catastrophic closures and cut-backs on jobs looming, this form of struggle could come back into its own.

Sit-ins are a powerful weapon, paralyzing production; psychologically bringing the battle into the bosses’ ‘own territory’; preventing them from stripping the factory of machinery and equipment that they may want to shift to other production sites, including abroad, in their hunt for subsidies and cheaper labour; preventing bosses from bussing in scabs past picket lines that are hamstrung by anti-union laws and deployment of the police (as seen, for example, at Timex in 1993).

But a sit-in ‘with folded arms’ can still be defeated, or at best win shoddy concessions far short of the potential victories on the agenda if workers’ occupations are accompanied by concerted campaigning outside the sit-in.

When workers facing closures consider a sit-in they should also try to prepare for a campaign of seeking solidarity from fellow workers and local communities – or at least put that into action as soon as they occupy. Such outgoing, concerted campaigning is critical, firstly to help prevent employers evicting them, secondly to enhance the prospects of outright victory for their demands. That was the advice we put into action from day one of the Glacier Metal occupation in 1996. It is clearly what the Vestas workers are ably applying right now.

Touring other workplaces; taking to the streets with leaflets, bucket collections and megaphones to explain the case behind the sit-ins; organizing solidarity mass pickets, rallies and demonstrations – all this and more was done in conquering outright victory for the 1996 Glacier Metal workers sit-in, and is the method being applied at other current occupations to one extent or another.

DEMANDS FROM THE SIT-INS

The other key question that remains is: what do workers demand whilst they occupy their workplace? Of course that depends on what they are fighting against! In the case of Glacier Metal it was mass dismissal of the entire workforce in the drive to smash the union and rip up hard-won conditions. So full re-instatement of every worker, with continuity of terms and conditions, and continued union recognition, were the demands of the sit-in. And that was what was won!

In the case of Visteon, workers occupied to win redundancy payments and protection of their pensions. They won substantial concessions, though they still lost their jobs.

Vestas workers, as stated earlier, have made the most far-reaching demands – and absolutely appropriate ones to the situation, occupying in support of nationalization of the factory. With the need to save jobs and simultaneously save the planet from catastrophic climate change, the best route is public ownership of the UK’s only wind turbine factory, as part of the call for public ownership of the energy industry as a means of democratically planning clean, green energy production.

Most occupations arise from closures or mass redundancies. So defense of every job is the starting point. And instead of pouring a fortune from the public purse down the throats of profiteering bosses who are hell-bent on racing across the globe in pursuit of super-profits, workers and their unions shown champion the demand for public ownership of the assets, under democratic working class control, to sustain jobs.

REVERSE THE TIDE OF CLOSURES

Workplace occupations are not a ‘one-size-fits-all’ method of struggle, applicable on every single occasion. They should not be turned into a fetish. But they are an enormously powerful weapon of struggle that should be utilized far more widely in the teeth of closures and mass redundancies, and in the vast majority of cases have won huge concessions or outright victories. On the other hand, in some conditions, strikes in the face of closures can sometimes allow the employers to just walk away, leaving whole communities wrecked. And in stark contrast to both, appeals to the employers’ good nature to ‘change their minds’ about closures are a pitifully weak response to the boardroom boot-boys, who will only ever ‘change their minds’ when they know the alternative is carnage for their reputation and profit levels.

Many workers will increasingly see they have nothing to lose in the teeth of mass redundancies, and a lot to win by taking up the cudgels. As Visteon’s UNITE convener Kevin Nolan recently told Labour Research magazine, “We just thought: ‘What do we have to lose?’ So we just went for it. If anyone else is in the same position I’d say weigh everything up and if you think there’s a chance of winning something back or improving your situation by occupying the place, then go for it.”

By seizing control of the company assets, including valuable machinery, plus halting production, whilst using the workplace as a huge campaign headquarters, occupations provide workers with an unprecedented platform to take on the bosses who want to heap the crisis they have created on the shoulders of working people.

We have a duty to concretely assist every group of workers who take such action; every victory won is a boost to the generalized struggle to save jobs, not profits, to reverse the tide of closures and cut-backs endured for far too long.