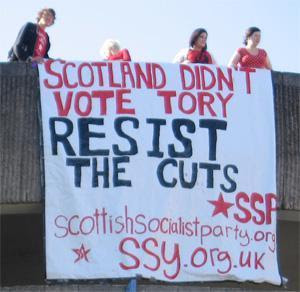 On the day that the new Tory-LibDem coalition government announced its first £6billion tranche of public sector cuts, the Scottish Socialist Party Red Shirt protesters took to the streets of Glasgow in a public warning of the resistance Scotland will mount to these cuts.
Early Monday morning, as workers travelled to work, a team of SSY members mounted a giant banner on a city centre multi-storey car park, gaining supportive horn-blowing for the message “Scotland didn’t vote Tory – resist the cuts”.

At noon, the SSP Red Shirts marched into the offices of Glasgow LibDem MSP Robert Brown to conduct a polite, peaceful dialogue with him, putting him on the spot about the treacherous role of the LibDems in propping up the vicious Tory government.

He was feeble in his claims that it was better to go into government and restrain the Tories in their worst excesses. He visibly squirmed over the LibDem’s sell-out on Trident renewal.
We challenged him to justify why the LibDems claim to favour progressive taxation but are instrumental in a Coalition that plans to cut taxes on Corporations and the rich, whilst assaulting the incomes of the sick, elderly and those on benefits.

He tried to argue that the SSP’s policies to tackle the public sector deficit would force millionaires to leave the country!

We challenged him to either publicly endorse the decision of Clegg et al to be at best the mudguards of a dirty Tory government of cuts, or at worst the willing accomplices in their carnage – or to publicly criticise the impact this will have on the people of Glasgow who elected him.

We suggested honesty in politics is an all too rare commodity, so he should be honest, choose which option he agrees with, and go public on it – instead of the vote-seeking under false pretences conducted by the LibDems in the recent election.

The SSP Red Shirts were dignified but determined in exposing the LibDems’ part in plans to slaughter communities and workers, explaining to both Robert Brown and the media that this was just the opening shot in the resistance we will be a vital part of in the months and years to come.

As we put it in our Press Release announcing the Red Shirts protest:

“In faraway Thailand an unelected dictator, educated at Eton school for the very rich and privileged, is facing determined opposition from the urban and rural poor, organised as the Red Shirts movement.

Meanwhile, an Eton-educated Tory Prime Minister who was rejected by 85% of Scottish voters is out to rule and ruin Scotland without a mandate.

He is only able to launch this Tory butchery because of LibDem treachery.

The LibDems posed as an anti-cuts party during the general election and conned a minority in Scotland into voting for them; now they have formed the Twin Tory government that will cut taxes on the rich and big Corporations, whilst slashing up to 100,000 Scottish jobs.

The Scottish Socialist Party is determined to unite workers and communities to resist, defy and defeat these cuts.

As an opening shot in our resistance, we will mount a demonstration of Red Shirts at a government building. Our message is clear – the Twin Tories have no right to rule and ruin Scotland – we will help to defeat their cuts plans – and we will redouble our campaign for an independent socialist Scotland.”

I see there is more coverage of this here http://ssy.org.uk LOL.