CAUTIOUS VICTORY TO THE SCHOOLS CAMPAIGNERS

The Labour/Tory coalition has been rattled by real people power.

After the SSP’s call for a demo outside the council chamber at tonight’s planned butchery of our children’s schools and our call for a public meeting next Wednesday (see HERE), over 150 members of the public crammed into the council chamber and overflow annexe. The outpouring of disgust at the planned school closures crossed the constituency as PTA’s, parents and independent councillors joined with us and made sure those who had planned using our children to pay for the bankers cuts knew we were not going to stand for it. The council, because of people power, kicked their own report and planned closures, temporarily, into the long grass rather than risk a split vote which could have brought down the unholy alliance of Tories and Labour. 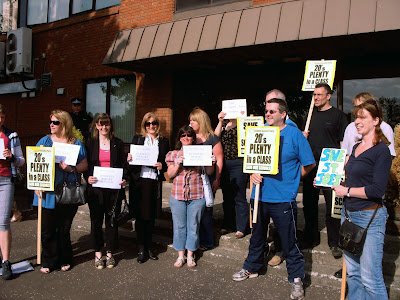 Local SSP campaigner, Willie Telfer said, “getting so many people out in such short notice has been a victory for working class people in the East Dunbartonshire area. We will not pay for the casino money making that these millionaires have been doing with our savings and tax money. These schools are a credit and an asset to our communities and must stay open!”

He went on, “Although this is undoubtedly a temporary victory through pressure placed on the councillors by parents and parent councils, the majority who listened in the annex were left in no doubt a campaign must remain in place in order to keep vigilant as we know they will try to spring this on us again in the next 6 months- year.” 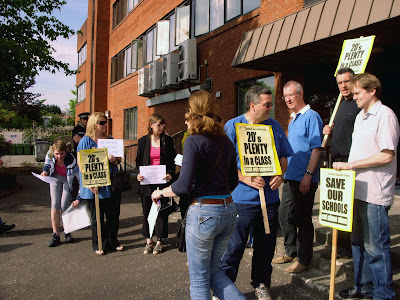 The meeting in Campsie Memorial Hall at 7.00-9.30 on Wednesday night will be going ahead in order to explain to parents and education workers what happened in the council chambers and what it means. We will also be planning a Save Our Schools campaign - making sure we are ready for the next attempt at making our children pay for the cuts. 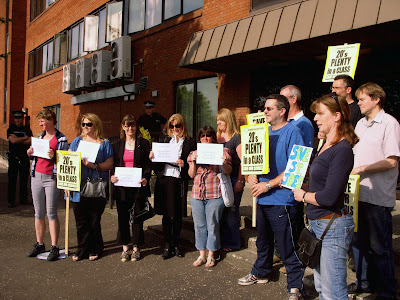