SSP Campsie member, Neil Scott has been in a play by SSP co-spokesperson, Sandra Webster.  Her Five Minute Theatre for the National Theatre of Scotland was also televised by STV.  The play is about the real life plight of a young man, Adam Bojelian, who is being denied a place in school because of "money."  Adam is an award winning poet and all round clever guy!  Read his super blog HERE.

This is why the SSP put people first.  No-one should be denied a place in school, regardless of the physical barriers.  Physical barriers are societal, not the fault of the person involved.  People are disabled by society, and our Cameron/Clegg society is disabling many, many people though throwing up barriers to education, jobs, medical needs and welfare.

Click HERE to see the Five minute video on the STV website, and scroll down for Sandra's blogpiece. 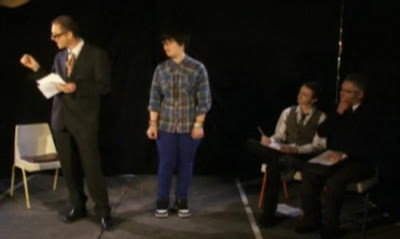 Five Minute Theatre. It was very alright on the night!

Yesterday was the end of a very long week for me which was full of peaks and troughs. Sometime I think my life is like a tsunami wave. I just have to go with the flow. This doesn’t come easy to me as despite being a hopeless navigator, I like to know the general direction of where I am going.One of the highlights of my week was being able to participate again in the National Theatre Of Scotland’s Five minute theatre’s project. Nts’s hashtag is “Theatre Without Walls”. A statement which is more than just lip service to them but an opportunity to involve more of Scotland.