Tonight across Scotland, Peace activists commemorated the dreadful mass murder of over 200,000 Japanese children, women and men by the US use of nuclear weapons during the closing weeks of World War 2.  These weapons did not- and do not- distinguish between civilians and military, nor do they distinguish between BAE / Serco/ G4s shareholders, workers, politicians, soldiers nor peace protestors.

These weapons have been used in conflict twice in history, by the USA, and are weapons of mass murder that no sane person will ever use, yet in these times of Tory and Liberal Democrat cuts, all three main unionist parties in Westminster support their estimated at least £65-100 billion replacement and upgrade.

All of the UK's nuclear weapons- around 200 of them, each with power at least eight times that of the Hiroshima and Nagasaki bombs are all housed 30 miles from Glasgow on the Clyde.

The demonstration was dignified- poetry was read and a Scottish woman who had family friends killed by the dreadful weapon laid chrysanthemums in memory of those she had known.

Speakers from across the political benches spoke of their want for a nuclear free world. Most agreed with the CND stance that a yes in next years referendum would rid Scotland- and most probably by example lead to the disarming of the rest of the British isles and beyond.

But most disgustingly of all he twisted the words of Nagasaki and Hiroshima politicians to make it sound that they supported Westminster rule.

Despite Butlers bitter words, the dignity and integrity of the principled commemoration shone through.

For more details on anti nuclear demonstration and activity, check www.banthebomb.org and https://www.facebook.com/sspcndnetwork 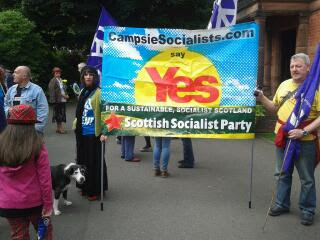 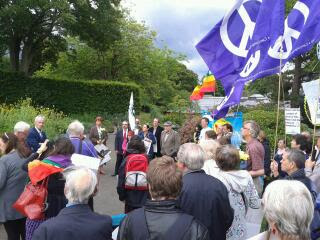 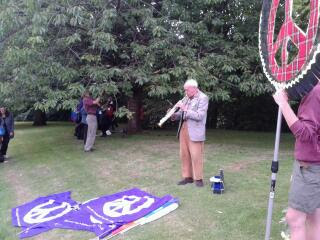 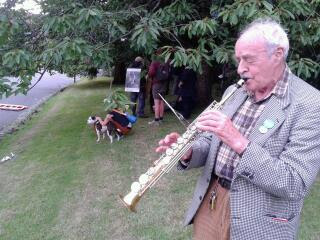 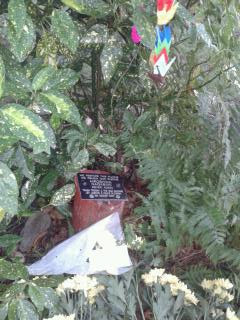 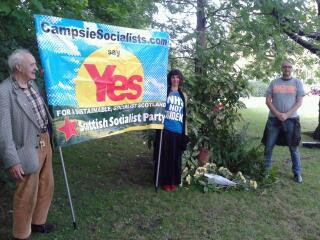