@joswinson part of ANOTHER expenses scandal...

As East Dunbartonshire working people, pensioners, job seekers and families struggle to heat their homes and pay for food, local Tory/Liberal Democrat Westminster coalition Minister MP Jo Swinson has been claiming from the taxpayer to pay her and her husband, MP Duncan Hames, electricity bill.
The SSP have published a pamphlet HERE exposing the extent of fuel poverty in Scotland.

Swinson  and her husband who have, at the lowest estimation, not including the fact they have expenses incuding food paid and subsidised, a joint income of £150,000 a year - claimed £569.72.  This in the face of the calls from coalition members to end the £300 winter fuel allowance pensioners receive.
Politicians and their banker pals gamble and play with our money and caused the financial crisis, but seem to be the only ones not ‘in this together’, with the rest of us suffering wage cuts and hugely increased food and energy bills.
There is a more detailed expose in this weeks Bearsden/Milngavie Herald - "Anger as YOU pay Jo Swinson MP’s electricity bill"

The Scottish Socialist Party have published an 8 point progamme to solve the problem of fuel bills:
-Cap gas and electricity bills immediately with no further rises permitted until fuel poverty is eliminated
-Investigate the big 6 energy companies on charges of profiteering and acting as an industrial cartel
-Double the Winter Fuel Allowance paid to the elderly and extend it to all other vulnerable groups
-Introduce a windfall tax on the big 6 energy companies profits to ensure all their existing 'powercard' customers are moved on to the cheapest tariffs instead of the dearest
-Diversify away from expensive and dirty fossil fuels used in the generation of electricity towards renewables
-Treble the sums spent on Government domestic energy saving schemes such as insulation, double glazing and efficient water boilers
-Build 100,000 new energy efficient new homes for the socially rented sector in Scotland annually to replace the worst of our current 'drafty, leaky and inefficient' stock, and
-Return the energy industry to public ownership to ensure every home has the heating they need and any profits go to the public purse.
Our pamphlet will be available for £3.99 from the Scottish Socialist Party website www.scottishsocialistparty.org 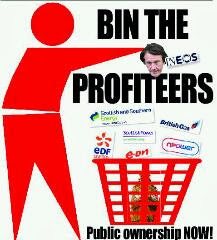