Teachers, after suffering the blows of last years cuts in education, are being asked to work an extra half an hour a DAY in front of classes. In a cynical move, Labour run Glasgow City Council has proposed this as a reduction of “marking time” and called for a re-negotiation of McCrone – the agreement that was supposed to ensure teaching staff worked a 35 hour week. 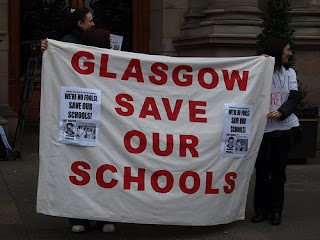 Teachers in Scotland already work an average of 10 hours unpaid overtime and have borne the brunt of cuts that have meant class sizes on the rise and fewer adults in the class. Glasgow has already cut support workers and assistants jobs that help with children needing extra educational input.

Glasgow has also quietly shed 500 teachers in the past two years, and the Labour council also presided over closures of 22 schools last year under the previous scandal riven Labour provost, Steven Purcell.  All of this has impacted on teaching and learning.  Children are being made to suffer because of the neo-liberalist ideology of the combined forces of the Tories, Liberal Democrats and Labour and the apparent capitulation of the SNP.

Locally, this has been a complete capitulation to the Tories and Liberal Democrats by a so called Labour Glasgow Council. Not only have they quietly cut education provision through staffing, but now they are essentially asking teachers to take a pay cut.

Labour along with the Tories and Liberal Democrats are peddling the lie that cuts are necessary. The SNP are keeping a cynical silence and after Salmond and Cameron met shortly after the election of the most reactionary Government since Thatcher (and actually becoming more reactionary by the hour), the SNP seem powerless to criticise the ideological cuts they are telling us are necessary. This is not true. There are huge amounts of money around – but in the hands of the bankers and billionaires who caused this crisis (including the RBS who recently have launched an incredible campaign saying they are giving thousands of pounds to Scottish Education, when in fact they were one of the major factors that have led to the crisis in Education  over the past two years!)

SSP members in EIS wish to unite with other trade unionists in decisive campaigns – including coordinated industrial action – to defend jobs, pay, educational expenditure, and national action to enforce maximum class sizes of 20 across the board, as a pre-requisite to improved education and better conditions of work.

How will this be paid for?

The SSP have long been campaigning for a Scottish Service Tax in place of the Council Tax. This would mean the poorest families would pay nothing, but the highest earners would pay more – a fair tax in other words. The richest would pay a modest extra 10% in tax – which when you realise their income grew by 30% last year alone – is a drop in the ocean. The revenue generated by this tax alone would save our Scottish Education System, save jobs in the Public Sector and ensure the Tories and Liberal Democrats do not return us to the eighties when Thatcher and Major had public education on it’s knees.  See also our alternative budget

The SSP support the ballot for strike action the EIS are calling in March – but urge the union to unite with other unions and stand together in solidarity against these attacks on the working class.

Upcoming events at which teachers and the EIS can unite with others against the Tory and Liberal Democrat cuts:

Sat 2nd October Street Rally against cuts… as a Scottish contribution to the European TUC action, AND as a stepping up of efforts to bring members from across different unions and community groups together – as a means of building towards the STUC demo (see below), AND to begin to crank up unity in action BEFORE either the Tories and Liberal Democrats OR SNP govts set their spending cuts in concrete.