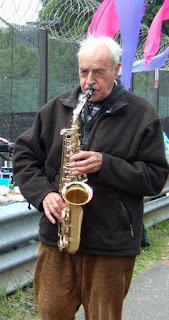 87 year old retired teacher Ron Mackay has been a Socialist all of his adult life. He is a member of CND and the Scottish Socialist Party, Campsie Branch

"I want to say a bit about neo-liberalism, the creed that life is all about making money. They privatise water. They'd privatise the air we breathe if it were possible. It's a sickness and so many people have it, they're known as Tories. There's not so many in Scotland, but, alas, we are afflicted by carriers of this disease, they're called New Labour. In the vast majority of cases when you vote Labour you get New Labour. My own Labour M.P., Gregg McClymont, MP for Cumbernauld, Kilsyth and Kirkintilloch is a typical example- all smiles and hand shakes- charming. I wrote to him about Trident and weapons of mass destruction and what did he reply? A full page of verbal diarrhoea quoting Brown and giving the excuse that others have it so we must have it. Now if ever there was a moral issue this is it. W M D s are for the mass slaughter of innocent men, women and children. Don't equivocate we're talking of mass murder. This is only one aspect of this malignant disease but New Labour is a carrier of this illness. Beware, for all their smiles, friendliness and concern, they are sick or at least carriers of the infection.

What about the Scottish Nationalists. The leaders of that party also carry the infection but they do oppose Trident and W.M.D.s and occasionally some of them sip the medicine – the only real cure for this disease. It's called Socialist policy."