TORIES OUT OF SCOTLAND!

No to another lost generation! 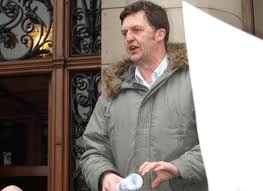 The Tories are returning to the scene of their many crimes against the working class! Westminster's Butcher-in-Chief, David Cameron, hopes to breeze into Troon on Saturday 24th March to address the Scottish Tory party conference.
Ayrshire has the highest unemployment in jobs-starved Scotland, which makes this Eton boot-boy's visit all the more provocative. Cameron's slaughter of the public sector will add thousands to the queues of misery in this area. And for every civil servant, council worker, NHS worker or teacher who loses their job, at least another private sector worker will be made jobless through the knock-on effect.

Demo against youth unemployment
Ayrshire has already been turned into a desert after numerous multinationals were bribed by grants and government subsidies, only to then 'up sticks' and move to richer pastures and cheaper labour abroad.
Now a whole new generation is being condemned to oblivion by a capitalist system and capitalist government whose only interest is profit, not people.
Scotland is virtually a Tory free zone, and the SSP in Ayrshire and beyond aim to help keep it that way. We are spearheading the buildup of a mass protest against this invasion by an unwanted representative of brutal, red-in-tooth-and-claw capitalism, around the message "Tories out of Scotland - fight the crime of youth unemployment - no to another lost generation".
The STUC has called a demo in Troon against austerity-induced youth unemployment. The SSP is wholeheartedly building this, calling on workers and young people in Ayrshire and Scotland to keep Cameron out, and to demand that everyone over 16 should have the genuine choice of either a decent, well-paid job; proper training with a job at the end; or a living grant to fund further or higher education.

Plague of mass unemployment
Mass unemployment is stalking the country like a plague. Nobody is spared, apart from the capitalist elite who are perpetrating this crime against working class communities.
Over 230,000 Scottish people are officially unemployed, though the true figure is far higher. Of these, an obscene 103,000 are under 24 years old, a terrible indictment of a society with no future.
For everyone directly hit by it, unemployment is a human tragedy. It means eking out an existence on £65 a week, as inflation lets rip, usually spending it all on essentials the first week, begging or borrowing for the second week. If anything worse still, it means a sense of hopelessness and living without purpose, something nobody should be subjected to, whether that be older workers who have contributed to society's productive wealth for decades, or young people stepping out on life's journey.

Free labour in the 'free' marketThe victims of mass unemployment are being used as slave labour by the same government and same capitalist employers whose system creates the jobs wasteland in the first place. Under the coyly-named Mandatory Work Activity, the government's Department for Work & Pension is forcing unemployed people into jobs with multinationals, retail sector giants, and even some 'charitable' employers - but unpaid, apart from their benefits and expenses!
These unemployed people face the choice: work for nothing, or lose your benefits!
The government has so far refused to reveal details for Scotland, but down South the companies exposed for this 21st century slavery include Tesco, Asda, Sainsbury's, TK Maxx, Waterstone's, Matalan, Pizza Hut, Poundland, Shelter and Oxfam. The public outrage has forced most of these outfits to withdraw or 'review' their involvement, but there is still a big job to be done, in tandem with unions in retail like USDAW, to oppose this ruthless exploitation, which is also a huge threat to the jobs of the low paid workers these unemployed conscripts could potentially replace.

No excuse for jobs slaughter
And the criminal reality is that there is no excuse for mass unemployment. Plenty of jobs need doing. Kids need smaller classes for a better education, which demands more teachers. Elderly people need expanded care services, which requires trained staff. The burgeoning housing lists cry out for a massive house building programme, to the highest environmental standards, offering the opportunity for thousand of apprenticeships and secure jobs in the construction industry. The SSP's demand for free public transport, to combat poverty, pollution and social isolation, would require thousands of extra jobs as drivers on trains, buses and subways, as well as job expansion in the manufacture of buses, trains, railway networks, ferries. A serious investment programme in publicly owned energy would be another source of sustainable, green jobs that could benefit people and planet alike. And those are just a few illustrations of the much needed, socially useful jobs that could and should be created.

Long hours - and no hours!
In tandem with the jobs that need to be done, there are plenty of potential sources of funding and ways of creating these jobs, if the political will was there, and if we challenged the very foundations of the rotten system of capitalist contradictions.
Whilst 230,000 Scots are officially unemployed, working no hours, 260,000 workers in Scotland are enduring the toil and stress of working over 48 hours a week. And a breathtaking 54,000 Scottish workers are putting in more than 60 hours a week!
Why do workers do such backbreaking hours, with the horrendous consequences to their health, stress levels, family life, health and safety risks at work - and even the damage to the economy that tired and dispirited workers create?
Appallingly low wage levels, clashing with rising prices, are the prime cause of the 'long hours culture'. Added to that is sheer terror at losing your job, having to 'show face' and put in extra hours when it is demanded to suit the business needs of bosses who use the threat of mass unemployment, and the existence of a mass 'reserve army of labour', as a battering ram.
If wages were raised to a decent level, including the national minimum wage being hiked to £9 an hour to match two-thirds of male average earnings, the pressure to work outrageously long hours would be largely eliminated.

Cut hours of work - not jobs or pay!
The fight for a shorter working week is a central demand that the trade unions should champion far more forcefully, in an aggressive a campaign against unemployment, in favour of jobs for all.
But in doing so, why should workers pay for the crisis created by the capitalists, bankers and billionaires? Why should workers suffer even a penny cut in pay with the introduction of a maximum 35 hour working week, as a first step towards the goal of a 4-day week? The unions and their allies should fight around slogans like "cut hours - not jobs or pay", "for a 35 hour week with no loss of pay".
Given the growing trend towards long hours of toil alongside mass unemployment, well over two million full-time jobs could be created by this one measure; around 200,000 in Scotland - enough to eliminate current unemployment.

Jobs, not profit
But of course this flies at the heart of the capitalist system: profit! Demanding shorter hours with no loss of earnings, as a way to share out the work and enhance everyone's life, challenges the whole idea of production for profit for the few, which is why the capitalist exploiters will have to be defeated and replaced with a system of democratic public ownership and control of the major economic sectors.

Unpaid overtime: start being paid on 24 February!
There is also a more naked form of exploitation, mostly caused by bosses using the weapon of mass unemployment as a threat to employed workers - but which adds to that very unemployment: unpaid overtime.
How do you fancy working your full hours, from 1st January to 24th February this year, before you get a penny in pay?!  This is no fantasy nightmare; it is the reality, the average, concrete consequence of the two billion hours of unpaid overtime worked last year.
Over one in five workers across the nation felt bullied and terrified into giving this free labour to their employer, 'donating' £29.2billion worth of free work in 2011. That is an average of £5,300 each lost in wages.
And the two billion hours worked were the equivalent of a million full-time jobs across the UK, about 100,000 in Scotland, which in one fell swoop would mop up all the unemployed young people languishing on Scotland's unemployed registers.

Tax the rich to create jobs
The SSP unashamedly campaigns to tax the rich, as another central means of creating well-paid jobs for all, as well as funding decent public services. To take one simple example: the richest 1,000 fat cats last year enjoyed a combined income of £350billion. A modest 10 per cent wealth tax on their ill-gotten gains would rake in £35bn, enough to fund 1.4 million new jobs with an annual wage of £25,000. Scotland's share of that would be about 140,000 new jobs, with decent pay, and increased spending power that would create even more jobs and boost local communities.

Fight for decent jobs for all
Nobody should believe the dirty lie that there is no alternative to mass unemployment. It is not a divine creation, but the product of a profit-crazed, grotesquely contradictory system known as capitalism - and the result of conscious political decisions by politicians who support and uphold the system of capitalist profiteering.
Join the protest against cuts and youth unemployment in Troon on Saturday 24th March. Keep the Tories out of Scotland. And join the SSP in a campaign for socialist measures that would create millions of secure jobs, give young people a future, and improve the lifestyles and well-being of all workers.
Posted by Campsie Scottish Socialist Party at 2/23/2012 07:04:00 pm