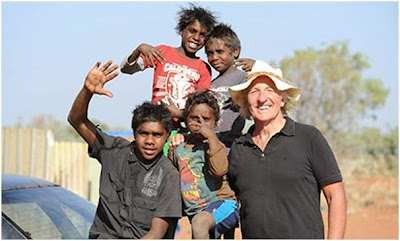 On Thursday 20th of December 2013, ITV and its Scottish sister channel STV aired a documentary film by Australian investigative journalist John Pilger. Anyone familiar with Pilger’s work will be aware of the truly shocking nature of previous documentaries such as: War on Democracy, Death of a Nation and Stealing a Nation. However, despite the fact that his previous work has created a ‘nothing shocks me anymore’ mind set, the setting of this latest documentary and given it was filmed only last year (2012), has perhaps hit those viewing it in the UK harder than many of the older documentaries.

Australia is a country with close ties to the UK. It is a country that still shares the royal family, and displays a Union Jack in the top left hand corner of the national flag. Many of the people are descended from British settlers many generations ago and there are a large number of British people living in the country having moved recently. It is perhaps this connection which we feel to Australia that makes John Pilger’s documentary as hard hitting as it was. There is no doubt that had this particular situation come to light in any country it would have been equally as shocking, but through decades of inaccurate media coverage the people of Britain have come to believe that Apartheid is a thing of the past, and exclusive to under developed countries with despotic governments.

Firstly, it is important to state that Australia is a country with some wonderful features, friendly people and vast natural beauty. It is none the less important to ask questions of the image that most people have of the Island continent. Racism is something that leaves an ugly scar on a countries image but Australia still has an open wound. The aborigine population have been subjected to slavery, genocide, rape and robbery in a country that seems to forget about its original people. War memorials speak of Australia’s heroes in the WW’s with intense detail, but they seem to forget the first war that the country experienced; that of the aborigines against the British invaders. The only place the aborigine people are represented at this particular museum is in stone carvings on the wall alongside Animals such as Lizards and Birds. This rejection of the true history of Australia’s past mixed with the dehumanising effect of the stone carvings leaves the viewer in disbelief. Surely a country as developed and as modernised as Australia would not lack the ability to see how offensive and racist it is to display such things?

From the lack of truth about Australia’s oppressive history, which includes a former concentration camp turned luxury island resort with no mention of the islands previous use, to modern day apartheid. The aborigine population see none of Australia’s wealth trickle down to them. 1 in 3 of the native people die before the age of 45 and the incarceration rate in northern Australia for Black Australians is 10 times higher than Apartheid South Africa. Specific cases of police brutality and lack of care resulting in deaths of aborigine men, with no convictions, puts faces to the statistics. 2 of the men interviewed during the program died during the filming. Living conditions no doubt played a major role. Shacks with a mattress on the dirt floor reminded the viewers of sub Saharan Africa and the poverty that exists there. Keeping in mind Australia is one of the richest countries in the world, this fact is even more inexcusable.

John Pilger at one point during the documentary set out to interview citizens of Australia in Canberra who were celebrating ‘Australia Day’, a day that celebrates the history and formation of the country. Asking questions about how the native people will feel on such a day, Pilger received mixed responses ranging from confusion to right out racist ignorance. One man had the audacity to say if they come to this country they should learn to live our way. Obviously the fact that these people he refers to were there first escaped this gentleman.  This statement however summed up nicely the very attitude that has plagued this earth allowing such racism and intolerance to exist.

It is a refusal to accept other cultures and differences that have caused great divisions in the world since people started moving freely across it. Schools promote homogeneity, capitalism excludes anybody and any group of people that it does not see as value producing and nationalism is thrown around to keep people supporting profit making, illegal wars such as the Afghan war. The above statement from the Australian gentleman on the streets of Canberra is the very attitude which allows the oppression and murder of whole groups of people based on their race, religion and/or culture. The aborigine people do not ask that the white people that inhabit Australia leave and return to their ancestral homes in Europe. All they ask is that they get the opportunity to live in dignity, and to be allowed to celebrate their ancient culture which has survived oppression and genocide. They are more than happy to live side by side with their white Australian brothers and sister in doing so.
Posted by Campsie Scottish Socialist Party at 12/21/2013 08:39:00 am