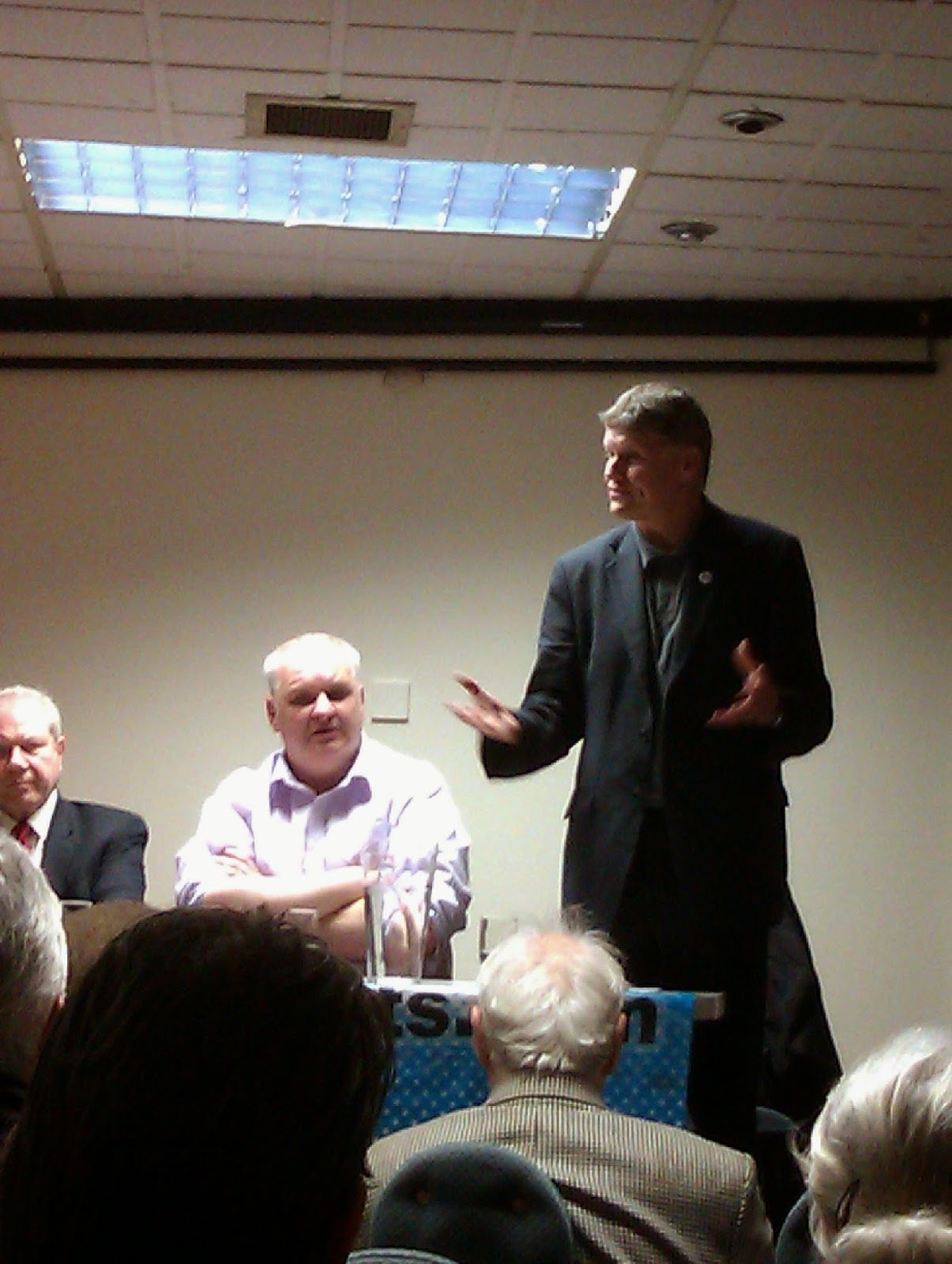 Over 80 members of the public packed into the Miners Welfare on 30th April to take part in the SSP Public Meeting in Kirkintilloch on ‘The Socialist case for Independence’. It was one of the best attended public meetings on Independence in East Dunbartonshire. The Speakers, veteran former MSP/MP Jim Sillars, who has had a major impact on Labour and SNP politics for over 30 years, and SSP Co Convener and former MSP Colin Fox, were given a good reception as they outlined their vision for an Independent Socialist Scotland within a modern democratic republic. They advanced their view that this was a historic chance to elect a government of the left which would pursue policies which would benefit working people such as a living wage, abolition of the bedroom tax, investment in public services, repeal of anti-trade union laws and the removal of Trident. Colin fox made the point that the SSP regards this as only the start, a means to an end, with a Yes vote eventually opening the door to a Socialist government with the powers and political will to tackle poverty and inequality with far reaching redistribution of wealth and power.

Colin Fox outlined the SSP’s support for Scotland’s right to self-determination and that all the evidence shows that the working class majority will be economically, socially and politically better off in an independent Scotland. Referring to the ability of Scotland to run its own affairs, and the negative campaigning of the No Camp on this issue, Colin Fox pointed out; 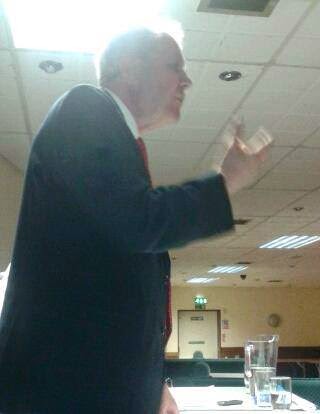 ‘’As a socialist my view is that our most precious asset, worth more than the oil revenue and all the whiskey, is the people of Scotland who are capable of running this country and making a success of it’’ 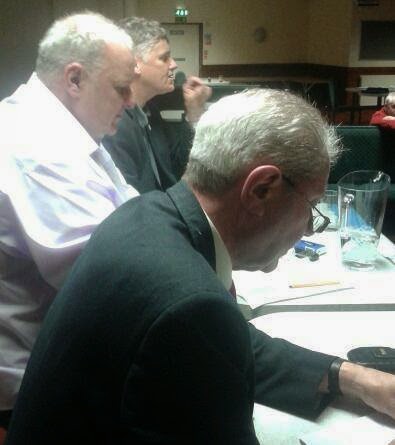 He said it was now the chance to grasp the greatest opportunity in our lifetime, to change the direction of the economy and social policy and in so doing improve the living standards of the Scottish people. It was in his view the greatest debate in 300 years; 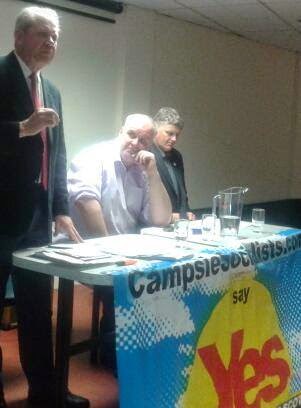 ‘’The stakes are enormous and the consequences are enormous. This isn’t just a vote for independence but it is a vote to reject neo- liberalism and war mongering. These things have held Scotland back and should not be part of a future Scotland. It’s about creating a new Scotland based on fairness, social justice and social democracy. The British establishment don’t want Scotland to be independent because they gain financially from Scotland.’’

He continued that a Yes vote and the eventual election of a left government would lead to improved working conditions and employee rights, which have been constantly under attack over the last three decades by both Labour and the Conservatives; 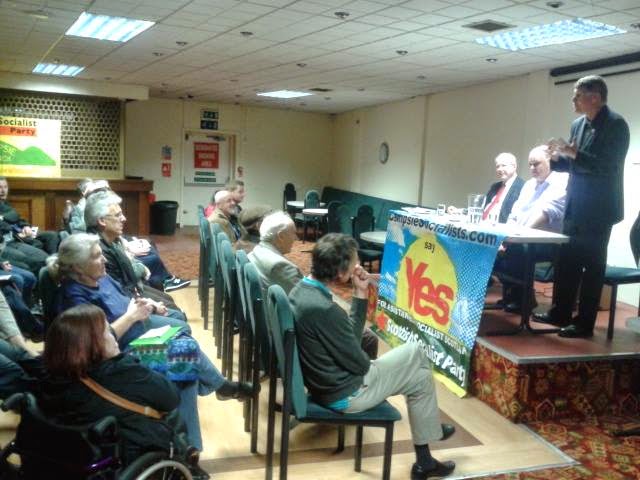 ‘’We are going through the worst recession in 80 years. A million people are now on zero hours contracts without any security or trade union rights or hope of permanent employment. The working class people in Scotland are held back on employment rights, held back on pensions and held back by another 10 years of austerity. We are rejecting that by voting for Independence.’’

Jim Sillars outlined his view of a socialist case for independence in a deeply thought provoking manner given his involvement over so many years as a socialist and independence campaigner. He emphasised that in his view there is definitely a sense of renewed optimism within working people, with the realisation that they have the capability to run their own affairs and to radically change society for the better, but that it will only come with the powers which independence brings. Jim Sillars reflected the mood within the audience when he made the following observation; 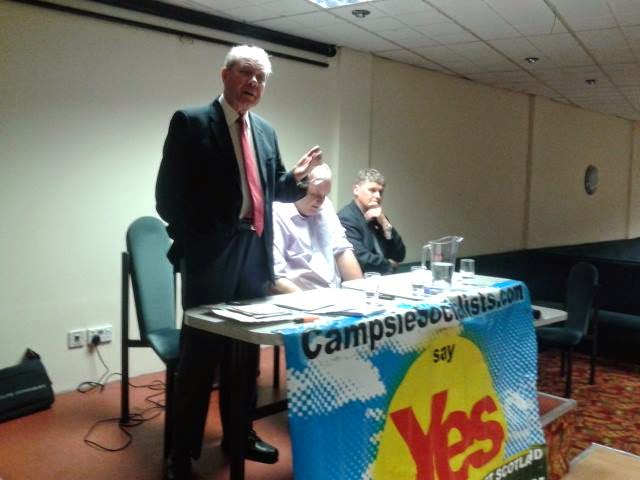 The audience reacted in wholehearted agreement to this statement!

There were a broad range of questions asked by the audience on a number of issues. A number of people signed up for more information on the SSP and wanted to be kept informed of further meetings, campaigns and activities organised by the SSP Campsie Branch. The meeting could undoubtable be termed a success both in terms of numbers attending and the energy within the audience which was reflected in the quality of the questions to the speakers. What can definitely be taken from the meeting is that there is now a growing sense of self confidence and political consciousness within ordinary working people. As Jim Sillars commented, we no longer need to feel inadequate or lacking in self confidence about what we can achieve.

It was clear from speaking to audience members after the event, that most of the people attending had never been to a political meeting before, and these augers well for the chances of a Yes vote come September. The good attendance at this SSP meeting, as well as recent others in Ayrshire, Govan and Pennilee reflect the fact that people are becoming more engaged with the Campaign as it progresses.

The success of the SSP public meeting was also down to the determined hard work of the local SSP and other activists in the weeks leading up to the meeting. A series of activities including door to door leafleting, postering, newsletters and press releases in local newspapers all collectively helped to advertise the meeting. We can take renewed satisfaction that the work of the Campsie Branch of the SSP is making a difference on the ground by engaging with people on the issues that matter to them. We can have confidence that there is definitely public interest out there on what the SSP has to say and we will continue with renewed energy organising further public meetings, campaigns, stalls and newsletters and these will be discussed at future SSP Campsie Branch Meetings.