Our strategy breakfast in the Kirkie Puffer was great - really positive and frank. 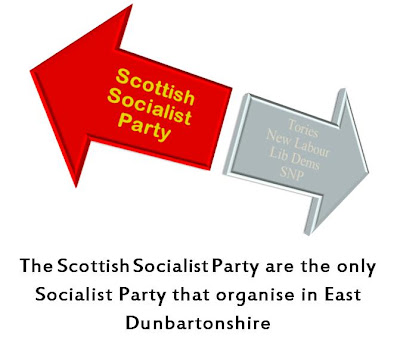 Congratulations and thanks were expressed to Mark for standing in Bishopbriggs South and also to Brian Pollitt for placarding our branch area.

We had a long conversation about the positive aspects of the election. Our focussed campaign meant six people have asked for membership forms.

The branch is going to have a 10th anniversary of Campsie Branch BBQ in Mugdock on Saturday 1st August - all branches and members welcome (and bring friends!).

We also plan a 50th anniversary of the Cuban Revolution information/celebration morning in Kirkintilloch - and will hopefully have invited speakers etc.

Next Saturday, members of the branch will go along to the CND demo in George Square... the Campsie banner will be raised against Trident.

Also - in October there is a Suffragettes memorial march in Edinburgh and the branch hope to be represented at it.

Our branch AGM will be on Weds 23 September in Milton of Campsie Village Hall.

A Newsletter will be going out next weekend to ex and present members of the Campsie branch on all of the positive things we plan and have been involved in over the past few months.

The Puffer was a great venue for this meeting - it was free and it was quiet and we had a wee nook all to ourselves.