Make the rich pay – bail out all public services, not bankers’ and billionaires’ profits 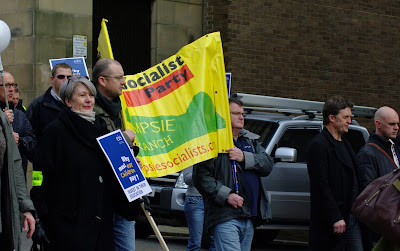 Two major trade union events in the space of 48 hours demonstrate the seething anger at public sector cuts, the potential for a united resistance across the trade unions, and the potency, increasing popularity and urgent necessity of the Scottish Socialist Party’s alternatives to this assault on jobs, services and conditions.

On Saturday 6th March, 10,000 teachers, lecturers, nursery staff, parents, pupils and other trade unionists poured out of Glasgow’s Kelvingrove Park, snaking their way round a mammoth route to the EIS union’s rally in the SECC.

This was the first national demo called by the EIS in decades. The overwhelming majority of the marchers had never been on a demo before. The age profile was a whole cross-section, from toddlers in buggies and primary kids, through trainee and newly qualified teachers, to bearded veterans of the profession – united in their fury at education budget cuts, whilst bankers’ bailouts, renewal of Trident weapons and bloody war cost the public a fortune.

Anger at that obscene contrast was reflected in speeches by the EIS president and others at the rally. They denounced the governments of Westminster and Holyrood for regarding these expenditures as more important than the education of our children, who represent the future, and lambasted the SNP government for now confronting children with the choice of either free school meals or smaller classes, when they had promised both and children deserve both. 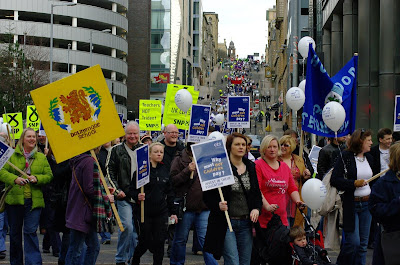 SSP on the march

The EIS march is part of a campaign they have entitled “Why must our children pay?”

The SSP was the only party with a leaflet that directly dealt with the issues of the march, demanding “make the rich pay – not our kids; bail out education and all services – not bankers’ profits; 20’s plenty in any class – give our kids a chance.”

People snapped up the leaflets, smiled and murmured their agreement with the headlines, turned and quoted it to their friends as they assembled to march off.

The lively SSP contingent was joined by parents and children who fought the heroic Save Our Schools Campaign in Glasgow last year. As we marched we led the chant “Twenty’s plenty in any class – give our kids a chance”, which caught on with the crowd marching and bystanders on the pavements.

As the 10,000 trod towards the end of their marathon march to the SECC rally, we improvised an SSP “street meeting” on the pavement as they passed us! We belted out our message on a very loud PA system: “The SSP demands that the government tax the rich, to bail out education, not bankers’ profits and bankers’ bonuses.” Several sections of the march shouted back their agreement with us as they marched past, and even more contingents applauded us as they marched past. A sign of how profoundly the bankers’ bailout has changed people’s consciousness, including their open-ness to the SSP’s unashamed socialist demands.

The EIS leadership promised in speeches that this mass demo is just the start of the campaign, which is to be welcomed, and which EIS union activists and members will make sure is the case.

It is absolutely right that as the union representing 60,000 members in education they should take up the cudgels in defence of that service. But what would be tragic, and totally divisive and counter-productive, is if the EIS leadership argued for cuts in other services to save education; unity of opposition to all service cuts, combining the power and scale of members of all public sector unions and the communities they service is what is urgently needed to stop the slaughter. 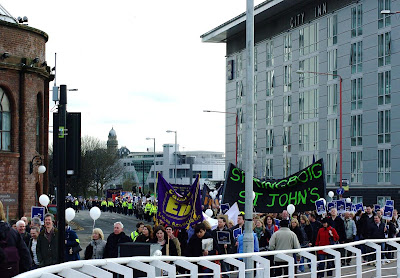 It was therefore encouraging that an EIS representative (as well as speakers from the FBU, UNISON and STUC) addressed the 8th March strike rally in Glasgow, called during the 48-hour stoppage by all civil service workers, members of PCS.

This was the biggest civil service strike since 1987. Across the UK, over 250,000 workers brought services to a halt in tax and customs offices; Job Centres; driving centres; the Courts; the MoD; passport offices; the Scottish parliament (for the first time ever); Westminster … to name but some. 30,000 of these strikers were in Scotland.

They are overwhelmingly low-paid workers, whose partial compensation for low pay has been a modest average pension of £6,500 and a reasonable redundancy scheme – which is now under assault. The government has set in motion the legislation to slash the Civil Service Compensation Scheme, cutting the package that most workers would get on being made redundant by up to one-third, tens of thousands of pounds each. A sure sign that the Labour government (backed up quite openly by the Tories on this) want to slaughter tens of thousands of jobs on the cheap – in addition to the 100,000 already shed in the past 5 years – and usher in privatisation by making the prospect more attractive to the privateers.

The response to the 48-hour strike was absolutely overwhelming – forcing management to stoop to tricks like jetting in a handful of scab managers from Newcastle to open the Glasgow DVLA office. 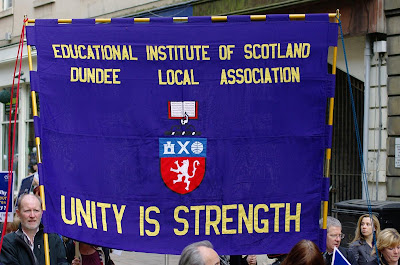 Socialism in the civil service

Again, not only did SSP members in PCS play an instrumental part in building the strike, but our policies were more widely and eagerly embraced than for a long time: on the picket lines, at the PCS strike rallies in Glasgow and Dundee, and at the SSP public meeting in Glasgow after the union rally. This was a really large meeting, with over half those present attending their first ever SSP meeting. And strikers were enthusiastic in their support for our socialist aims – many commenting wryly that if only we could get a fair hearing in the media, imagine how popular our case would be – as well as our proposals on how to build public sector unity against all cuts in the immediate future. 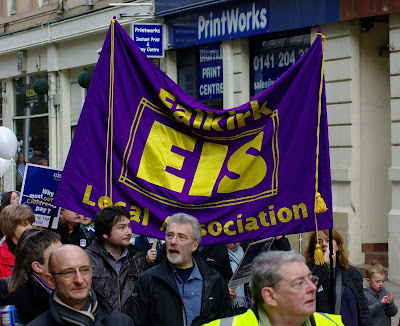 Alongside a rolling programme of further industrial action by the PCS, railway workers are striking (Scotrail) and balloting for pre-General Election strikes (Network Rail). Numerous anti-cuts campaigns, involving council workers’ unions and communities, are campaigning against the brutal council cuts that loom. Already 5,000 council jobs face the chop, with hair-raising predictions of 32,000 jobs (one in every eight!) being butchered by 2014. And community centres face closure up and down Scotland.

So an immediate opportunity to tie all these strands of struggle into a rope to restrain the axe-wielders presents itself on Saturday 10th April. Scottish UNISON is calling a mass, national demonstration in Glasgow that day, in defence of public services.

SSP members in all the various trade unions – alongside other union members – need to move heaven and earth to make this an almighty display of the power of a united working class on the march, by calling on their unions to mobilise members into an event that dwarfs even the brilliant 10,000 on the EIS march.

As Labour, Tory, Lib Dem and SNP politicians sharpen their knives in a grisly pre-election competition for whose cuts are the deepest, the SSP in contrast will stand up for public sector workers and the communities that depend on public services.

We will build for a united march for public services – not private profit, demanding the governments tax the rich and bail out all public services - not bankers’ and billionaires’ profits.

We will campaign inside the unions for measures that would fund these services, protect and create jobs, and begin to re-distribute wealth from the millionaires to the millions.

Measures such as a 10% tax on every millionaire (to fund 80,000 new jobs in Scotland alone, on £25,000 a year for 3 years!); restoration of income tax on the rich to pre-Thatcher levels (83%) and likewise Corporation Tax on big companies, from the current paltry 28% to the 52% it was at before Thatcher and then New Labour made this country a tax haven for the tax-dodging rich. 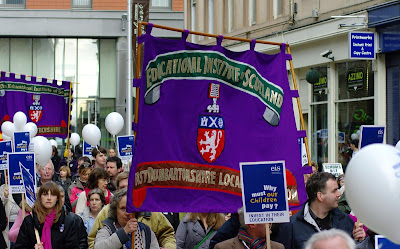 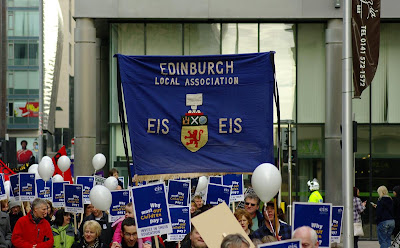 A sea-change has begun in the outlook of workers in the frontline of public sector carnage by the parties that back big business and the profit system. Socialist measures – including full-blown public ownership of the entire banking sector, natural wealth, services and big industries, but with democratic control – are increasingly convincing to people whose future is under threat.

The time is ripe for the potential power of a united trade union movement to be mobilised – starting with 10th April – and for socialist demands to be boldly advanced amongst an increasingly receptive crowd of angry workers. The SSP will do its part, emboldened by the events of the past 48 hours. 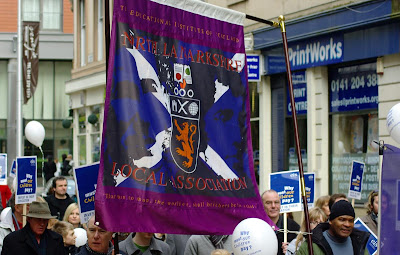 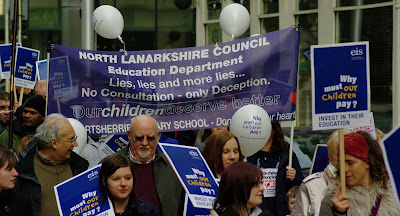 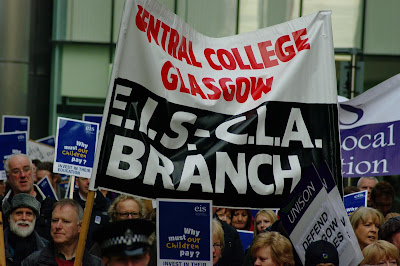 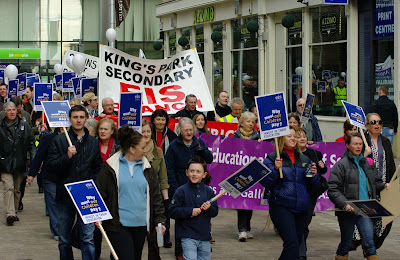 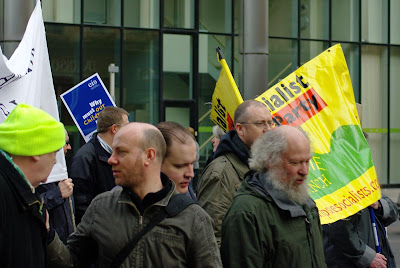 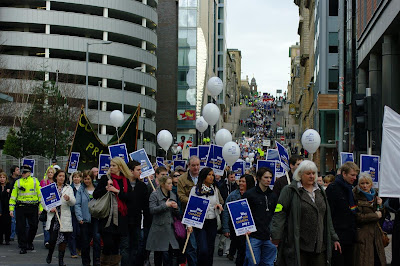 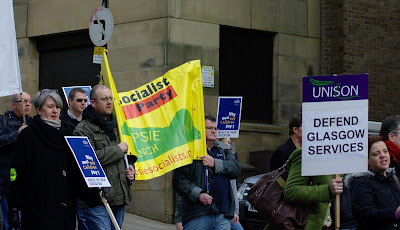 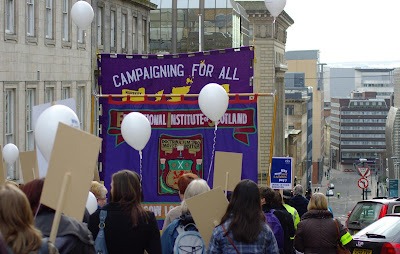 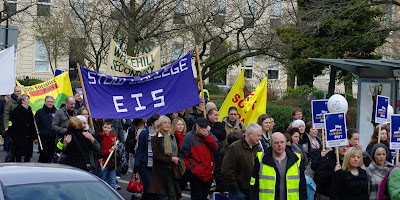 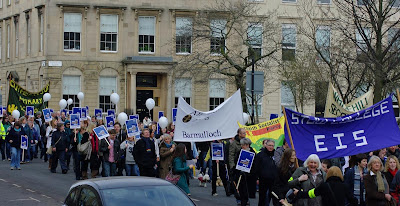 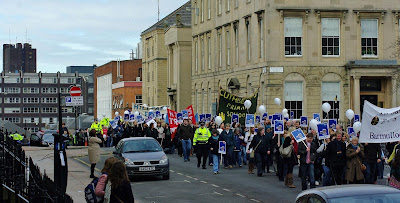 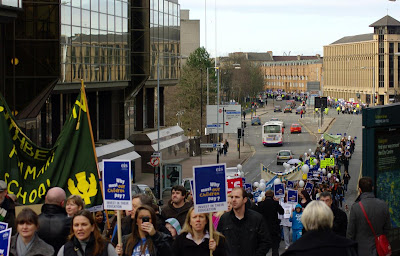 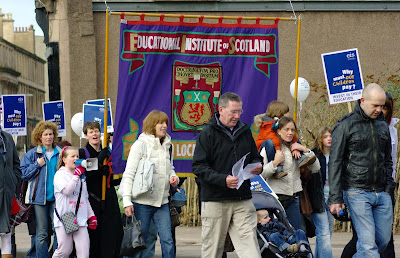 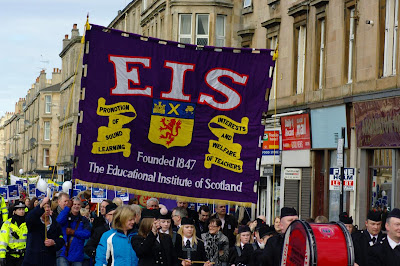