The Scottish Socialist Party shares the grief and anger of local people at the tragic
death of the Serykh family - apparently driven to suicide after being refused asylum. 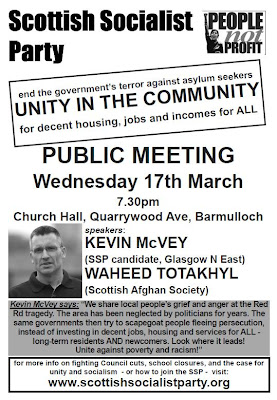 We demand a full public inquiry into the circumstances -including whether the
government’s Borders Agency enforcers were in the area, and if they had been banging on the family’s door just before they died - as neighbours claim.

This human tragedy highlights the inhumane treatment handed out by government authorities to people genuinely fleeing persecution, torture, poverty in their native countries.

Asylum seekers are dumped in the worst housing stock; Red Rd flats are so dilapidated that they face demolition.

They are banned from working, expecte to live on £35 a week - after the Labour government slashed their pittance from £42 a week.

They live in fear of dawn raids, dragged into Dungavel detention centre, deported to certain death in the countries they fled. Sections of the press, egged on by the Tories and New Labour, have tried to whip up divisions between asylum seekers, refugees and long-term residents. They try to play on the anger of communities deprived of decent housing, jobs and incomes - scapegoating asylum seekers for mass poverty and unemployment.

The vast majority of Glasgow people don’t fall for these lies.

They know there was appalling housing provided by slum landlords and the council
long before the asylum seekers arrived.

They know these people - many of them highly trained professional workers - are
not even allowed to work, let alone “take away our jobs”.

They know that many families in Glasgow are descendants of previous waves of
refugees and “asylum seekers” - who fled famine, persecution, war and poverty in
Ireland, the Scottish Highlands, Italy, etc.

The SSP has a proud record of defending human rights for asylum seekers and refugees. Our MSP Rosie Kane dealt with hundreds of cases in 2003-7, fighting
evictions, destitution and deportations.

We condemn and oppose the barbarism of the Asylum System - which chucks young
children into prisons, lifts them out of school into flights to countries they never
knew - where their families face violence and sometimes death.

The SSP campaigns for unity in the community - to fight together for better
housing and services.

Unity is our strength!

Attend the public meeting - mourn the deaths of victims of the government agencies’ terror.

Unite against deportations, poverty and racism.

Join the SSP for a Scotland that offers the hand of friendship - not the fist of fury.