Jo voted for war - against her Constituents wishes.

Far from NOT being a vote for war, as some like our local MP Jo Swinson have billed the recent Syria motion that was defeated in Westminster, a yes vote would have meant that attacking Syria would have very much been on the cards.  The resulting no vote actually stayed the murderous hands of the US military as well as our own for long enough to ensure that Assad was talked round by the Russians and his chemical arsenal is now being destroyed by international experts. 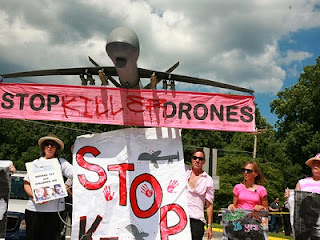 Jo, as I wrote in a blogpiece, here had a dilemma - she says her instinct is to vote against war, but thought that the international community should be able to rain down from sky borne drone and missile, it's moral authority and disregard the wider authority of the United Nations.  She says as much in the blogpiece.

There is a dichotomy - a contradiction actually - in her words and in her actions.  There is definitely a contradiction in her "relief" at a UN "approach"; the fact that the motion did NOT give the UN primacy and the fact she actually feels that the UN is not the place that the final decision would be made.

On the contrary - Swinson felt that an undefined "international community" should be able to act without the consent of the United Nations.


Who are this "international community?"  The proposed action, of course, was proposed by the US.  An action the UK colaition did all they could to support.  Does Jo think that this country and the US have the moral authority to act alone in intervention in civil wars because other countries like China and Russia have "...such scant regard for the human rights of its own citizens?"

I won't defend obvious human rights abuses by China and Russia - but do we wield moral authority like Gods of Gods? Is she implying the moral authority of the UK is without stain?

The US - a country that has jailed Bradley Manning, the Cuban 5 and many without trial in Guantanamo Bay is unquestionably a moral authority above the rest?  Really?

And our country that has recently carried out human rights abuses such as the police killings of Jean Charles de Menezes, Azelle Rodney and Ian Tomlinson; the torture and the deaths in UK armed forces custody of Iraqis such as Baha Mousa;  historical torture of Northern Irish political prisoners and the shootings and beatings of demonstrators there; the alleged collusion of security forces in the killings of lawyers, Pat Finnucane and Rosemary Nelson; the death in custody of the refugee Jimmy Mubenga and the continued detention of child refugees, despite assurances from the Liberal Democrats that this practise would stop. Or is it just because we are Western English speakers that gives us moral superiority?

I really am at a loss to see why we above the others are purest.  The list of human rights abuses carried out in this country goes on - but you get the picture. Jo believes that our Government, along with the US, have the moral right to police the world. The fact is, Russia nor China are muscling in on the middle East in quite the same militarist, missile laden and murderous drone way we are.

As well as that, Jo, in her letter below, admits that "all [of those constituents who contacted her prior to the vote]were against the UK taking military action in the immediate future..."

Yet, she felt she had the moral authority to

1. keep the military option live by voting yes and

2. by open admission in her blogpiece, ignore the UN if China and Russia had blocked a UN motion to take action ("I accept that the doctrine of ‘Responsibility to Protect’ can mean that action to prevent humanitarian calamity is appropriate.  I don’t accept that a country like Russia or China that has such scant regard for the human rights of its own citizens should always be able to stop an otherwise united and outraged international community from acting in extreme circumstances.")

All of the nonsense in the email below about her voting for this motion because it was not a direct call to arms is negated by her want to disregard how the UN security Council would have most likely voted - ie. no to military intervention in Syria.


Nick Clegg's stuttering and obfuscating on the night of the vote, when asked if this motion would mean that their would be a further Parliamentary debate, in my opinion, meant that the House voted no.  Clegg swung the vote through the perception of his dishonesty.  A man few in the UK now trust.

Of course he couldn't guarantee that such a mealy mouthed motion would stop the PM bringing us to war by, for example the use of the Queen's Prerogative as Blair did in 2003 when he ordered "our boys" in to Iraq (the Queens Prerogative is a power that should have no place in a modern Western democracy; a power that it is used as a smoke-screen by ministers to obfuscate the use of power for which they are insufficiently accountable and a power that has brought us to war despite the democratic wish of the people or its elected representatives, of the UK).


Jo Swinson has, over and over again, been seen to vote against what the people of East Dunbartonshire first voted her in on.  The Liberal Democrats once proudly boasted their record on voting against war. Jo, swung by the ambitious ex-Tory Nick Clegg has voted against the council of her own constituents. From University fees through to the privatisation of the English NHS, her support for the impoverishing and dreadful welfare bill, some of which has been highlighted by the UN as it expressed it's "shock" at how aspects of it were pushing people into poverty; to rely on foodbanks and to suicide.

So much for the coalition adhering to the advice of the UN.

I have reproduced the email I received from Jo below.  Our original FOI request is at the bottom of this article.

Her statement that it "was not as straightforward as constituents asking me to vote yes or no," would be laughable if it were actually not so sinister.  This was a vote for or against keeping the military on standby - and in fact more than that - it allowed the military to begin a build up towards intervention - an intervention she knew would happen.

If not, she is self deluded about her responsibility to her constituents.

She obviously thinks she has the authority to overrule the electoral authority those who voted for the "anti-war, anti-tuition fees, left of Labour" Lib Dems.

Thank you for your email.

As an MP handling correspondence from constituents, I am not subject to Freedom of Information legislation (but I will do my best to answer your question nevertheless). If you want to make a Freedom of Information request to my Department (which is subject to FOI), details of how to do so can be found here: https://www.gov.uk/make-a-freedom-of-information-request. There is no reason that constituents should attempt to contact me at the Department, however, as I publicise this email address as my constituency address. Personally, I am not aware of any constituents having contacted my via the Department about this.

To answer your question, many of the emails I received where before the motion we were due to vote on was even published, and of those that were sent afterwards hardly any referred to any specifics of the motion itself. Therefore it was not as straightforward as constituents asking me to vote yes or no. In fact from the comments I received I think many people were under the impression that the House of Commons would be voting on military action, which of course as you know, we were not.

You will note, for example, that the motion we were voting on did not permit the UK carrying out military action alone unless a further vote had taken place, and called for the UN weapons inspectors to be allowed to finish their work. Many of those who emailed me argued along similar lines. Whilst all were against the UK taking military action in the immediate future, many people attached conditions in which they felt military action would be justified, whereas others simply stated that there should be no military action at all.

From the end of July until the evening of 29th August (when the vote took place), I received 57 emails from constituents on this issue. This included several from people who emailed more than once. Of those, 22 were sent prior to the motion even being published at 6.55pm on 28th August, and so could not have been specific to the actual motion. Of those sent after, the vast majority continued to comment on the issue generally, rather than the specifics of the motion.

The media so often like to present such matters as ‘for’ and ‘against’. However, these issues are generally more complex than that and I felt I had a responsibility consider what we were actually voting for: a motion condemning the actions of the Syrian regime in using chemical weapons against innocent civilians, noting that the UN weapons inspectors be allowed to finished their work, and noting that no military action would be taken without a further vote. There was nothing I disagreed with in that.

I hope that this answers your question. However, please do let me know if there is anything else I can assist with.