Young people at the forefront of the struggle; 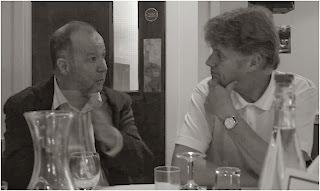 Young people are at the forefront of today’s struggle for a better way to run society as they are the group who are suffering the deepest from the consequences of the present crisis of the capitalist system. A’ lost generation’ is no cliché but the hard reality for growing numbers of young people who are to be thrown onto the scrapheap at the very start of their working lives. No wonder we see the effects of disillusionment, anger and alienation. A university degree no longer leads on to a well paid secure career, as it once did. In fact the numbers attending further education is on the decrease thanks to the cutbacks in staffing and the economic hardship involved due to ever increasing fees, particularly in England and Wales. It is clear that the capitalist system does not now require large numbers in the workforce to be highly skilled and educated when the economic requirements are for primarily low wage low skilled part time jobs to compete with Asia. For example, in America the vast majority of the recent jobs increase is part time. Many of the jobs in this market have already been outsourced to cheap labour economies and this is now the preferred path for western countries. 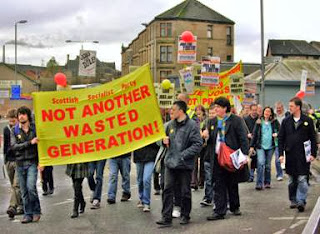 This sense of alienation and hopelessness in young people is found expression in destructive activities like the austerity riots in Britain a few years ago but also in more constructive reactions in the form of grass roots revolutionary movements, as witnessed recently in Tunisia and Egypt. This level of working people’s disaffection has not expressed itself to the full as yet, particularly in the more conservative Western European countries with a background of illusory ‘democracy’ such as in Britain and Ireland. Nonetheless beneath the surface there is a pressure building, within the young people in particular, for more radical measures however this tendency for action is devoid of any true political leadership or tactical awareness. This role would normally be provided by the workers union movements however the unions are no longer working for radical change but would prefer to go down the ‘reformist’ path of working within the existing political apparatus to achieve concessions from whichever government is in power.

Young people have therefore been backed into a corner and are under attack from all western governments. In Britain many have no alternative but to accept the prospect of zero hours contracts with no certainty of a secure employment, or with part time work on minimum wage levels with little prospects of career progression. Many face unemployment after years of study. More and more employers are taking advantage of the young unemployed and exploiting them to increase their profit margins.[Soon if the Government has its way young people will be made to work for nothing for their benefits, a modern form of slave labour] . The argument that this provides a flexible labour market which is presently needed is not credible as this is purely and simply a way for the employer to increase profit margins with no benefits to the employee. Higher unemployment always means lower wages for those in work. This situation is remarkably similar to feudal times when the serfs were at the beck and call of the landowner. The sporadic nature of this type of zero hours employment makes it extremely difficult for the young or any worker to organise into unions to defend their interests and also prohibits planning for a stable social or family life. 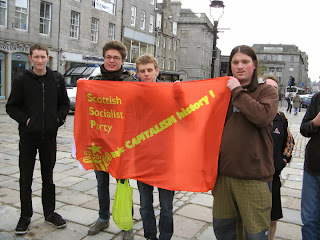 Young people are constantly fed the lie that the jobs are out there and that they are not trying hard enough. We all know this is a myth and that many young people are now so desperate that it is now commonplace to find the majority of a workforce employed on a part-time basis and that many have to combine a number of part time jobs to pay the bills.

The media also play their part in the demonization process by falsely announcing the end of the recession after barely recognisable decreases in the unemployed rate. If the young can merely wait another ten or fifteen years for the recession to end then all will be fine, however by that it time it will be too late for a lost generation forced to put off having a family or being independent of their parents. Deception is the primary motive here and this is in the form of the financial trickery used by the economists on behalf of their masters in government to delude the general public into thinking that the main economic indicators are better than they actually are. For example, manipulation of the unemployment figures has regularly taken place since Thatcher in the form of the redefinition of unemployment to include only those who claim benefit. Originally this figure included all those who registered and for whatever reason may not have claimed. Those on workfare or disability/ incapacity benefit [ now Personal Independence Payment]also do not count thereby removing nearly a million from the national figures at a stroke.

Overwhelmingly, it is clear that the economic picture for young people is bleak and that the levels of real unemployment is much nearer the level of Spain or France and that regions of the country in the northeast and the west of Scotland are suffering badly.

The question which young people must ask themselves is why should they support and try to mend such an economic system which would assign them to the scrapheap if it could. What have they really got to gain from slogging away  a working lifetime for a zero hours contract job or behind a call centre desk ten hours a day for just enough to merit the basic essentials. Is this the most that they will be allowed to dream of as their future to look forward to? This is probably the first generation to which the answer to this question must be no, it is definitely not worth fighting to support such a system. 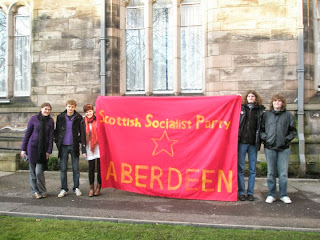 What then is the alternative? It is for a more rational, progressive, enlightened, sustainable and democratic social system which plans ahead for the future needs of the society based on a truly democratic workers participation and local control by those that actually produce the wealth of society. Young people must and need to fight for such a system based on these principles for in this way it is perfectly possible to provide adequately for all of societies basic needs in terms of housing, employment, education, health and most importantly the planned economic production controlled by the working people and not for the benefit of the parasitical elite, as presently exists.  The continuation of the present government policies will only see young people become  angrier and alienated which will eventually result in more social unrest as was evident two years ago. However this anger to be effective has to be harnessed and channelled in a positive way, and be informed and focused on achieving political change in the form of a socialist transformation of society. This is not a utopian dream but can be achieved with the involvement of young people being organised and forming part of a wider movement of workers, the unemployed and exploited sections of the population on low pay and zero hours and part time insecure contracts. The traditional mass workers party was the Labour Party however it has unfortunately lost it way and been taken over by the most vocal supporters of the present system. It is full of professional and careerist MP’s who are disconnected from the interests of working people or however well meaning are deluded into thinking that reformist policies are a way out until the next crisis, but having lost a whole young generation to the scrapheap in the process. 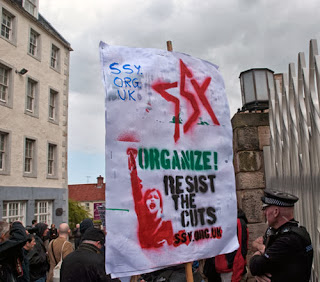 No, now is not the time for young people to go down the same mistaken route as those before them, but to join a socialist movement like the Scottish Socialist Party and become part of the struggle to achieve socialism. Young people should seek to become aware of the basic socialist principles as some theoretical understanding obtained from the great socialist thinkers of the past and present form a theoretical foundation which is important for any successful struggle. However young people more importantly need to be involved in whatever way they can through student bodies, workplace groups if union involvement is precluded and forming linkages internationally. The Scottish Socialist Party represents many different strands of left opinion and attempts to provide an organised, cohesive and effective political voice for both workers, the unemployed and young people alike.

We are now entering a new phase of this economic crisis where increasing numbers of working people and young people are becoming aware that the existing capitalist system is working against their interests [but for a small financial elite] and cannot be successfully repaired or reformed without their living standards continuing to fall to an even greater degree as the true extent of the crisis is much greater than many had previously believed. They are aware that even if a new partial economic ‘recovery’ is entered into in the coming years it will be of no benefit to that lost generation of young people thrown on the scrapheap as a sacrifice to the wealthy and privileged few. Increasingly it is clear that the previous gains fought for and achieved by the older generations of workers are being rolled back never to be seen again, that is, unless something radical emerges in the form of a strengthened and confident socialist movement organised with a leadership, strategy and tactics with linkages to other likeminded movements internationally. In this process it will be the young people who will be at the forefront of this struggle for change. The Scottish Socialist Party is that socialist movement to take forward the struggle and reaches out to young people to welcome them to the Party and to join them in this journey.
Posted by Campsie Scottish Socialist Party at 10/18/2013 09:00:00 pm