(this article originally appeared in the Scottish Socialist  Voice HERE) 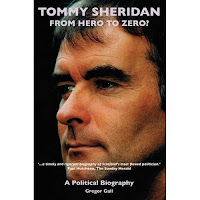 Gregor Gall’s Tommy Sheridan from Hero to Zero?: a political biography of Tommy Sheridan aims to present “a study of the person, the personality and his politics and the dialectics between them”. Gregor claims “Putting together the voluminous interviews, the personal observation and the various secondary sources means that this biography comes as close as it (sic) possible in terms of source materials to being a definitive and authoritative biography as possible.”

Hero to Zero? is certainly well-researched, with exhaustive references and footnotes, and it contains a lot of useful information. It is also an honest attempt to analyse and understand why “Tommy brought himself down not over NoW’s allegations about his personal life but over the way he chose to deal with these. He was, thus, convicted of perjury about telling lies in court about visiting Cupids and having a sexual relationship with Katrine Trolle, and not about visiting Cupids itself or having a sexual relationship with Katrine Trolle.”

Gregor Gall started his interviews and research for this book prior to ‘Tommygate’; his description for the period after the 9 November 2004 SSP Executive Committee meeting asked Sheridan to step down as party convener when Sheridan chose to use the courts, to coin Alan McCombes’ phrase, and build a ‘tower of lies’. Without Tommygate, the book would have been ready by late 2005 and it would, of course, have been a very different book. The consequent change of direction is perhaps a factor in explaining why the resulting work often appears disjointed and even inconsistent.

The strengths of this biography are in the coverage of Sheridan’s early life, his formative influences and his political development from the anti-poll tax campaign, through his years in Glasgow Council to the early years of the Scottish Parliament. Hero to Zero? also deals with the dynamics of the rise of the SSP as a collective campaigning party and the positive and crucial role played by Sheridan at this time.

When considering the opening of Tommygate, Hero to Zero? is mistaken when it implies there was an agreement that Sheridan could take out the libel action from the time he stood down as party convener. Sheridan was certainly asked to stand down for intending to go to the courts and lie. However, the party leadership repeatedly tried to dissuade him from pursuing his action in the courts.

Gregor’s interpretation of Sheridan, the ‘Person, Persona and Personality’ will appear to many, myself included, as unsubstantiated and even simply wrong. Gregor strongly argues against the position that “..Tommy had brought himself down through his own vanity, arrogance and delusion. While there is evidence of vanity, .., it was not this or his alleged arrogance or delusion which explains Tommy’s actions.”

Instead, Hero to Zero? argues that Sheridan’s “faulty political calculation” over Tommygate was a consequence of him “.. making his destiny synonymous with that of socialism in Scotland ..”. Gregor does highlight indications of this as a possible motivator for Sheridan in the early passages of the book dealing with the pre-Tommygate period. Yet, even the evidence presented in the book for the Tommygate period just doesn’t back him up. In Gregor’s own words “… between 2004 and 2010 he (Sheridan) spent more time fighting the left than he did the right.”

Gregor argues, with hindsight, that the SSP should have spiked Sheridan’s guns in November 2004, publishing the Executive Committee minutes detailing why Sheridan was asked to stand down as convener. With hindsight, few will argue with this and there is certainly a lesson to be learned by the party in this regard. At the time, however, most party members, myself included, felt that in 2004 Sheridan was still motivated, at least in part, by promoting the socialist cause. It was felt that it would be best if Sheridan could be dissuaded from continuing with his kamikaze court actions. Indeed, Sheridan even told Alan McCombes that he would drop the legal action if NoTW did not back down. In November 2004, there was probably no one who imagined that Sheridan would, within 18 months, in pursuit of his flawed legal action, devote most of his political energy towards attacking the SSP with such ferocity and venom.

Hero to Zero? catalogues many accounts of Sheridan’s sexist behaviour, asks if he is a misogynist and then leaves the question hanging. The emphasis is on accounts of Sheridan as a ‘sexual predator’ during the Militant era. Here, Gregor does not draw on material documented elsewhere in the book that could be pertinent; such as Sheridan’s declarations of intent to ‘destroy’ women who he had a sexual relationship with but who refused to perjure themselves in court on his behalf. It also ignores the public humiliation that they suffered at the hands of Sheridan over 2 court cases.

When the book considers the question of the ‘cult of the personality’ around Sheridan it again concentrates on the pre-Tommygate period. Gregor says it is doubtful if Sheridan himself consciously nurtured this status at this time. Instead, the emphasis is on the “heavy responsibility” of the SSP and its forerunners in promoting Sheridan in what is described in the book as “a bargain with the devil”. There is unlikely to be much controversy around these points as, for the past 6 years or so, it has been widely acknowledged in the party that it made a mistake in promoting so much of the socialist message through one individual.

Yet, the biography does not seriously examine the ‘cult of the personality’ around Sheridan from the split in the SSP onwards. There is a recognition that most of Tommy’s supporters know he was lying throughout Tommygate. The biography details how, time after time, Sheridan bounced his followers into a course of action that even they did not initially support. Even amongst those who went on to form Solidarity, outside his immediate circle of family and friends, few initially believed that Sheridan should take out his libel action. Almost none of Sheridan’s supporters wanted to split the SSP but they still followed when a split was declared by Sheridan. Gregor explains this by saying “..his supporters thought they were defending the Tommy of old, not the Tommy of new.” Gregor concludes that the biography has “pursued a middle way” as it is neither for nor against Sheridan. He states that he is adopting the dialectical method by recognising Sheridan as being simultaneously both hero and zero. This conclusion does not seem to sufficiently take cognisance of much of the evidence in the book that, with Tommygate, and in particular after Sheridan’s open attacks on the SSP from May 2006 onwards, the balance between Sheridan being motivated by actions for the benefit of the socialist movement and by being motivated by narrow self-interest, decisively and qualitatively changed.
Posted by Campsie Scottish Socialist Party at 3/27/2012 07:28:00 pm