Elect a socialist in East Dunbartonshire...

place a number 1 beside the socialist candidate!

The “mainstream” political parties are draining Kirkintilloch, East Dunbartonshire, Scotland and the UK in general of taxes that should be going towards helping people.  In England, the Tories and Liberal Democrats have overseen the selloff of the NHS to the likes of SERCO, a company who are involved in military and nuclear weapons contracts, detention centres and prisons. This hardly fits with the Doctor mantra, "Do no harm..."  Our local council – ran by an unholy alliance of Tories and New Labour, (and still suffering from the neglect of the previous Liberal Democrat led administration) have overseen the paying off of vital council staff from classroom assistants through to librarians, yet pour millions of our Council Tax into paying interest to corporations who are profiteering from schools and hospital builds.  The council is the first line of defence from the profiteers who are trying to turn our services into “for profit organisations,” rather than “care, education and fairness.”  An SSP councillor will fight to ensure your taxes are spent on vital services rather than servicing profits.
Scottish Socialist Party councillors will always put first the interests of local people and; communities; Scottish Socialist Party councillors will demand and will present balanced ‘No Cuts’ budgets and unlike other parties, SSP councillors are prepared to do whatever it takes to deliver a better deal for local people through protected and enhanced services and public sector jobs. 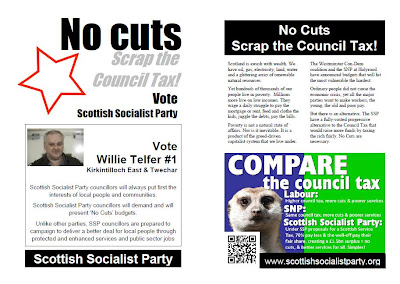 I am 46, involved in both the Healthy Living Program and my local Town Hall

As a socialist, I believe in a system that help people not one that is about a minority of people making extortionate profits by keeping people poor.  If elected, I will always put first the interests of local people and communities and will present a balanced ‘No Cuts’ budget – budgets for the people, not the bankers.

Unlike other parties, all SSP councillors are prepared to campaign to deliver a better deal for local people through protected and enhanced services and public sector jobs.

SSP Councillors will stand beside communities being attacked and will defend them in a practical way both inside the council Chamber and outside. 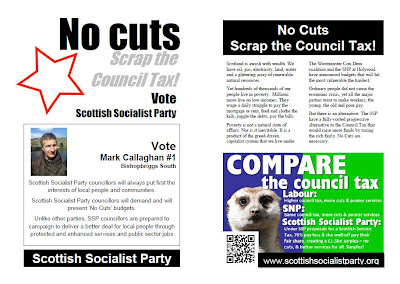 A local teacher, Neil Scott, is standing in the May elections against what he sees as the mismanagement of Council money and unnecessary cuts.  He said in a statement, “East Dunbartonshire has, in recent years, had the misfortune of having had a Liberal Democrat Council followed by a coalition of Labour and Tories.  The mishandling of the council by these three versions of the same thing has seen an attempt to close schools in the past two years; terrible deals with corporations that have meant millions of pounds of our Council Tax money being given over to massive PPP/PFI “Guaranteed returns on investment” for minimum outlay; a decimation of our local services from Libraries through to schools, and more.  If any of these parties gain the council in May, there will be more of the same, and in fact the deferred closure of East Dunbartonshire Schools will go ahead.

As a father and a teacher I have a different vision for East Dunbartonshire services.  Our area is a well off council area, one in which money could be invested in our services rather than further job-losses and cuts.  I see a clear need to renegotiate PPP/PFI deals.  Some of these venture capitalists are making millions of pounds of our tax money with investments of a few hundred pounds.  I see East Dunbartonshire being a place of opportunity for all; a place where our money is invested in real jobs and services which will help stimulate the Scottish economy.  The real drivers of any economy are people.  The profits creamed off by corporations from our Council tax should be reclaimed and invested in real jobs and in our people.” 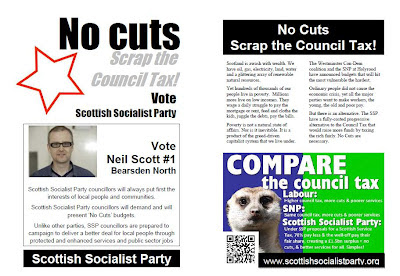