From the Camp... Welcome to the Camp!

Faslane Peace Camp is a protest site against the ongoing travesty of Trident, the British nuclear weapons system, based at the Faslane Naval Base on the Gare Loch. The British Nuclear Weapons Programme consists of four  nuclear powered Vanguard Class submarines, at least one of which is on patrol at all times as a continuous at-sea deterrent, armed with up to 16 Trident missiles and around 48 nuclear warheads. 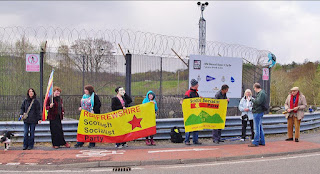 As a body of resistance to nuclear weapons, the camp is somewhat of an anomaly. There is no organisation known as Faslane Peace Camp as such, rather it is a collection of caravans at the side of the road with the potential to facilitate low impact community living and direct action. Any activity or inactivity emanating from this place is the sum total of the efforts of those living here at any given time and the population tends to be quite transient.

In the past this has been the camp’s strength, a constantly changing population provided continuous renewed energy, ideas and inspiration for Direct Action. As the police found new ways to combat the protesting techniques, the campers came up with more ingenious and creative ways of making their point. (It is often said that the Faslane Ministry of Defence cutting team who remove “lock-ons” during blockades of the naval base are the best in the U.K!)

However, in recent years, with the anti-nuclear movement failing to engage with a new generation of potential activists coupled with the youth of today facing a new and profound dispossession, and bombardment of injustices daily, our movement lacks the youthful momentum it needs and once had. This has seen the camp go through long periods of neglect and inactivity and sometimes fall into the wrong hands in terms of what is good for the movement and the camp.

Currently there is a small group of us here trying to combat this. We are committed to regenerating the camp to be a centre for non-violent direct action against nuclear weapons. For most of us, nuclear weapons are not our only concern, we see inherent flaws in society, the government and ‘the system’ in general and try to govern ourselves in a way that makes the camp an alternative to the mainstream, a microcosm of how we feel society ought to be governed. Namely adhering to the principles of self governing anarchism, collective responsibility and living without mains electricity and trying to fulfil our needs without recourse to consumer goods. This is sometimes known as anarcho-primitivism. 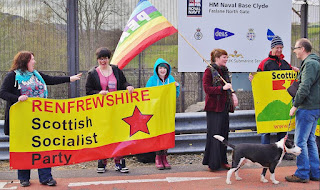 All decisions at the camp are made during regular meetings through consensus based decision making. This means that everyone must agree to the decisions made that affect them and the group as a whole and applies to important issues like what direction we are taking the camp in right down to trivial day to day decisions like what goes on the communal shopping list. Whilst we do not agree with imposing rules, we do need to maintain the camp as a safe space and healthy environment for direct action, and so, we have no alcohol, residency and safe spaces policies in place.

In terms of  effective direct action against the Faslane Naval Base, with a current population of five, there is seldom enough of us here to do anything like blockades or trespasses. Currently our anti-nuclear efforts are geared towards educating people on the issues around Trident and getting people here. We approach different groups to do workshops with them on Trident and International Law and Non-Violent Direct Action and apply for funding to travel far and wide to deliver these workshops. We view the Peace Camp as a facility for protest against Trident, and so, we facilitate groups to come here and take action by providing sleeping spaces, vegan food, legal support, action training and of course joining in!

We will be marking the 30th birthday of the camp this year by having a campaign of 30 days of direct action against nuclear weapons. We have been choreographing groups from all over the UK to come and take action with us and from the 9th of June to the 9th of July there will be daily actions happening involving all kinds of shenanigans from activist clowning, an academic seminar road block, activist choirs  to a Peace Olympics blockade! 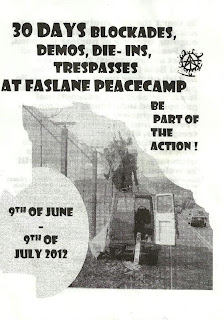 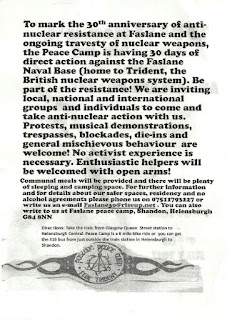 With Independence on the political agenda, an independence that could potentially entail the removal of the British nuclear weapons programme from Scotland, it is imperative that we keep a public debate on Trident open and to this end we need to make public displays of protest against this abhorrent weapons system.

In taking non-violent direct action, with little or no personal consequences, we are breaking minor statute laws to uphold international law. Nuclear weapons are illegal under international law, an ICJ court ruling in 1996 stated that even the threat of use of nuclear weapons would be contrary to the principles of international humanitarian law, as would the maintenance and upgrade of current nuclear arsenals. The UK committed itself to nuclear disarmament when it became a signatory to the Non Proliferation Treaty in 1970 and has subsequently made a mockery of it’s obligations under the NPT. Ironically, the very treaty our government invokes in it’s quest to prevent other states like Iran and North Korea from obtaining the same technologies.


If the nuclear weapons are removed from Scotland there is nowhere else as strategically sound for them to be placed within the UK. The Trident system already costs £5billion per year and is said to need replacement to the tune of £100biliion. It is thus likely that the further cost and time it would take to recreate the facilities at Faslane and Coulport would  also widen the public debate on their very necessity in a time of so-called “austerity“. It is therefore not a stretch of the imagination to suggest that Scotland is key to setting the ball rolling on world nuclear disarmament and, we, the people of Scotland have a duty to exercise our collective power and make ourselves seen and heard in our fight against nuclear weapons.