Cameron, the rich, on Social Justice

Let’s be clear about something when David Cameron speaks about “broken Britain.” It was the Tories wot dun it. 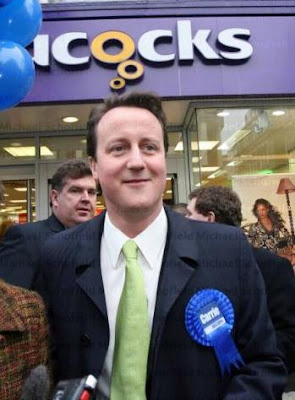 What Cameron thinks of poor and working class who are being persuaded to vote for him by Sun, Times and Daily Mail - photo by photographer Michael Schofield


When was British society at its most “happiest” using measurable scales?
During the noughties?

It surely can’t be the Thatcherite ‘80s?

The year in which various health indicators have shown that the UK was at it’s happiest was 1978. The year BEFORE the Thatcher victory. The year of the so called winter of discontent.

Because that is the year when the UK had reached its highest level of equality and social mobility.

Of course, this is something the Murdochracy ,the Tories and the New Labour project do not want you to know.

What happened in between then and now?

Well – Thatcher and her Government decimated our society; wrecked our manufacturing base; destroyed mining towns and villages; made no-go areas of our inner cities; created a society where rather than feeling safe and happy, people feel they need to walk on each other – and kick each other down - in order to succeed – or at least to feel they are succeeding.

Surely the Labour Party changed this?

Well, let’s be fair. The Labour Party, according to social and health indicators, did not destroy society on quite the same scale, but the fact is, they did little to address the gap between rich and poor. They continued the Thatcherite/ neo-liberal project that ensures the people on the bottom struggle and work the hardest to feed themselves and their children, but receive the most “jip” – being called lazy or worse, dismissed as some sort of genetic “underclass.” And all the “main” political parties are turning to the poor to pay off the rich bankers debt by cutting their services and their chance of a job.

Back in the early eighties when I started working, the Thatcher project was only beginning to show its teeth. There were still communities of council housing where the unskilled worker lived side by side with policemen, nurses, tradesmen and women, public service workers – REAL communities. People could decide how to spend their money – either on a mortgage or on renting a decent house. And every family who needed a house could get one without a wait or having to scrape deposits or risk 95% / 100% mortgages. The current housing system sees young people unable to get a house either from the council – or onto the “property ladder.”

Those of us who “failed” in school (failure being part of the educational language at the time – some good things have happened educationally in the meantime…) could find unskilled – well paid – jobs in factories. Education was not quite the market it has become where people with qualifications within a percentage point of each other compete for precious college or University places.

Nowadays “failure” is on the part of society – the UK Thatcherite/ neoliberal economy has meant our young people are failing to find jobs because, let’s face it, there are few of them. And there will be fewer as the Public Sector are made to pay in jobs and funding for the failure of the much vaunted private sector (the private sector – let’s face it – who caused the “crisis”).

What is a fair society? Is it this scrabble for the pieces the rich throw down from their table? 2% of the people in country benefit from the current system – the very rich – the Cameron’s, Murdoch’s and Rothermere’s who are telling the rest of us we must cut cut cut and live in austerity. When, apparently, times were good – before the “economic downturn” (or the rich rip-off to term it properly) we were told we needed cuts in our pensions/ public services/ pay. Now times are bad, we, the majority of this country are told we need to cut back even more. So when were these good times? For the majority of the country, it seems that the “good times” were just times when the rich were getting even more rich than they are now while shafting the rest of us(the rich in this country made over £300bn extra bucks in the last year, while the rest of us are asked to suffer for their greed).

Why do we not hear any of this in our press?

Well, our press is controlled by the very rich.

Lord Rothermere, whose Daily Mail daily attacks the poor and working class, and who supports the Tory “austerity” drive, ie. the drive to impoverish the poor even further in order to make them pay for the rich’s greed, pays NO TAX in this country.

Why? Because he makes his money here, but is “non-domiciled.” The man is worth nearly a reported billion pounds… yet pays nothing to our society only bile through his working class bashing rag.

Rupert Murdoch not only avoids tax in the UK on his incredible fortune, but has been cited in various tax avoidance cases in the US and Israel to name two. Murdoch is reportedly worth £7bn – but pays no tax here – in the country his Sun and Times target the poor for cuts – and the “austerity” Tories as their party of choice – the party that ruined towns and villages across the country in their “greed is good” philosophy.

As I have said in another article ( HERE ), Twitter and other outlets for real people’s opinion have turned the tables. But not completely.

The Tories and Labour – and the SNP in Scotland - all want one party rule – their party. So they, in their various ways, ensure the smaller parties – or the left - or the sensible – or those purely wanting fairness - have little exposure in societal debates and discussion. This not only happens through the billionaire supported and opinionated press ignoring the Lib Dems or the Scottish Socialist Party, but also in ignoring poverty charities such as Child Poverty Action Group, or damning reports about equality such as the Black Report or more recent work by Richard Wilkinson and Kate Pickett ( see HERE and on the election HERE) and perhaps seemingly less important, the legislation against placarding streets during elections.

Look out for legislation against certain types of blogging or twittering or opinion pieces in the future as the greed driven Thatcherite poverty bashing parties and billionaires all panic.

And as far as Cameron’s “social justice" message this morning, in the words of the young woman who heckled him yesterday, “I don’t believe you.”

"The year in which various health indicators have shown that the UK was at it's (sic) happiest was 1978."

Yes, that was the year of the winter of discontent. Yes, I remember it VERY well. I got married in it. And that isn't the only reason why it was shit.

The following year was a landslide victory. It must have been because people were so happy.

It wasn't because of Maggie's charisma, she didn't have any. She was a well 'ard cow.

She was elected because Labour under Callaghan (nice but dim Jim) had been forced to ally with the Libs (see a pattern emerging?) and the unions (bastards) didn't like it, so they brought the country to its knees (pattern again?)

Maggie inherited this shit, as Cameron is almost certainly going to inherit today's helping of guano.

Maggie wasn't perfect. In fact she went mental, like they all do. She made 3 fundamental mistakes, 2 of which were recoverable (poll tax and stopping corporal punishment) and one that wasn't (giving everyone their council house, which had been subsidised for years, for a song).

Shame. And I suppose the Channel Tunnel didn't help.

The reason people can't afford to get on the housing ladder now is that the price of the buggers has rocketed because they are a god. And whereas the better off people could have done, they can't now because they're paying for the less well off to have as many kids as they can to get more benefits and lovely lovely tax credits, so they can overpopulate the country and thus increase the demand so make them even MORE expensive.