The Scottish Socialist Party will be standing in 10 seats across Scotland at the general election on Thursday 6th May. 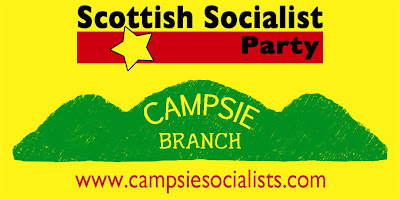 The SSP general election campaign will offer a real alternative to the policies of the party’s of big business at the election, and put socialist policies firmly on the agenda in Scotland at the General Election.

The Scottish Socialist Party is standing in the General Election on a programme of resistance and defiance of Westminster cuts, emergency action against youth unemployment;
an end the war in Afghanistan, & an independent Socialist Scotland.

All SSP candidates are committed to taking only a workers wage, and are opposed to the obscene expenses and salaries of Westminster MPs.

The SSP stands firmly on the principal of Workers MP on a Workers wage.

I am appealing to all members/friends & supporters of the Scottish Socialist Party directly to make a pledge or donation to the General Election Campaign Fund, to help the party raise the necessary funds to fight our General Election campaign.

You can make a pledge /donation to the general election campaign fund, in the following ways.

1. At your local SSP Branch meeting or directly to your branch organiser or branch treasurer.

2. Send a cheque made out to the Scottish Socialist Party Election Fund to the party's national office @ 93 Hope Street Glasgow.

4. E-mail me @ jimmcvicar.scottishsocialistparty@hotmail.com & let me know the details of your pledge /donation and I will make arrangements to get it collected.

I appreciate it is a difficult time financially for comrades ,but every penny & pound is vital for the party's election campaign to be successful and every pledge /donation is appreciated and will go directly to finance the General Election Campaign.

If you have already made a pledge or donation to the SSP Election l fund, thanks your contribution is much appreciated by the party.

Thanks for your support.
Jim McVicar.


The Scottish Socialist Party can only accept donations to the general election campaign fund from UK registered voters.