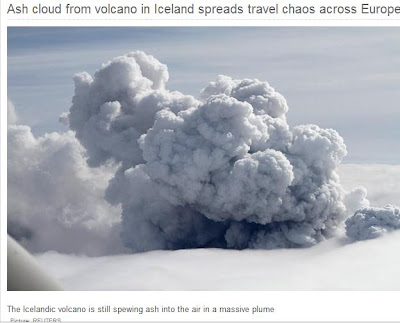 Europe has shut down, it seems. Airlines have been instructed not to fly because of ash being spewed into our atmosphere by Iceland (some have joked, because of the fact that Iceland was hit particularly badly in the capitalists ecomomic crash, the ash is from the Icelandic banks burning our money!)

In times of trouble, and when a friend is in need, we as human beings, neighbours, family come together and help each other. Tony Benn, the famous left wing Labour politician from the UK once spoke in Parliament on the ousting of Thatcher and against Thatchers famous statement that, "there is no society", and illustrated his belief that there very much is a society by way of his interupted train journey that day. He told the UK Parliament that at the beginning of the journey, the train was a capitalist train - all seperate, reading their papers, punching their calculators, not inter acting etc. But when the train broke down and they were stranded somewhere in the English countryside, the train became a socialist one - people sharing food, drink, talking, helping each other through the mini-crisis.

Lots of people stranded in countries far from their homes are acting in a socialist way - groups of travellors hiring buses etc in order to get home - the young helping the old and vice versa. Others working together to make sure the airlines give them their rights - meals/ hotel accomodation for three nights etc.

However, reports are coming in through the news - and through friends and family stranded in Spain, Malta and Greece - of hotels, as soon as the airline legal responsibility of 3 nights accomodation is up - bumping up prices. One friend has phoned me to say the hotel he is in in Alicante has more than doubled their price from 45euro a night to 110Euro a night. Prices a lot of working class people cannot afford as they had went on budget holidays to escape their daily working drudge.

Governments need to step in. The European Parliament need to act quickly and prosecute hotels, transport companies and food sellers who are now trading on people's misery.

This is not a crisis on the scale of Haiti or the recent earthquakes in other countries around the world. Nor is it on par with the poverty and misery caused by capitalist imperialism and the victims of market forces in Afghanistan or Iraq - and various other poverty stricken countries and warzones in the world.

It is, however, an illustration of the insidiousness of this disgusting exploitative system we live in. The airlines are already crying to Governments for "bailouts". Who will bail out the poor people now having to spend their hard earned savings - or those who have to beg from other people in order to survive in foreign lands away from family and friends?

There is an alternative to this system - and the more of us meet and talk and plan and force our political class to properly represent us against the machinations of capitalism, the more likely we will get change.

If you want change - we need a clean break from what we have now. The socialist train is a happier one - sharing and interacting. Let's hop on it!