Campsie Branch SSP members brought the fuel prices issue on to the streets of Kirkintilloch on Saturday with a petition calling on the Government to “Take the Profiteering out of Heating your Home.” Kirkie residents queued up in anger to sign the petition that said, “We condemn the 17% gas and electricity price rises - to bills of over £1,000 a year.”

One angry Kirkintilloch resident said, "I am so glad the someone is highlighting how greedy these companies have got. The executives and profit takers won't suffer, but ordinary folk in Kirkie are. We'll have to turn our heating down and sit in the dark in the winter while they make billions."

He went on, " Its time New Labour disappeared and the principle of taking the utilities back into the hands of the people was used to help people rather than banks like Northern Rock. Public ownership of the energy industry would cut prices; ensure we had a quick and painless switch to clean and sustainable forms of fuel; profits could go towards an investment of free insulation of every home and this in turn would help cut poverty and pollution. Sharing out the profit amongst the people of Scotland would improve lives from Shetland to the Borders rather than fuelling the 4x4's in Merchant City." 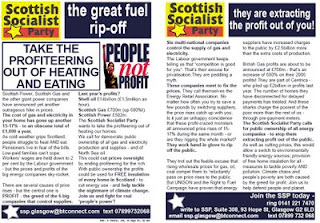 Click on the photo of SSP councillor for Leven ward, Jim Bollan to read his views about the scandalous behaviour of the "Elected Dictatorship" 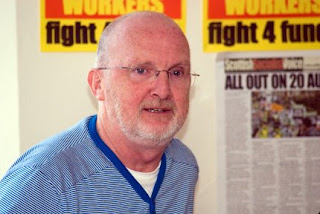 Click on the document below to read the Council Workers Voice: 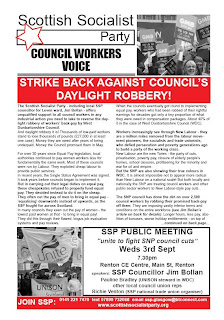 NO TO FINGERPRINTING IN SCOTTISH SCHOOLS!

CLICK ON THE FINGERPRINT TO READ THE ARTICLE ABOUT BIOMETRIC FINGERPRINTING IN EAST DUNBARTONSHIRE SCHOOLS, PROMPTED BY CONCERNS BY CAMPSIE BRANCH MEMBERS (Neil Scott, SSP Campsie member added, "In schools, we teachers are always told to think what the learning outcomes are for various activities in school. I would like parents, children and teachers alike, to think "what are the learning outcomes expected from fingerprinting our children?"): 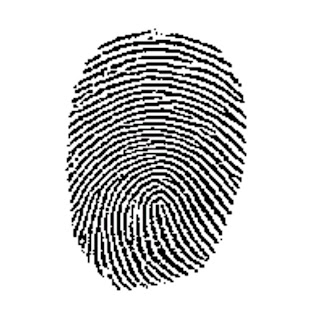 "I am appalled to read that biometric fingerprinting is being introduced into new build schools in East Dunbartonshire and that this infringement on personal liberty has already been introduced in Lenzie Academy and Boclair Academy without, as far as I know, any public consultation or any debate in the council chambers.

It is absurd to say that pupils can opt out of fingerprintin. How can the average 11 year old know the implications of such a move? Why have parents not been directly involved in this sinister development? Nor is it sufficient to say that safeguards are in place to protect the use of the data so obtained.

A glance at our Westminster Government's ability to lose extensive personal records shows how well protected databases are in practice.

It is a relief to know that at least one MSP has written to education secretary Fiona Hyslop for an explanation, but I would be more reasured if protests had been heard from our councillors and from our mainstream political parties.

I would think it important that all such biometric fingerprinting records should be destroyed prior to a public debate on the necessity, desirability and safety of such intrusive record keeping taking place."

Today Campsie Branch Scottish Socialist Party held street work in Milngavie gauging the effects of the fuel price rises and giving the residents of the town an opportunity to sign the SSP fuel prices petition. Again, the Party members were overwhelmed with the response. The people of Milngavie are every bit as angry at the fuel profiteers and the Government as those in (see HERE for a report about the stall in ).

Milngavie has a high proportion of retired residents, and pensioners we spoke to said they wouldn't be switching on their heating until mid October instead of September this year. One retired lady spoke about the fact she had worked all her life only now, in her late eighties, to be contemplating knitting a thick jumper and giving up her only luxury – bingo – in order to afford the price hike.

As in , at some points of the afternoon, people were queuing up to sign the petition and even when we ran out of space (we collected around 300 signatures in the space of an hour and a half) people insisted on signing the back of the sheets as we were packing up!

Bearsden SSP member, Linda Howie said, “Lot’s of people in have the impression that Bearsden and Milngavie is an affluent area. It is true there are well off people here – but there are also huge amounts of pensioners and families who have been hit hard by price rises in oil, gas, electricity and food.”

Lenzie member, Thomas Swann agreed and added, “the people of have been let down by politicians and profit takers. Today ordinary people in Milngavie showed how angry they are at this government’s betrayal of families, pensioners, the low paid and working parents.” 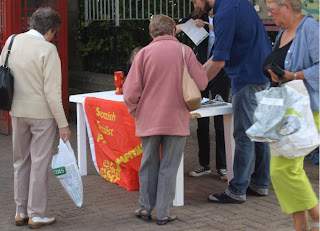 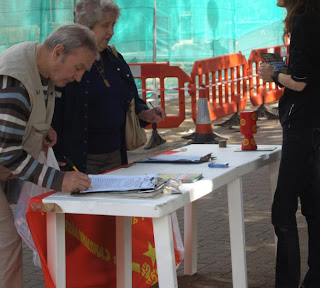 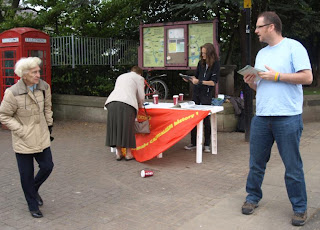 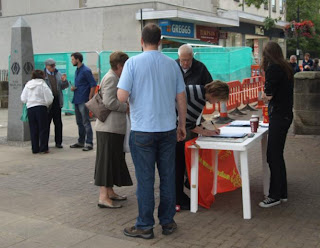 Milngavie residents sign petition as people voice their concerns about making ends meet over the winter to Thomas Swann.
Posted by Campsie Scottish Socialist Party at 8/08/2008 05:36:00 pm No comments: 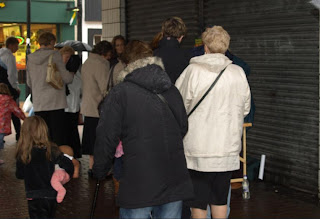 Angry Irvine residents mob the SSP stall. For most of the time during the stall the Irvine comrades were swamped with people three deep, clamouring to tell their stories of fuel hardship imposed by the profiteers and to sign the petition. 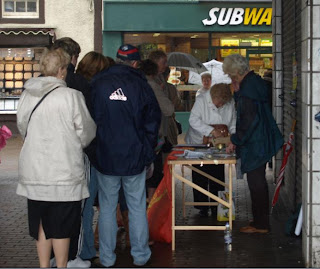 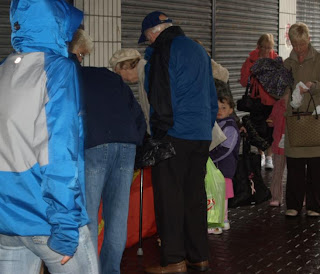 The streetwork and stall were extremely successful - the Campsie members had a wonderful reception from the Ayrshire comrades and the Irvine people. A day to remember! 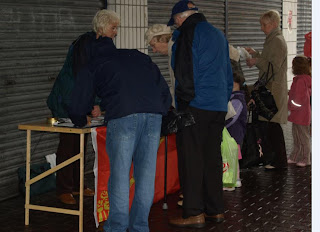 It was difficult forPhotographer, Rikki Reid to get a shot of the table as it was constantly busy from the moment it was set up, to the time we decided to call it a day! As Denise says in the press release on the SSP main site, “Irvine has definitely rejected the policies of the New Labour project.”
Posted by Campsie Scottish Socialist Party at 8/07/2008 11:04:00 pm No comments:

Jim Bollan will be leading a discussion on "How we take the councils" and sharing his experience in West Dunbartonshire Council as well as explaining the amazing community owned Cordale Housing Association in Kirkintilloch Leisure Centre this Saturday at 10.30am-12.30pm. All welcome. Please pass on to SSP members who would be interested in joining this discussion. Reflections of a Glasgow candidate

FRANCES CURRAN on the by-election campaign where Labour lost the plot.

DURING the course of the Glasgow East by-election campaign, I kept coming across people who had voted Labour all their lives saying: "Never again."

Labour's loss in Glasgow East appears to confirm something that my Scottish Socialist Party colleague John McAllion has written of recently. Labour in Scotland is in a state of terminal decline.

The party that had represented Glasgow East unbroken since 1922 and held a vice-like grip on politics in central Scotland for generations has found itself humiliated and in headlong retreat since its defeat at the hands of the SNP in the 2007 Scottish parliamentary election.

I started my political life in the Labour Party Young Socialists in Glasgow's East End in the late 1970s. It is still startling to see the extent of the decay in Labour's support among the working class and the total domination of US-style spin and froth, even though we have had 10 years of new Labour to get used to it.

Voters in Glasgow East clearly signalled that they had had enough of a government which has done nothing to protect working people in the gathering financial crisis and is seen as remote and no longer on their side.

Everywhere I went there was revulsion with expenses fiddles, John Lewis lists and Labour politicians living high on the hog as former supporters struggle to pay the bills.

In contrast, SNP candidate John Mason clearly benefited from the fact that Alex Salmond's Scottish government has adopted policies such as abolition of prescription charges and free school meals, both policies that were pioneered by the SSP, alongside a renewed programme of council housing, and the abolition of bridge tolls.

So, despite his conservative views on issues such as abortion, Mason came across as a supporter of an Edinburgh government treading something like an old Labour path and attracting traditional Labour voters as a result.

Importantly, the result also shows that attempts to create fear around independence no longer have the impact that they once had, even though the issue was highlighted constantly and negatively by the Labour campaign.

The clear lesson here is that working-class voters want a government which is seen to be on their side against the fat cats and not one which simply pours them more cream while lapping up some itself.

In Scotland, the twin blows of economic crisis and the popular SNP administration look like turning a difficult new Labour crisis into a terminal one, with the prospects of a public fight for the leadership of their crisis-ridden Holyrood group looming.

Significantly, the result also shows that there is a bedrock of support for socialist politics, with the SSP gaining 555 votes, Solidarity 512 and the Greens trailing on 232.

But it also underlines the criminal folly of Solidarity's breakaway from the SSP and the mistake of its assertion that there is room for two socialist parties in Scotland.

Star readers need to understand that the SSP was successful as a result of being a unified socialist party and that the wipeout of socialists from the Scottish Parliament is a direct result of the split led by Tommy Sheridan.

The change from last year, when Solidarity outpolled the SSP by five to one in Glasgow East, to a position where it was behind the SSP last week indicates both the folly of the split and its declining influence.

As the crisis engulfing new Labour intensifies, the SSP is committed to playing its part in winning support in Scotland for a democratic socialist republic and for a serious left-wing programme across the UK.

We are already involved in organising a grass-roots conference between our activists and ecosocialists from both Green and no party traditions later this year.

The SSP is also officially supporting the September Convention of the Left in Manchester and a delegation from the party will be participating fully in the event.

It seems clear that the death knell of new Labour is sounding. This makes the task of left in fashioning a democratic socialist alternative a task of the greatest urgency.

Councillor Jim Bollan will be leading a discussion on his work in West Dunbartonshire Council.