The Scottish Socialist Party in East Dunbartonshire welcomes the protests against school closures and the extremely flawed consultation process in East Dunbartonshire and offers it’s help in this important grassroots reaction to the policies of Westminster that are impacting negatively on our local community.
The reduced budget sent north by Danny Alexander, Jo Swinson, George Osborne, Clegg and Cameron et al, is now effecting the future of our children (in the face of increased and much higher amount of revenue sent south).  Policy in Scotland, of not just the Scottish Socialist Party, but the SNP and Greens, has been to reduce class sizes and increase the ratio of adults to children.  The reduction of budgets has meant that the Westminster and local councils are at times quoting spurious research that goes against all that the monied class believe, ie, that small classes make no difference.
Cameron and his pals, pay large amounts of their accrued millions for the education of their children in order to ensure their children’s time spent with the teacher is maximised.
In private schools, class sizes are as low as 8.
It doesn’t take a mathematician to work out that the amount of time a teacher can spend on children’s personal education is vastly different from a child thrown into new of the huge superschools. State schooling is being reduced to “controlling behaviour” with overcrowding the norm as soon as the new “minimum standard” superschool is opened.  It is a disgrace that the Liberal Democrats and Tories are telling working class/middle class families that their child deserves to be almost chained to a desk in the cramped conditions 32 in a class with one adult overseeing, creates.  Huge, impersonalised schools go against the spirit of the New Curriculum for Excellence – a curriculum designed to help give a child a love of learning, a freedom to explore and child centred/led education.
The present East Dunbartonshire Council, a coalition between vicious, uncaring Tories and New Labourites who have damned us to the thievery of PFI/PPP (which is ensuring our council is paying a huge chunk of your hard earned taxes, on an annual increasing basis, to private profiteers) have been determined to make our parents and children pay ever since the Save Our Schools campaign – a cross constituency united campaign – won their case within a week just over two years ago.  We knew this would come back sometime mid-term in the Council’s life.
The Scottish Socialist Party realise that the demographics of communities change, but at the same time, if that demographic has changed in such a way that ensures class sizes are not more than twenty, then the local schools and children benefitting from this change should be seen as the model for the future.  Not herding children across the constituency to be lost in schools of thousands of their peers.  The Tories, New Labour, and the Liberal Democrats seem to think we should always drive to the bottom, and this has become clear on the English NHS, pensions, welfare and painfully in England, education.
Twenty in a class is plenty – more than plenty.
Twenty in a class ensures an average of 75 minutes a week of a teacher’s time is spent with your child.  The present 32 in a class means 46 minutes on average (compare this with the private school average of 187 minutes a week – over three hours – are we really “all in this together?”).
Large class sizes are detrimental to our children – and school closures rather than reinvestment in some of the smaller country and urban community schools, ensure our children struggle and have an unhappy school life isolated from their community. Current practise in replacing smaller schools with super-schools impair implementation of the New Curriculum for Excellence, so disadvantaging our children. The marketisation of Education has disadvantaged many low and middle income families.
Research on lower Primary Years (P1-3) gives us much more to think of (while being told that because of our tax money being frittered on Bankers debts we must tighten our belts):http://www.classsizeresearch.org.uk/results1.html (Department of Psychology and Human Development at the Institute of Education, University of London, UK.)
We were heartened to see the schools campaigners on the streets this weekend, the same weekend the YES Scotland campaign were campaigning for a fairer Scotland.  In an independent fairer Scotland, our children’s future would be placed above the profits of the PPP/PFI companies and budgets would be decided by people closer to where they impact.
We urge all parents and those concerned with education to unite and fight the Tory/New Labour coalition in East Dunbartonshire Council as it places paying the increasing PPP/PFI bill above the future of our children.  Budgets should ensure maximised child/teacher time and space for children to learn.
To sum up - considerations for East Dunbartonshire Council and it’s current Education policy:
Of course, the Scottish Socialist Party feel that the only way to bring power to communities in Scotland over their budgets that impact our schools, hospitals, pensions and welfare, is to vote YES in 2014.
Posted by Campsie Scottish Socialist Party at 1/27/2013 04:21:00 pm No comments:

Please come along and help or come along for a chat with some of the volunteers! 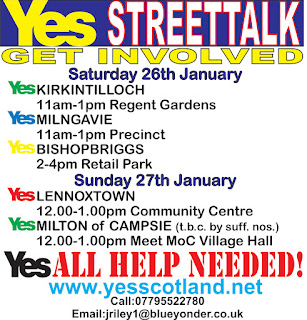 Cameron has just created his NEXT coalition partners for 2015, UKIP.

He has just shafted the Libdems bigtime. Kicking a referendum into the medium grass (after 2015) means the Tories will get 5 more years and UKIP, winning some seats, will go into coalition creating the most right wing Government the UK has ever known.

The unquestioning faithfulness of the Liberal Democrats to the Tory programme, and the realisation that they, in the words of Martin Luther King, prefer a "negative peace which is the absence of tension to a positive peace which is the presence of justice," has destroyed Clegg and Swinson's party.  An increasingly hammered, impoverished working class will see the yellow albatross's off.  A middle class who this week will see their wages reduced on average by £30 a month after capitulation by the LD's on pensions are leaving them in droves.

Cameron does not want to leave the EU, nor does he really care about re-negotiation.  He does care about power in order to impose a dystopian future on the "UK", and this announcement of a referendum will more or less ensure a weaker opposition and a stronger right-wing coalition.

I don't feel sorry for quisling Libdems, but I did warn Jo Swinson she was a patsy (this article has my twitter conversation with her after the Coalition agreement was signed - HERE).

The patsies have just overseen the death of their party & the re-election of the greedy, lying, vicious Tories.

Long may the Libdems be in the wilderness for damning England to Tories part two.

The democratic deficit. Remember, our MP was one of those who voted "yes." 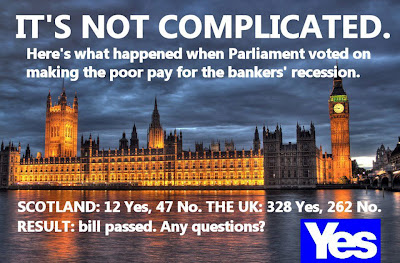 Please use these as you see fit. 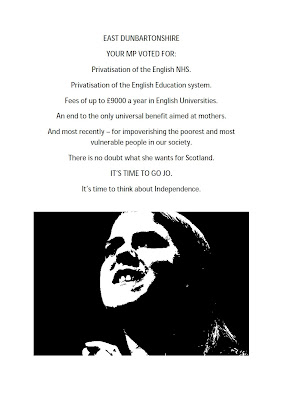 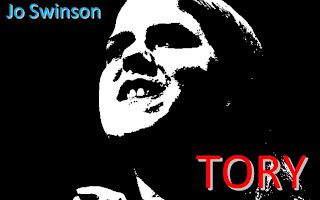