Build for a demo against cuts on October 1st!

There is a better way... 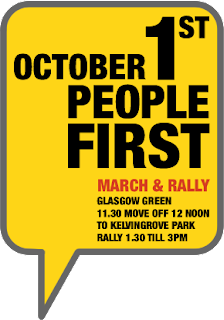 Email ThisBlogThis!Share to TwitterShare to FacebookShare to Pinterest
Labels: Glasgow, october 1st, stuc, there is a better way

How we treat our children...

UNICEF report - An Overview of Child Well-being in Rich Countries -
UK children are WAY down the list in all of the indicators.  full report HERE
Click on Table below for summary... 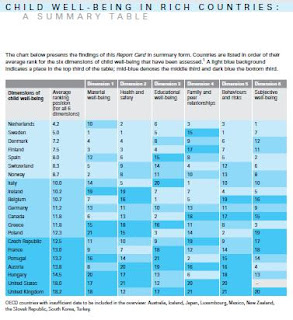 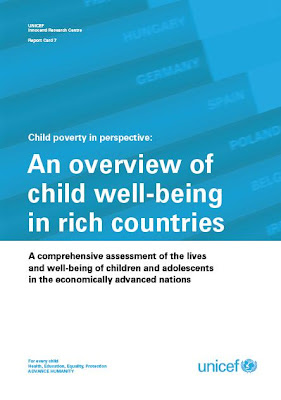 A teacher's response to McCormac's review of Scottish Education... 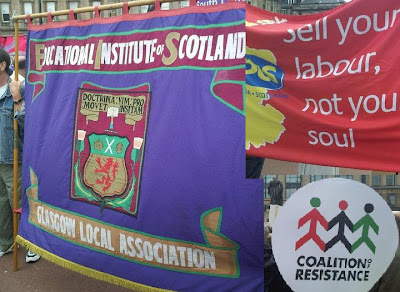 Prior to the findings of the McCormac review I feared the worst. The reality is somewhat different; the 35 hour week survives (in theory) and the need for preparation time is acknowledged. However, to accept McCormac on a superficial level, and regard it as an innocuous document, would be naïve. The cynic in me says that it is both a monstrous perversion of the English language and a pernicious attack upon our conditions.

My fears stem from the sheer number of contradictions contained in the report. The document claims to advance teacher professionalism. Introducing unqualified staff does not advance professionalism; it is the very opposite. Introducing a convoluted system of calculating class contact time will not be “flexible”- it will be exploitative. On the one hand it claims to want an end to hour counting; on the other, having to calculate their contact time on an annual basis will leave teachers with the choice of counting or being exploited. You can only fear the worse when they claim that they want teachers to be more “mobile”. What does that mean? Greater employment instability? More short-term contracts? In an attempt to simultaneously attack conditions yet be inoffensive to teachers, McCormac has ended up as a report that in many instances simply doesn’t make sense.

There is a saying that ‘if it ain’t broke don’t fix it’. Industrial relations in teaching have enjoyed a harmonious period during the last ten years. The report even acknowledges this. It states that Scotland has “a well-qualified and committed teaching profession that provides a positive and stimulating environment for young people's learning”. Nonetheless, the authors have launched a sustained attack on teachers, their conditions and, the corollary of attacking either of these two, the welfare of young people.

The McCormac Review’s official title is Advancing Professionalism in Teaching. The irony is that by scrapping the Chartered Teacher Scheme, and introducing non-qualified staff, the report is in fact eroding professionalism in teaching. From the outset the report exudes an arrogant assumption that only management control – as opposed to teacher autonomy – can offer greater professionalism. The proposed end of the right for staff to work off-site is indicative of this; the implication being that we are not professional enough to work outwith the guise of management.

54% of responses to the McCormac review felt that Annex E should not be revised. By this, the report acknowledges that a majority of respondents do not feel that teachers should be carrying out any of the duties in Annex E. So, in what must considered a wholly disproportionate act, McCormac has recommended axing Annex E altogether.

There are a handful of positives that can be taken. The introduction of a national system for annual review will be a relief to those of us who have had to negotiate the dissimilar ways in which respective local authorities handle these matters. CPD requirements will be linked to this system. However, it is not clear what the report’s proposed changes to CPD will look like in practice.

Probationers will remain on the same contact time but it is calculated over a four week period. This potentially opens the way for probationers being taken for cover. This forces the probationer to hour count, keep a log of when they are taken for cover, so as to prevent management from exploiting them. Once again we face hour counting.

Unqualified staff are to be allowed to work with classes on their own given the assent of the Headteacher. The GTCS are to approve which unqualified individuals are allowed to do this, but by using the money that we pay them each year. In other words, we are paying for a move that could potentially lead to our own job losses. In another of the report’s wonderful contradictions, it is interesting to note that unqualified staff are to be allowed to look after children unsupervised, but experienced classroom teachers will not even be allowed off-site to complete their marking!

Advancing Professionalism in Teaching, is a misnamed, misguided and for the most part unnecessary document. It has been composed to ensure that Scotland’s local authorities fall into line with David Cameron’s sustained assault upon the public sector. The changes to working hours will allow authorities to hire fewer staff. As with all decisions in the public sector nowadays, its recommendations are driven by cost; the welfare of young people is afforded only lip service. However, in a rather perverse way, we are lucky. While London governs in a dictatorial fashion, in Scotland the authorities have to proceed with caution. McCormac is not as detrimental as it could have been, but it is far from an encouraging development for the teaching profession in Scotland.
Posted by Campsie Scottish Socialist Party at 9/14/2011 10:26:00 pm No comments:

Liberating the NHS: source and destination of the Lansley reform


INTRO (the entire body of this document has been placed HERE)


A narrative for this reform, far more transparent than the double-speak of the White Paper, can indeed be located. It is described in the following pages. It maps a move away from the tax-funded NHS based on the principles of contribution according to ability to pay, and use according to medical need. It takes the NHS towards a US style arrangement of individual health insurance with access to care based on payment of health insurers at a level based on the insuree’s state of health. In other words it removes the pooling of risk which underlies the post-war social solidarity compact, involving subsidy of health care for poorer and less healthy citizens by richer and healthier compatriots. A plan for the end-state system to be jointly funded by the state and the individual solves the perplexing riddle of how the new systemcould generate £20 billion of savings, given that it involves more providers, fragmented procurement, more complex administration, the marketing costs involved in market competition, and multiple layers of profit extraction from the NHS budget,. Cost reductions will be achieved through de-skilling and poorer employment terms for medical professionals as the NHS hospitals which employ them are shifted into the private sector. 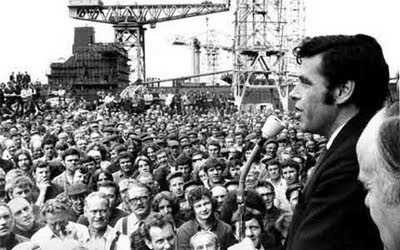 ...Starting 2.30/3pm... coals will be lit - bring your own food and drink.  Ring and Ride Bus will leave Milngavie Station at 3pm and then leave Mugdock again at 7.30pm.

Meet at the POND BBQ area (click on map below) 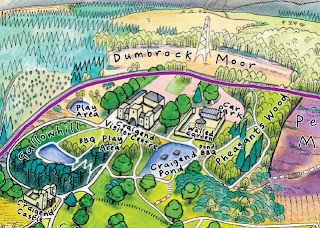