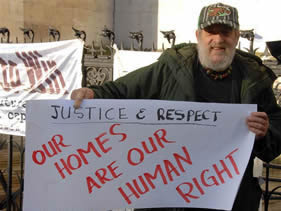 The Scottish Socialist Party unconditionally condemns the eviction of the residents at Dale Farm Gypsy Travellers Site in Essex. We view this action as a consequence of collusion between the coalition government, courts, police and local authority, cheered on by racist elements in society. We do not accept that this was about 'planning' issues or the 'rule of law'. We stand four square in support of Gypsy Travellers in defence of their human right to pursue their culture and way of life. We note that many local authorities now take advantage of the removal of legal obligation to provide sites, by adopting a policy of making their localities no-go areas for Travellers who wish to pursue a traditional lifestyle. Despite gains in legal protection in Scotland and elsewhere in the UK in recent years, we note that racist attitudes prevail and are now proven to be institutional. We call upon progressive elements in Scottish society to join with us in condemnation of the Dale Farm eviction, and pledge to ensure that similar actions do not blight the creation of a tolerant society in Scotland. We especially condemn the violent reaction of the police against residents and their supporters, and their use of tazer weapons; these are said to have been designed for the protection of police officers facing individual aggression, and not to control crowds. We are concerned that this sets a dangerous and potentially lethal precedent for the control of future demonstrations of citizens rightly angry with a right wing government whose policies favour only the rich and privileged. 19th October 2011 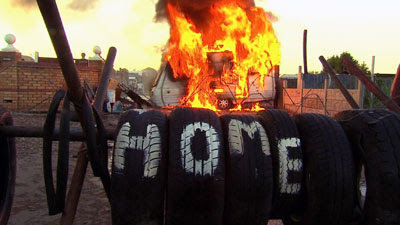 SSP Campsie would like to pass on condolences to the family and friends of Sammy Gilmore, a true hero of the Upper Clyde Shipyard work-in, 40 years ago, and a hero for working people defending their right to work across the world.


Shop Stewards who were part of the UCS Work-In in the shipyards of Glasgow and Clydebank organised a concert to mark the 40th anniversary of the famous industrial dispute, in the Mitchell Theatre, Glasgow. The Gala Concert on Sat 1 October in the Mitchell Theatre featured Tony Benn as Guest of Honour. He was the Labour Minister who created the UCS consortium in 1968 and a prominent supporter of the Work-In when in opposition. This is the speech he delivered that night.
Posted by Neil at 10/02/2011 06:03:00 pm 2 comments:


Podcast Powered By Podbean
This is the famous "rat-race" speech that Jimmy Reid gave at his installation as Rector of Glasgow University.  This recording was made on October 1st in the Mitchell Theatre in Glasgow, when people came together to celebrate the 40th anniversary of the Upper Clyde Shipyard work-in, led by Reid and others.  It was read by the wonderful Glasgow based actor, Elaine C Smith.  The New York Times printed the speech in full and described it as "the greatest speech since President Lincoln's Gettysburg Address". A PDF of the speech can be found HERE 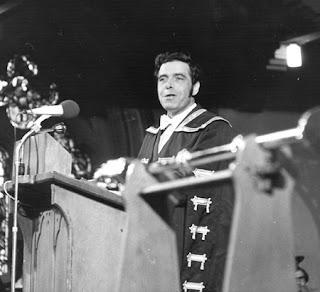 This is reproduced in good faith - if anyone featured within the audio would like it censored in some way, please contact plottracer@googlemail.com.  By reproducing this audio, I have no rights to copyright and ownership. I have no intention of breaching copyright law by reproducing this audio file, which is purely for entertainment purposes only.
Posted by Campsie Scottish Socialist Party at 10/02/2011 03:54:00 pm No comments:

Thousands demonstrate against cuts in Glasgow despite the downpour!

Thousands of anti-cuts and anti-ConDem Government protesters took to the streets of Glasgow today, despite the massive flooding that hit the city. 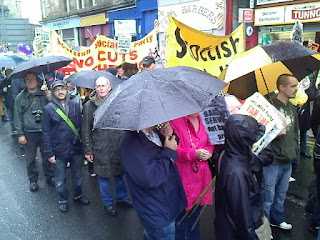 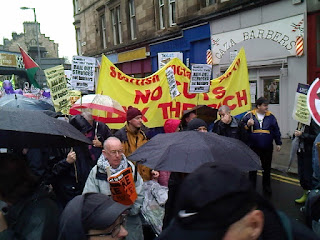 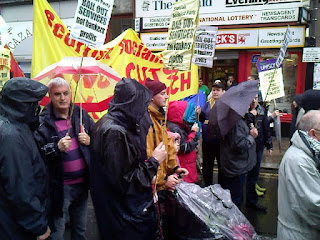 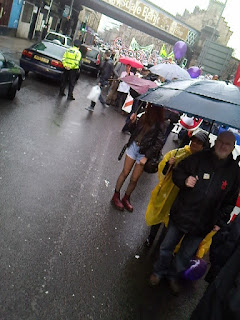 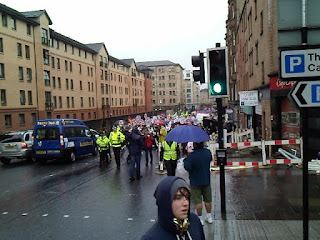 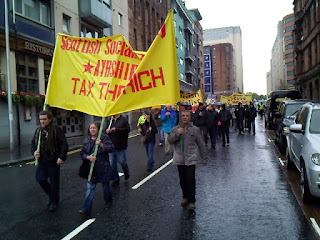 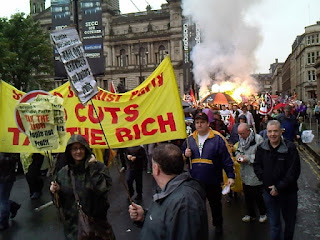 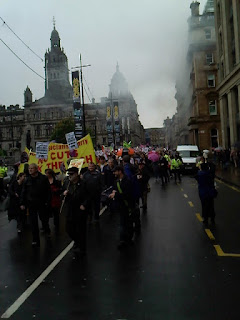 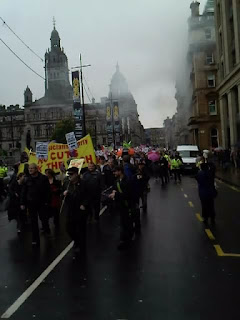 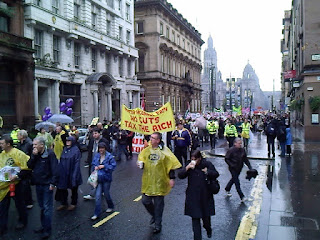 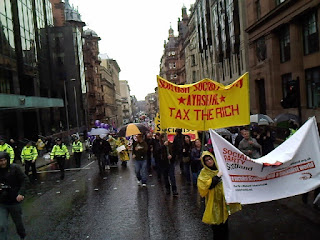 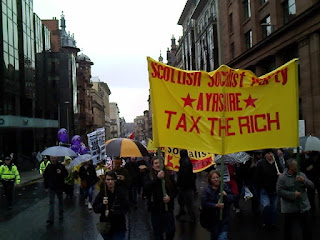