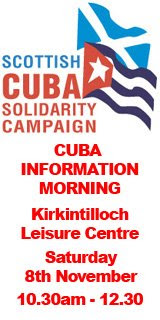 THE CAMPSIE BRANCH SSP have invited Cuba Solidarity to Kirkintilloch to facilitate a session on the Miami 5, and to talk about Cuba.

Despite the 40 year old illegal blockade and ongoing aggression the lives of all Cubans have been transformed since the revolution. Outstanding achievements in education, healthcare and other social improvements have been made. Education is free to the highest level. Medical care is also free.

SCSC call for the immediate release of the Miami Five, five Cuban patriots imprisoned in the US since 2001. Imprisoned on trumped up conspiracy charges the five were trying to prevent acts of terrorism being carried out against Cuba. We support the international campaign to free the five.

Persepolis –A discussion on Identity Politics.

Campsie branch recently showed the film "Persepolis" in Kirkintilloch Leisure Centre (we meet there on the Second Saturday morning of the month at 10.30am.) 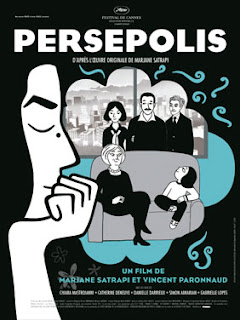 Persepolis is an angry, yet simultaneously joyous and inspirational, animated film based on Majane Sartapi’s autobiographical graphic novel of the same name.

I highly recommend the film! It is funny, quirky and great entertainment on many levels - but rather than give a review I am going to discuss it in terms of how I think it can help Socialists understand the importance of Identity politics.

The story follows a young girl as she comes of age against the backdrop of the Iranian Revolution.

Socialists can certainly identify with a lot of Marji’s rebelliousness - especially at the start when we see the mass protests against the Shah. Even after the Islamic fundamentalist’s take over and her Communist uncle is jailed - her spirit is not crushed. Marji refuses to stay out of trouble whether it’s secretly buying Western heavy metal music, wearing unorthodox clothing or openly rebutting a teacher’s lies about the abuses of the government.

As the film goes on we start to see how women are doubly oppressed by the regime.
There are many obvious examples in the film. One recurring theme however, whether in Islamic fundamentalist Iran or in West, is the very real threat of sexual violence, rape as a weapon of war and sexual slurs as common parlance.

In one scene Marji’s mum has a mild altercation with a guard of the revolution in a supermarket car park. He shouts at her contemptuously “Women like you I bang like whores and throw in the trash!”

In another scene she warns her young daughter not to speak out against the regime in class. It is illegal to kill a virgin she tells her daughter so they will ‘have to’ rape her first!

Fearing her arrest for her outspokenness Marji’s parents send her to a school in Vienna, Austria.

Sexual slurs are echoed over and over again when she is in the West. ‘Slut’, ‘Whore’ and ‘prostitute’ are commonly, and casually, used.

Marji feels intolerably isolated in a foreign land surrounded by people who take their freedom and peace for granted while making her feel ashamed of being Iranian.

Marji becomes enraged when her ‘politically aware’ friends dismiss politics as meaningless because it is not an abstract academic enterprise for her. In her experience these issues are life and death. Her country is at war!

Highlighting how some people face multiple oppressions - whilst others are entirely unaware of their own privilege.

As socialists we need to be careful not to dismiss people’s experiences in this way and seek to understand the converging oppressions that people face. Unless we believe that class alone shapes someone’s identity.

I am particularly interested in a feminist analysis of the film because as a woman – I can’t but know that Patriarchy exists – it is part of my day to day experience. Therefore Marji’s anger struck a chord with me when her experience is dismissed by those in a privileged position.

In this regard I believe that socialists have to be vigilant against lazily accepting sexist rhetoric against women politicians - Sarah Palin being the most recent example - just because we disagree with their politics.

In my view Socialists have to strive to understand identity politics if we are to be taken seriously in wider society about ending oppression. Rather than mimicking those oppressive attitudes ourselves.

We need to recognise that if we were to have a socialist revolution tomorrow – without an analysis of identity politics – we would still have sexism, racism, homophobia, islamophobia, western elitism and many other prejudices.

That is not the world that I am fighting for.

Marji’s granny advises her as she goes into exile ‘Be true to yourself and never forget who you are!’ Wise words.

Ron Mackay has been a socialist all of his life. A retired teacher, he has been arrested for his principles of non-violence and anti-nuclear weapons. He can be found playing sax at most anti-war and pro-socialist demonstrations. 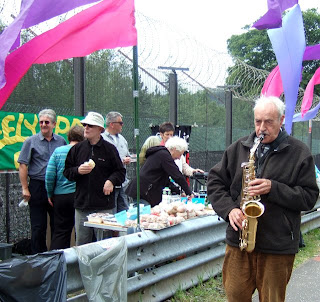 The old socialists used to say " you can't have guns and butter". You can't have warfare and welfare. The 3 main parties at Westminster are infact a variation of one - the party of warfare. Every aspect of welfare, health, education,the social services and the arts face cuts while expenditure on wars and preparation for wars is soaring. Trident at present costs millions and renewed trident will cost even more. Developments at Aldermaston and elsewhere, where our nuclear,chemical and biological research is carried out, adds to the emormous drain on our resources.
In the Glenrothes election the (3 in 1) war party will struggle against the S.N.P. The media,essentially exclusively capitalist, will hype up the sham battle between the different strands of the war party. The S.N.P. , tho' more progressive than the main war party, only serves to distract from the socialist policies which give the only real answer to the present crisis.

Lincoln got it wrong - you can fool an awful lot of people for a very long time but we must struggle against the forces dedicated to warfare. The alternative is to sleepwalk towards W.W.3. Socialism is trhe only hope for humanity. Our goal is not easy but essential. 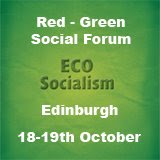 Jim Bollan, leading a discussion on "How we take the councils" and sharing his experience in West Dunbartonshire Council as well as explaining the amazing community owned Cordale Housing Association. The video is just over 20 minutes long.

This Greed Was Beyond Irresponsible

Bill Newman spent most of his working life in banking, latterly as head of economics and then as Assistant General Manager of a City of London bank. For some 15 years he was also editor of and wrote for a journal on international monetary economics.

He has an interest in African matters, having been responsible for economic and political reporting on sub-Saharan Africa for Westminster Bank and writing for some years for the Europa Yearbook on Somalia and Ethiopia.

He was also on the Executive Committee and the Management Committee of the Banking, Insurance and Finance Union (BIFU) and a delegate to the TUC.

No. The headline above was not from the Morning Star, but was from that house newspaper for the rich and powerful, the Financial Times of 18 September. And how about these headlines from the Herald: Capitalism has proven Karl Marx right again and Bailing out banks is socialism for the rich. All this is true and reflects the intrinsic truth about capitalism, but you won't hear any MPs or MSPs accepting this or recognising that this profound crisis merely reflects the inevitable effect of uncontrolled capitalism, nor will they acknowledge that socialism is the answer to these periodic catastrophes. The press and politicians fulminate about the greed of financial traders and bankers and fail to recognise that it is this greed which is the rationale for capitalism. Without greed and exploitation, the whole structure of capitalism would collapse.

It may seem strange that apparently intelligent men could bring mighty financial edifices to their knees, but if you are earning stratospheric sums trading bits of paper to other overpaid traders, why worry that these pieces of paper might represent worthless or, at the very least, suspect commodities. Did no-one not bother to consider that sub-prime mortgages, for example, were, by their very nature highly risky loans and that by the time they had been packaged up with other dubious products, it was virtually impossible, once they had been traded time and time again on the financial merry-go-round, to tell what underlying value they represented. Some years ago when I worked in banking, I queried with the Bank's chief trader what the quantifiable risks in the derivatives he traded were. In reply he pointed out that the Bank made substantial profits from such trade and that all banks of any consequence were also engaged in this paper chase. In consequence, I raised my fears with the Bank's Board only to receive the same answer. In essence, the boom in these dubious trades was a classic case of pyramid selling, not unlike the South Sea Bubble, and only the greed of bankers blinded them to the escalating risks of these increasingly complex markets.

But do the travails of overpaid bankers affect the average citizen? Unfortunately they do and the coming months will show a massive decline in all economic activity as banks try to rebuild their balance sheets, refuse to extend credit and shed staff. It is impossible to believe, for example, the reassuring noises that Santander makes on employment in their subsidiaries in Britain. If Abbey, Alliance and Leicester and Bradford and Bingley are owned by the same company, is it credible to believe that these banks and their staff will not suffer from consolidation? Without access to credit, what is left of our manufacturing industry will shrink at an escalating rate, unemployment will soar and house price collapse will leave many with unsustainable negative equity.

So what is the response of our politicians? Inevitably, the bail-outs envisaged are bail-outs for the very people who got us into this fine mess, a fact that the American public has been quick to realise. Nor will the enormous sums involved remedy the sickness in the world economy. It is not surprising that our leading politicians seem to have no knowledge of Karl Marx who , as Ian Bell in the Herald pointed out, defined with precision the inevitable economic crises at the heart of capitalism. It is rather more surprising that they seem to have forgotten, if they ever knew, the lessons taught by Lord Keynes, so besotted have they become by the simplistic notions of the free market as propagated by American economists of the so-called Chicago School. It should surprise no-one, not even politicians, that the only UK bank to be trusted by the public at the moment is the only nationalised bank, Northern Rock; so successful that the Bank's deposit services have been curtailed! The lesson, which our politicians will not learn, is that publicly owned banks are secure and privately-owned banks are not. At the very least, it would help if the Government greatly expanded public expenditure, but the very reverse seems to be happening.

The answer to the pending economic crash, is socialism, and now should be an ideal opportunity to get this message across. Given the control of the media and the absence of sympathetic politicians, this will not be easy, but the public will be looking for real solutions and will not be fooled for ever by sticking plaster measures of Western governments. The Scottish Socialist Party offers a principled and practical solution to our economic ills and it is crucial that we get our message across. 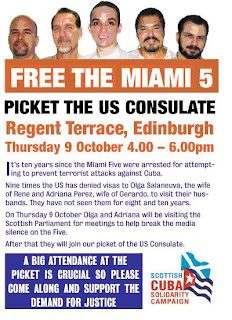