Swinson- increasingly divorced from realities of living in East Dunbartonshire

I have been finding our local LibDem/ConDem/Tory MP, Jo Swinson's "e-consultations" and online presence are becoming less and less about her constituency, and more and more about her want to make an impact with the "federal party" she is part of, and building a CV for the inevitable crash of the Lib Dems.


Lately, Swinson has replied to me via email to pronounce her support of Nuclear Weapons and "an alternative" to Trident being the imperative -


"A non-nuclear defence is not currently a viable option and the EDM does not recognise that we continue to live in an uncertain, unpredictable world where proliferation of nuclear weapons is still a priority for some countries. We also cannot assume that current nuclear states will remain stable and pose no threat to our country and its interests. The risk may be low, but so long as a risk exists, we cannot leave ourselves vulnerable and so some minimal deterrent is needed."


I would like to know what this threat she is hinting at is - and why reacting to this threat with a nuclear deterrent is a necessary and positive response.  Would we really attack another country - killing many innocent families, children and workers - if some deranged terrorist or dictator launched an attack on us?


If you would like a copy of her response to my request for her to sign EDM 1924 regarding the Trident Review, please email me at eastdunbartonshiressp@hotmail.co.uk


"Do you agree that the government should invest in high speed rail between London and the north of England?"

I felt this question was not only far removed from her "localism" campaign to be elected in the past two General Elections, but also shows her as a career politician, making sure of her place in the decimated LibDem Party after the next General Election (which, the way this coalition are going, could be sooner rather than later).  Positioning herself as Vince Cables PPS will, perhaps after the election give her some sort of political position or at least a great entry in her CV.
Remember - between her and her MP husband, their family income is over £120,000 a year - not bad for two career politicians who have never had to struggle.  The least she could do is fight for working families and poorly paid people in her own constituency.  East Dunbartonshire is a place where we are reliant on public sector jobs - teachers, nurses, doctors and other "civil servants" commute daily to Glasgow and other cities and large towns for a diminishing return thanks to the VAT increases, increase in transport costs, increase in food prices and increases in fuel prices to name a few - alongside frozen wages.  The median wage is £21,000 - far removed from her wage of over £64,700 plus allowances, including travel.  How many East Dunbartonshire working people get transport allowances into Glasgow or Edinburgh or elsewhere?  How many East Dunbartonshire people get their subscription the the Bearsden Milngavie Herald as a work expense?  Or their mobile phone bill paid?  As a teacher, I am in contact with my Head Teacher and other colleagues about work quite a lot - perhaps Jo should fight for ALL workers to have their mobile phone, travel to work and subscription to a local paper paid for through company expenses?
Swinson is increasingly being seen as the well off young person who has never had to work or struggle for her income she is.  And increasingly as someone divorced from the present day hard realities of living in East Dunbartonshire.
This is my reply to her current anglo-centric consultation:
A fully integrated, updated public transport system is vital to our country - and indeed to East Dunbartonshire, which this question, and more and more of your "consultations" seem to forget about.

As the economy slumps and as more and more of your constituents have less and less money to help the economy grow due to the Lib Dem policy of support for the Tory plans to make the poor and working pay for the crisis of capital created by millionaires and billionaires, a free public transport system for the huge amount of commuters from East Dunbartonshire would be a policy that would not only help poor and working families financially; it would be a boost to the local economy as people would be left with more of a disposable income.  It would also help clear our streets from  the curse of the car (and ensure the predicted one hour travel time from Milngavie to Canniesburn DOES NOT happen post-Kilmardinny development).
Our policy of Free Public Transport - a policy that has been successful in other parts of the world in boosting economies and in creating a cleaner environment, can be found here along with links to articles in the Herald praising this "audacious" plan.
http://www.scottishsocialistparty.org/transport/index.html
Neil Scott
Organiser, Campsie Socialists.

To the Tory/Liberal Democrat coalition...

...The Diary of a "Benefits Scrounger."

Article by Campsie SSP member Neil Scott on James Doleman and Philip Stott's strange view on the events leading up to Tommy Sheridan's incarceration HERE
Posted by Neil at 7/05/2011 01:13:00 pm No comments:

"The death threats and vile hate messages from right wing Zionists will have no effect on the Council's boycott of Israeli goods.  These threats expose the paucity of the arguments these Zionists try to put forward to justify the slaughter of innocent Palestinians by the IDF.  The boycott was unanimously approved by WDC and remains in place.  The Council Leader only last week confirmed and re-enforced our policy which was taken on humanitarian grounds after the IDF killed 1,300 innocent Palestinians in Gaza in 2008/2009.  The Scottish Socialist Party stands 100% behind the Palestinians. Unless we speak out...nothing will change."
Posted by Neil at 7/01/2011 02:16:00 pm No comments:

Remember - Swinson, the Tory collaborator, will get a bigger pension than you!

...and after only being an MP for 9 years!  Click on image below to see just HOW much bigger! 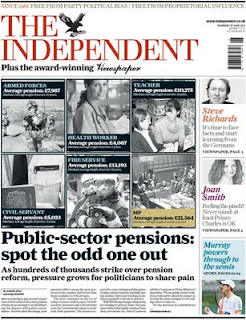