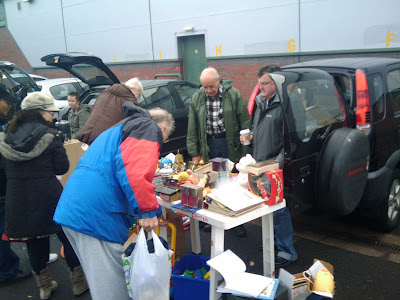 Ron and Alan giving it the "Barras patter"
Campsie branch Scottish Socialist Party braved the weather today and went along to the car-boot sale in Milngavie. We sold lots of bric-a-brac and books - and despite the reduced crowds because of the terrible weather, we managed to raise nearly £70 for Kevin McVey's campaign in Glasgow North East. 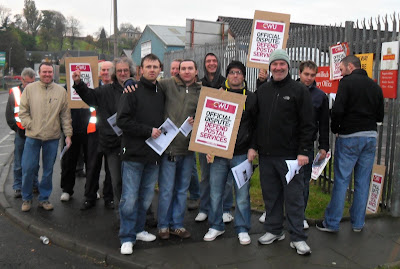 The Campsie Branch SSP have made a statement in support of the local and national postmen who are fighting for our Post Service, their jobs and their pay and conditions.

"We note the Bankers, who are now public service workers, and whose mishandling of our money through their greed cost the tax payer - this country - billions, are getting huge bonuses again, whilst the posties who helped Royal Mail make a £400 million profit last year are being asked to suffer job losses, loss of pension rights and are forced to work longer and longer shifts for less money.

The call from the capitalist political parties like new Labour and the Conservatives that "we are all in this together," when this is patently untrue, grates all the more when you know that those telling us we must live in "austerity" to get through this economic crisis are very rich men."

VICTORY TO THE WORKERS. SAVE OUR SERVICES!

Cuts in Services, Jobs, Wages and Pensions to Pay for Their Crisis by Raphie de Santos

Cuts in Services, Jobs, Wages and Pensions to Pay for Their Crisis

Cuts: that’s what all the major parties - Labour, SNP, Conservatives and Liberal Democrats - are arguing about. But not if there is an alternative to the cuts but who would be the best at making the cuts. But let’s be clear we are bailing them out of the complete mismanagement of their economic and financial systems.

Bring on the Clowns

Governments led by Thatcher, Blair, Brown, McConnell and Salmond have supported the changes to the running of the financial and economic system that have led to the greatest crisis since the 1930s. They have overseen the deregulation of financial markets and institutions and the liberal use of interest rates that created a huge speculative bubble in every type of debt and a mountain of 700 trillion US dollars of unregulated derivatives. They bailed these systems out with hundreds of billions of pounds of borrowed money which they are asking us to pay back through cuts.

Having all cheered from the sidelines patting each other on the back for their wonderful creation they now blame everyone but themselves for the mess and are asking us to pick up the bill for their reckless folly.

The shortfall in money has come from a bailout of the crisis ridden financial system and a deep UK recession caused by the resultant collapse of consumer credit. So far the government has spent about £150 billion (bn) bailing out the banks and another £150bn on quantitative easing (QE) – where they print money and buy back government and other debt from financial institutions. They are going to spend another £25bn on QE and are prepared to underwrite another £700bn of the banks bad debts. Practically none of the money spent so far has found its way into the real economy - about £2bn has gone into mortgage lending helping to temporarily stop the fall in house prices. Most of the bailout money is being horded by the banks to pay off losses and to have for any future potential losses. So far the money spent amounts to 25% of what we produce (gross domestic product) annually.

At the same time central government revenues are falling because of the recession they have caused. Rising unemployment has a double edged sword of reducing tax revenues and increasing benefits payments for central and local government. In August of this year there was a £17bn deficit in the UK budget from this trend.

One way to pay for the shortfalls is borrow money on the international financial markets through issuing UK government debt – called gilts. Then pay it back over several years with increased revenues from a growing economy. The average that was raised in the five years prior to 2009 by the UK government in this way was £47 bn per year. In 2009 the estimate is £146bn and in 2010 the forecast is £180bn. The problem with this model is two fold: one the economy will not recover (if at all) sufficiently to create extra tax revenue to make these payments; second the UK economy is so fundamentally weak that Bank of England interest rates will have to remain at very low levels which means a weak currency and therefore nobody – domestic or international – will want to buy these UK government bonds.

That is why all the plans put forward to make cuts by the major parties are so vague: nobody knows how much will have to be cut to cover the unknown developing black hole in the UK’s finances. That is why there is a general message of we are all going to have “bear the pain over several years” to sort out their mess.


But if we are correct about the prospects for the UK economy – years of stagnation or decline – then the cuts will be on a massive scale year after year with the dire social consequences that will bring for the majority of the working class.

These cuts will affect central and local spending. Local spending by councils is financed by a block grant from central government making up about 75% of the local budget – the rest comes from council tax. Similarly the Scottish government receives a block payment from central government to finance services such as heath and education. The SNP minority government are in effect administering the cuts from London whether Tory or Labour. They have made matters worse for local councils by freezing council tax and refusing to implement a progressive local or national income tax. Even if such a proposal was defeated by the other parties in Holyrood it would have the effect of galvanising a campaign amongst Scottish voters for a commitment for such future tax changes from the next Holyrood election. It would also have strengthened the argument for independence for Scotland.

But the SNP did not want to rock capitalism’s boat and instead be quite happy to implement the cuts and makes some noises that it is all London’s fault.

There is an alternative to the bank bailouts and cuts.

• take all the banks under full ownership and control turning their toxic loans into social rents and social projects and cancelling their destructive derivative contracts;
• a redistributive tax – a one off greed tax would repair the damage already done to our public services and a permanent progressive tax could generate an extra 33% to the total Scottish budget; and
• scrap the expenditure on nuclear weapons, withdraw from the wars in Afghanistan and Iraq and reduce our armed forces to one for defence not invasion.

This is the alternative the Scottish Socialist Party is fighting for in the Glasgow North-East by election and the forthcoming UK and Scottish elections. It is the rationale alternatives to what the major parties are offering us - that we pay for their crisis. It is the start of the building of a society that operates in the interests of the majority instead of the few.
Posted by Campsie Scottish Socialist Party at 10/11/2009 03:23:00 pm No comments:

Royal Mail workers have voted by a record-breaking majority to take national strike action against the concerted assault on their jobs, pay, workloads, the service they deliver to the public – and the attempts to smash the Communication Workers’ Union as a national union.

This is a mass rejection of the bully-boy rule of Royal Mail bosses – egged on in their reign of terror by the job-cutting, privatising New Labour government, headed up in their crusade against CWU members by Lord Mandelson.

It is a mass mandate for effective, united and immediate strike action, at a time of year when the volume of mail rockets, workloads rise, and the value of our posties is even more recognised by the public.

Royal Mail spin-doctors are trying to whip up public fury at these workers daring to ‘disrupt Christmas’ – the same bosses who have ‘disrupted’ the lives of 60,000 workers (and their families) who have lost their jobs with Royal Mail in the last 5 years.

Willie Marshall, secretary of the Scotland no2 branch of the CWU, told me what he thinks of the vote.

“This is a bigger majority even than the 74 per cent YES vote in 2007, the last time we had a national strike. I wasn’t surprised at the massive turnout, when you look at the level of anger amongst members.

It proves members are ready for the fight. And this is not about pay; it’s about the survival of Royal Mail.

Members want the strike action within 7 days after the national meeting of regional secretaries and divisional reps on 12th October. We want the action as soon as possible, and for at least the first strikes to involve the entire workforce, all out together, to show our unity and solidarity.”

Members of the Scottish Socialist Party inside the CWU played their full part in winning this landslide for unified national strike action. The SSP does not hesitate in giving full-blooded support to CWU members forced to strike against the decimation of jobs, public services, pay, pensions and union rights. We will do all we can to build public support for their strike action, until they win a decent deal that defends jobs, services, conditions and workplace rights.

And we will do what we can to press the leadership of UNITE to call on their members not to be used as organised scabs during strikes.

Royal Mail managers used to be in a union called CMA, which has now merged into UNITE. Top dogs in Royal Mail have prayed in vain for a NO vote, or at least a poor turnout in the strike ballot, but lost no time in organising for managers to be deployed as scabs to sustain the pretence of a postal service just in case CWU members had the audacity to vote YES!

They have regularly jetted managers into local offices on strike, usually taking care to deploy them from far-flung places, to reduce the likelihood of them taking sympathy action with CWU members they already know.

Willie Marshall commented to me, “The excuse they used for doing striking CWU members’ work during local strikes is that nobody informed them! That is nonsense, but they can’t use that excuse this time.”

Leaders of UNITE should instruct their members to do their normal duties, not other people’s jobs, and start a campaign for a strike ballot of their own members in Royal Mail – many of whose jobs are also on an extremely shaky nail.

The national CWU leadership have been handed a massive mandate to forge ahead with national strikes, to keep up the momentum, and they should immediately approach UNITE to organise solidarity with their battle for the survival of Royal Mail as a public service – rather than stand silent as UNITE members are organised by top management as a battalion of scabs.