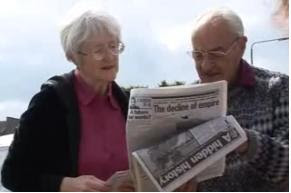 As if the credit crunch and collapse of banking wasn’t enough, climate change is hitting us before we’re ready, and the oil is running out; it really is finite, and we’re using it up as fast as we can. North Sea oil has peaked, along with all other sources.

It’s a mug’s game to be dependent on other countries for our energy (new French nuclear power stations built in Britain, imported Russian gas, German electricity…). We need to create our own energy. Wave power good, wind power problematic. Huge wind farms are erratic and destructive, and they’re usually owned by profit-hungry foreign powers anyway. Putting small windmills in communities makes more sense – not attached to houses, where they can shake the walls to bits, but standing free in strategic places. What CAN be attached to houses – and SHOULD be attached to every south-facing roof in Scotland – are solar panels. Photovoltaic cells would be ideal – creating electricity that could be used by each household, with the surplus fed into the national grid. The technology for these is still a way off, but people should be working on it. Economy of scale should bring the price down. What we could do right now, though, is put solar heating
panels on all our roofs, providing hot water. We need the hot water for heating, and washing dishes and clothes. By hand (remember that?). No more dishwashers, washing machines, and tumble driers. Too profligate, when we have the sun shining for free. 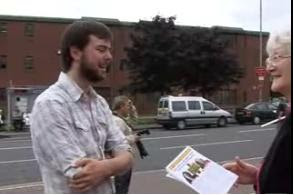 Flying and trucking food from all over the globe is becoming increasingly expensive. Oranges, pineapples and bananas may become unaffordable luxuries again. We need to grow our own food. That means not using our land for biofuels, but using all our land for food. Look your last on vast lawns with stripes made by power-mowers. Dig them up. Grow food.

We need to stick together to overcome the challenges ahead. Sticking together sounds good to me.
Posted by Campsie Scottish Socialist Party at 9/29/2008 10:02:00 pm No comments:

Thomas Swann on his recent move of branches from Campsie... to Nijmegen in Holland.

As the film began, I was reminded of the cold and wet Saturday mornings spent in Kirkintilloch leisure centre with other members of Campsie Branch probably watching a John Pilger documentary or something else as part of our educational activities. The five minutes into the film it stopped and someone had to monkey around with the laptop before it would start up. Again, I was reminded of the regular Campsie Branch film mornings. This was my first real experience of the Dutch Socialist Party. 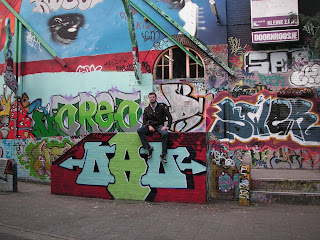 The film was 'Turtles Can Fly', the first film to come out of Iraq since the US/UK invasion. I'd been meaning to get in touch with the local branch of the Socialist Party before I moved to the Netherlands and was encouraged by the warm welcome I received from the local organiser and the other members who were present at the screening. The Socialist Party began as a small left-wing grouping but through a process of community engagement and activism has grown from having one member of parliament in the early 90s to twenty-five today, plus a large number of elected local government officials. It's been held up as the success story of the Left in Europe, and it is largely thanks to its work in communities, on the ground, as it were, that this level of support has been achieved.

Focusing on a few areas, including Nijmegen, where I am now living (you might recognise the name from 'A Bridge to Far'), the party organised projects as ambitious as offering free medical care to members of the community, and now claims a number of 'strongholds' where it has a base of local support. In a number of areas, again including Nijmegen, the Socialist Party participates in the local government along with other Left parties such as the Green-Left.

In this blog, which will appear most likely irregularly on the campsiesocialists.com website, I will attempt to relate my experience of Left-wing politics and activism in the Netherlands, and specifically in Nijmegen, to similar situations in Scotland, as well as comparing the general social, political and economic contexts in which these are taking place. But my research and reporting will not be confined to the Socialist Party, though as an organised political party which stands in national and local elections this will obviously have a large relevance to a member of the SSP as I am. Nijmegen is also one of the centres of Anarchist activism in the Netherlands and has a number of collectively owned bars and cafés which have developed from squated buildings to legitimate enterprises supported through low rent conditions by the Left-wing council of the town.

So, hopefully my next entry in this blog will have something more concrete than a simple introduction and will perhaps provide information which will prove useful to Socialist and Anarchist activists in Scotland, and particularly in the Campsie/East Dunbartonshire area.

Many of the articles in this section were written by Raphie De Santos. In these articles, Raphie predicts the fall of HBOS - and warns about other banks.
Raphie was head of Equity Derivatives Research and Strategy at Goldman Sachs International. He was an advisor on derivatives and financial markets to the Bank of England, London Stock Exchange, London International Financial Futures and Options Exchange and the Italian Ministry of Finance.

Raphie has been a guest lecturer on derivatives and financial markets at Harvard and New York universities and the London School of Economics and has spoken at the annual Nobel Foundation conference in Stockholm.

Click on image below to go to the SSP analysis of the current crisis. 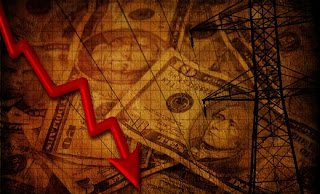 Since 2000 gas bills have doubled & electricity bills are up 75%.
The energy companies claim these increases are unavoidable as the cost of oil and gas rises on the world market.

These same energy companies have seen their profits increase 600%. Eon, Centrica, NPower and the others made £3,000m this year compared to £557m in 2003.
WHO PAYS FOR POWER CO. PROFITEERING?

The average combined gas and electricity bill in Britain is now £1,500 per household per annum and rising. The consumer group ‘Energywatch’ estimates there are now 5.5million households suffering from ‘fuel poverty’. [* When 10% of all household income goes on energy = fuel poverty].

There are now 6.8m people deep in debt to energy suppliers and they are in no position to cope with further price increases.
Pensioners will not be able to keep warm this winter and will die in their tens of thousands. This simply cannot be tolerated.

SO WHAT IS TO BE DONE?

The Scottish Socialist Party believes there should be a windfall tax on fuel company profits and bills should be held down.
But we also believe the energy companies should be taken back into public ownership. The rise in gas and electricity prices has been nowhere near as bad in the rest of Europe, the industry here has clearly been mis-managed.
The government must ensure everyone has the energy supplies they need as winter approaches. This is a right.
And if the government does not intervene, then people are entitled to say to say to energy company profiteering

‘WE WON’T PAY’.
SSP - THE LEFT ALTERNATIVE TO NEW LABOUR AND THE SNP 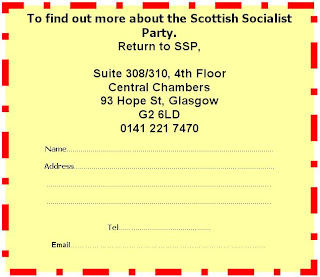 The Scottish Socialist Party welcomes the decision by Education Cabinet Secretary Fiona Hyslop for a consultation on the draft guidance for the use of biometrics in schools.

The Scottish Socialist Party have had concerns about this technology since being informed by concerned parents in East Dunbartonshire whose children will be attending the new build schools.

East Dunbartonshire Scottish Socialist Party spokesperson, Bill Newman commented, "The introduction of Biometric fingerprinting in schools has no educational or safety value. It is imperative that the use of these systems is frozen until this consultation takes place. Children are being conditioned to the 'surveillance society' without really knowing what it means.”

The Scottish Socialist Party echo the questions raised by the Leave Them Kids Alone campaign (http://www.leavethemkidsalone.com )

Announcement of Cabinet Secretary for Education and Lifelong Learning Fiona Hyslop of a consultation on draft guidance on the use of biometrics in schools. -


READ MORE ABOUT HOW THIS ISSUE AFFECTS YOUR CHILD HERE

The local authority have said that this measure combats bullying. Will this lead to bullies carrying plasticine? Watch this video - click HERE
Posted by Campsie Scottish Socialist Party at 9/02/2008 08:59:00 pm No comments:

These stickers have been appearing mysteriously around East Dunbartonshire 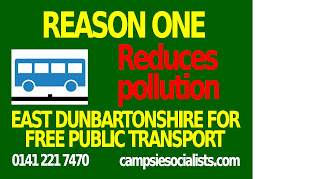 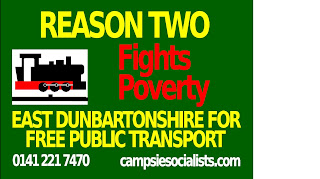 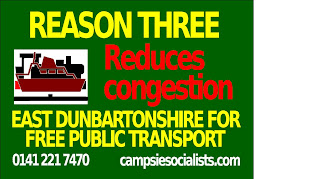