Last night, Yes activists, some from the SSP, some ex-Labour Party, some not from any political party at all, and some from other political parties, delivered 1000 Scottish Socialist Voices, specially produced for East Dunbartonshire. The local branch have had 6000 of this edition produced – to add to the 6000 previous issue already delivered and the 10,000 other leaflets already delivered advertising SSP Yes meetings and events. SSP members have helped distribute Yes produced materials in the area over the past two years – the SSP is an integral part of Yes Scotland.
The Scottish Socialists Voice produced for East Dunbartonshire have cost £600 so far. Add to this the cost of thousands of leaflets, hall hire, petrol and activists time, the total spend by one branch of the SSP is nearing £2000 over the past year.

The SSP, or the Campsie branch of the SSP, is not funded by Euro-millions winners. All of those Voices, each giving positive reasons to vote Yes, like getting rid of murderous nuclear weapons, or getting rid of Governments we don't vote for and highlighting the Tories, Lib Dems and New Labour's complicity in the dreadful bedroom tax and throwing local families to the mercy of food parcels and food banks, were paid for by unemployed members, disabled members, retired members and mums, dads, grandads, students and low paid workers.

But we do ask you to help us to print more leaflets; produce more pamphlets; hire more halls for people to go listen to Jim Sillars, Sandra Webster, Campbell Martin, Colin Fox, Katie Bonnar, Richie Venton and the other great speakers who have been touring Scotland spreading "The Socialist Case for Independence..."

The price of a bus ticket will help us leaflet 50 houses in our YesSSP campaign across Scotland. One small community could receive hope from your fiver and our shoe leather… please give what little you can. Every pound offers answers and hope to those suffering the yoke of Tory/ Libdem and New Labour economic oppression.

Joinus tomorrow in Glasgow to call on Israel to STOP THE KILLING. 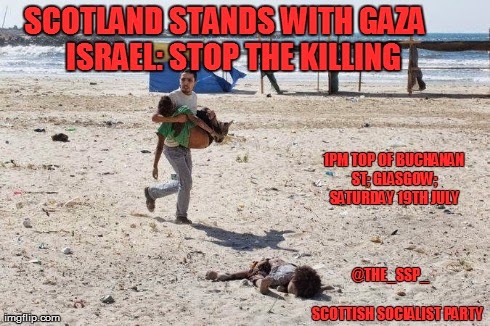 The Scottish Socialist Party feels and shares the worldwide revulsion at Israel's ground attack on the people of Gaza.

This is an area slightly smaller than Motherwell, but with the entire population of the Central Belt of Scotland crammed into the small space, which has been subject to attacks by a professional army, equipped by Nato, for two weeks.

The children whom Israel has not managed to kill are traumatised by life, and the essential infrastructure of Gaza has been shattered.

Israel's actions are entirely out of keeping with the responsibilities of sovereign states. They are aimed at civilians, and they kill civilians. Reports from the Foreign Correspondent for the American TV station, NBC news, Ayman Mohyeldin (@AymanM) have plainly shown the Israeli forces targeting and attacking a group of football playing children. The children, who were shelled as they played, were between the ages of 9 – 11. Four young boys died shortly after the correspondent had been kicking the ball with them. Day after day, hour after hour, report after report, we see the medical services in Gaza, overcome by the targeting, injury and death meted out on ordinary children, women and men.


The Israel Defence Forces are acting in a manner in which they would never perpetrate against Israeli citizens.

We have been here before. There is a word for what the behaviour of the IDF has done to demolish the relationship between Israelis and Palestinians.

It is the only word which the Afrikaans language has given to the world. It is a word we hoped would only ever be used in history classes.

That word is Apartheid.

We oppose genocide. We call on the governments of Europe to join us in this opposition. We plead with the governments of our European Union to oppose Israel's genocide. We recognise and welcome the statement from the Scottish Government opening our hospitals to those injured in the Israeli attacks, but this needs to go further.  Scotland needs to send hospital aircraft to the region.  Scotland needs to send humanitarian aid and Scotland needs to ensure all TV services allow a Disasters Emergency Committee humanitarian aid appeal.We plead with the Scottish and UK Government to oppose Israel’s attacks and to use all the levers of commerce and diplomacy to bring this disproportional action to a halt.

The SSP condemn the Israeli attacks on the people of Gaza.

The Scottish Socialist Party deplores the continued violence in the Middle East and the completely disproportionate violence from the Israel Defense Forces, which amount to collective punishment of the Palestinian people. 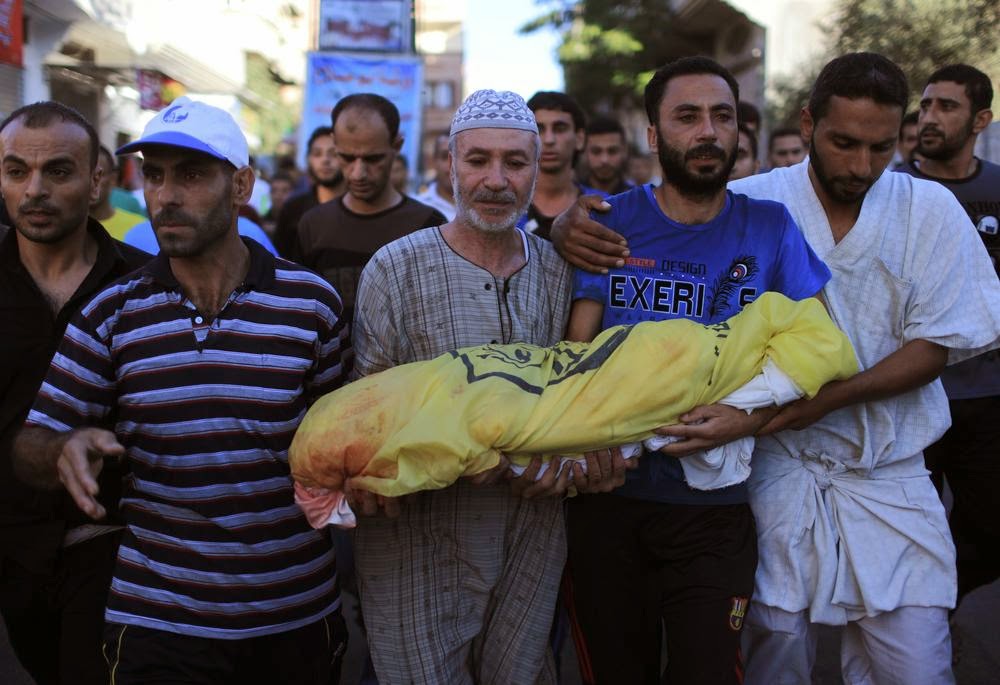 We condemn the State sanctioned and executed murders of civilians. The UN has stated that 70% of those who have been killed by drone attack, ground forces, fighter-planes or gun boat have been ordinary Palestinians who are in effect, imprisoned and ghettoized behind the Israeli built  wall. Shockingly, disgustingly, sadly 30% of those killed have been children.

We call upon both Israel and Hamas to cease fire immediately, and call on both sides to refrain from deliberately targeting civilians.

We further call on Israel to end its economic and physical blockade of Gaza, and to replace the essential infrastructure which has been destroyed by its actions - actions which were perpetrated by their Defense Forces with no heed given to their proportionality or legality.

The grievous loss of life of civilians in Gaza is a stain on the reputation not only of the Defense Forces, but on the whole State of Israel.

As long as the State of Israel behaves in this manner, the Scottish Socialist Party believes we have no option other than to call on our members and supporters, and indeed all Scots, to boycott all Israeli goods.


"Zionist Israel must be forced to stop the Genocide of the Palestinians in Gaza.  We need  to build public pressure on all Governments to take action against the Israeli Government to force them to halt the slaughter of Palestinians Immediately.  Israeli Apartheid is no different from that in South Africa.  Solidarity and respect with the Palestinian People."

Statement from Jim Bollan on the threats: HERE

SSP condemn the Israeli attacks on Peace Flotilla HERE )
Posted by Campsie Scottish Socialist Party at 7/15/2014 12:37:00 am No comments: