HOW TO MAKE GREED HISTORY!

Registered voters should have received a polling card with polling station details.

YOU CAN STILL VOTE WITHOUT A POLLING CARD.
The ballot paper is made up of party lists; name of party and list of candidates.
You vote ONCE for your choice of party
Once you have been given a ballot paper, look for the Scottish Socialist Party.

Vote ONCE for the Scottish Socialist Party

If you have any time to spare on Today it could potentially make a big difference to our vote if you can encourage and possibly facilitate members of your family, workmates and friends to vote. If people haven’t voted before it can be quite an intimidating experience and having someone on hand who knows the procedure can be helpful.

Whatever the result, due to be declared in Edinburgh on Monday 8th, the SSP would like to thank all of our members and supporters who have made the Make Greed History campaign a huge success, particularly those socialists in USA, Switzerland, England, Wales and the North of Ireland who have contributed to the fantastic response to our financial appeal (we are not a party of or for millionaires - so donations from ordinary people keep us able to fight FOR ordinary people - to donate, please text a pledge to 07810205747).

Mark Callaghan is the local candidate in the Bishopbriggs South by-election. Let the greedy "main parties" know what you think of them by voting for CHANGE! 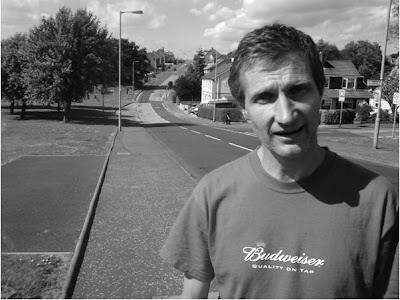 Mark on Woodhill Road, Bishopbriggs South on Wednesday during a whole day of campaigning.

Mark's Press Release as featured in the Kirkintilloch and Bishopbriggs Herald:

I'm a 43 year old activist, who will challenge the greed agendas of the main parties.

Privatisation con-tricks -PPP/PFI -have been used to build several local schools. Bishopbriggs now has fewer schools and the school buildings are owned by private firms.

This means EDC is hugely mortgaged. For the next 30 years WE will pay millions to giant companies. I am committed to ending this rip-off. I want big business out of schools and hospitals.

This would free up millions to invest in health, housing and education.

I support a wealth tax that will create 80,000 jobs in Scotland with an average wage of £25,000; insulate Scotland’s homes; ensure no schools close; upgrade existing schools; reduce class sizes to 20 and less and pay for free school meals.

The Labour Party and it's Councillors are closing schools - tearing the heart out of communities and cramming children into huge "superschools". The SNP seem powerless to stop this -or don't want to. I will fight this wrecking of our education system.

I will fight the privatisation of Royal Mail. It’s profits (2008-£323m) should be for hospitals and schools and not for shareholders in private companies like TNT.