The SSP on the demonization of our youth (2003)

I unashamedly reproduce this article from the Scottish Socialist Voice about Rosie's Scottish Parliamentary battle against the demonization of our youth:

No votes no rights 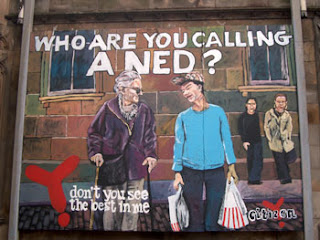 by Jo Harvie
After months of election propaganda, veiled threats and open slander, the Scottish Executive launched their crack down on "anti-social behaviour", predominantly aimed at young people labelled by the Executive as neds.Their bill could hand extensive new powers to police and the courts, including the use of electronic tags and fixed penalty fines for children.
Heavy emphasis was also placed on new police powers to "disperse" groups of three or more people gathered in the streets, touted as a way of dealing with young people in gangs.
But the Scottish Human Rights Centre have compared this to the stop-under-suspicion (sus) laws introduced in England and Wales in the 1980s, which caused a huge increase in tension between young people and the police.John Scott told press:
"It created a generation of people who were as suspicious of the police as the police were of them.
"As a matter of principle, I do not think that if there are three young people in the street doing nothing at all the police should have the power to interfere with them.
"This is a radical departure from current police powers. The European Convention on Human Rights guarantees the right of free association, the exception being if you are breaking another law.
"Giving the police such wide-ranging powers that could be easily abused is not the answer.
"We have gone too far on the intolerance current in society towards young people."
SSP MSP Rosie Kane agrees:"Young people are being demonised to promote a really oppressive piece of legislation.
"I don't think a few young people hanging about on the street is a problem - I'm all in favour of pedestrianising our communities.
"Obviously if any person is behaving in a way that is hurting or threatening other people, then we have to deal with that. But the Executive are saying that young people in general are a problem we need to deal with."They are refusing to say if they'll be tagging eight year olds or not.
"Imagine a wee eight year old child who can't go out in shorts in the summer because he's got the bad boy label on. What kind of message is that for young people?
"In the absence of any real, progressive legislation on poverty, they're using a few words that appeal to people's fears and I think will have a really negative effect, not just on young people but on all of our communities."
The Scottish Socialist Party was the only political party to speak out against the proposals, but anti-poverty groups were also critical.
As the Executive launched their crusade, the Scottish Human Services Trust released a report, Staying Human by Gerry Hassan and Sue Rawcliffe, saying that the Executive have failed to address real poverty and inequality.The report says Scotland has become more unequal since the founding of the Scottish Parliament.Hassan also criticised the Scottish Executive's increasing tendency to talk in "morally authoritarian" terms of blame and punishment, especially where young people are concerned:
"The Scottish debate never used to have that punitive language. These young people who are getting tagged better hurry and grow up and vote."
On Saturday, Rosie was in Edinburgh to unveil a mural painted by a group of young people under the guidance of a youth project called Citizen Y.
Angered by the way that young people have been scapegoated by the Scottish Executive, a couple of weeks ago they decided to rename their mural Who are you calling a ned?
Rosie told the Voice:
"The mural has been created by the young people who are viewed, labelled and dismissed by the politicians as 'neds'."The project has given them something to do, and they've made something beautiful out of it."Treating young people positively means you get positive attitudes back from them, just like anybody else."