Why I support an independent Scotland 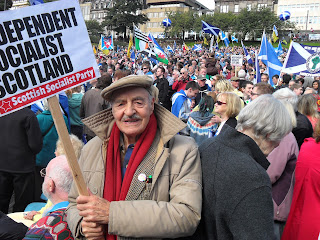 When asked why I wish for an independent Scotland I find it difficult to give a short answer – there are so many reasons.

There's been a long tradition, going back beyond Burns favouring Scottish independence while maintaining an international outlook.

“Man to man the world o'er should brothers be for aw' that.”

Defending welfare programs and promoting genuine socialist policies would be much more possible for an independent Scottish Parliament.

Some of the policies of the SNP I object to but the opposition to weapons of mass destruction and the call for full independence have my full support . I oppose war – all wars and see a nation free of all nuclear weapons as a progressive step in the struggle for peace in the world.

For the sake of the whole of humanity this situation must not be allowed to develop again. Scotland, a small nation dedicated to peace, could play it's part.

Watch:  A time lapse map of every nuclear blast since 1945.  A compelling yet horrific video...