SSP and Greens working for Yes in Milngavie

Afterwards, SSP Member, Alan Green said, "What was striking was just how many disaffected Labour voters and ex- Labour Party members were keen to listen to our view of a future independent democratic country.

The dismal image the Tory, Liberal Democrat and New Labour Party have been painting of present day and a future Scotland is not one progressive left supporters recognise.

The recent publicity given to the rapidly expanding Labour for Independence group was noticable as more and more people spoke about their disapointment that the Labour Party seems to speak more for the well off Etonian Liberals at the heart of Government than the working and poor it used to represent.

Many people were glad to hear the pro working class vision of the SSP and the ecological concerns of the Greens.

Milngavie is well on its way to voting Yes!" 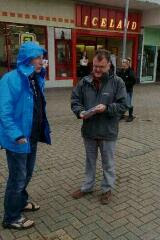