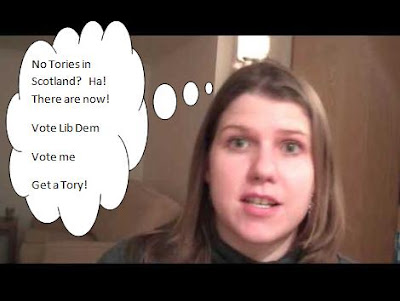 So there you have it. We have a Government none of us voted for. Most of those who voted Lib Dem in Scotland did so to keep the Tories out. 85% of people in Scotland voted anti-Tory, - 68% UK wide. Two Eton boys then sat down and carved out a Government made up of old Etonians, bosses, Lords and Ladies. Not one person who negotiated this ‘coalition of thieves’ had a working class accent – nor did they stand a chance of being hit by the austerity measures the so called “left of labour” Lib Dems and the Tories are about to mete out on the working and middle classes.

All of the negotiators were white, well shaven men. No women, single mothers, Union representatives – no-one with a modicum of empathy for working class people and our struggles were there. The public sector is – East Dunbartonshire is - about to be hit with a barrage of cuts that will see working families and the poor bleed to feed the markets and to pay off the rich man’s debt.

This is not what we voted for in the UK, neither in Scotland nor in East Dunbartonshire. Jo Swinson was buoyed up by a tactical vote both from SNP and Conservative supporters who gave her a 4000 vote margin between her and Labours John Lyons in 2005. This time, the tactical vote, for the most part, was seen to be unnecessary. The SNP vote gained, as did Labours. Swinson halved her majority.

Sally Magnusson hit the nail on the head in her recent TV programme, "Why didn't the Scots vote Tory?" She concluded that the electorate here do not vote out of the self interest promoted by the Tories - we think of others. Self interest sums up this squalid deal. Swinson and the Lib Dems delivered Tory majority rule – and the swingeing cuts and misery the Tories and Liberal Tories will mete out on us.

Let her know your thoughts and ensure the non-alternative – the lie of a “left of Labour” Liberal Democrat party is put to rest. Do not vote Tory/ Lib Dem again – they are unnecessary in East Dunbartonshire. The Tories can only win in this constituency with a leg up and the “looking in both directions” of the Lib Dems. This has been proved both here and country wide.

This is a coalition of cuts.

It has been strapped together in order to allow the worst cuts meted out on the working and middle class in history. Brought together by the ruling class and their media. The markets are not happy, we are told, and this means you should lose your job or take pay cuts.

Let’s unite against the rubbish they spin – the racism and the financial fairy tales that are forced down our TV sets that set working class against working class. The true enemy is not the immigrant, the true friend is not the “markets” and marketeers who are making you pay for their gambling.

We need a coalition of the electorate. - We need a vote for real – Scottish Left– alternatives.

The Scottish Socialist Party believe the rich bankers and corporations who got us into this economic mess should pay – not the health workers and bin men , education workers, small businesses, posties, rail workers or street cleaners in East Dunbartonshire. Ordinary people and their jobs should be protected from this greed induced crisis, not made to suffer to allow the rich to keep their millions/billions.
Posted by Campsie Scottish Socialist Party at 5/11/2010 07:42:00 pm

Actually, Clegg didn't go to Eton. He went to Westminster.

(Sorry, posted that on the wrong entry before.)

Hi anon nice to know that is all you disagree with! -- yes - I realised that error after I published... but didn't change it as the premise still stands - power is in the hands of the privleged classes - there are no people who negotiated - or indeed, IN this Government who can truly empathise with people who have struggled to make ends meet.

Rats jumping onto a decidedly unstable ship is how I see it. For the sake of token power the lib dems have abandoned their usual sitting on the fence charade and come down firmly on the side of team greedy.
No surprises they teamed up, Clegg (a member of his university conservative party)is so anti union he makes a point of praising thatchers bitter attacks on trade union rights in the 80s. The lib dems run by the 'orange book' free marketeers also believe in the dismantling of the NHS and more right wing idiocy, a match made on the playing fields of england for sure.
We are back to victorian times with this patrician patronising government, with very little in the way of working class voices to be heard in this posh parliament.
The lib dems claim to be serious about education yet they will be supporting notorious right winger michael 'gollum' gove as education minister (like mandelson without the humour) so I don't hold out much hope for them there. At the treasury Vince Cable gets to dab Gideon Osbornes sweaty brow as he takes a scalpel to anything not affecting buisiness people, and 'national interest' Nick gets to make the tea at number 10.
For all their bravado the lib dems have got nothing from this coalition, sorry, one thing. They will get to share in the hatred of a country refusing to pay the gambling debts of the parasite class they so eagerly represent.