The naked aggression against the people of Gaza by the Israeli state has been exposed once again in another despicable, murderous act against unarmed people. The unprovoked attack on the peace and humanitarian aid convoy in international waters is akin to the anti racism attacks on activists in the southern states of America in the 1960’s and the shooting of peaceful protesters in Sharpeville, South Africa in 1960.

The Scottish Socialist Party stands shoulder to shoulder with the flotilla activists and the Palestinian people and we call on the UK and Scottish Governments to condemn the heinous crime of the Israeli Government immediately.

We call for a boycott of Israeli goods and international sanctions on the Israeli state. The UN must show leadership of the international community and initiate action rather than the stream of empty words it has issued over the years.

The UK Government also needs to initiate an enquiry at the BBC reaction to the flotilla and the attack. The BBC is reported to have refused to give coverage of the flotilla and on the morning of the attack was only reporting the words of Israeli spokespeople. This seeming BBC policy towards reporting on Gaza recalls a refusal to broadcast a charity appeal for aid to Gaza in January 2009.

The SSP calls for an immediate end to the Israeli blockade of Gaza and for justice for the Palestinian people.

Photos from rikki Reid, who attended demo in Glasgow: 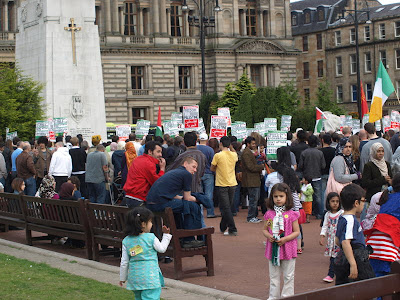 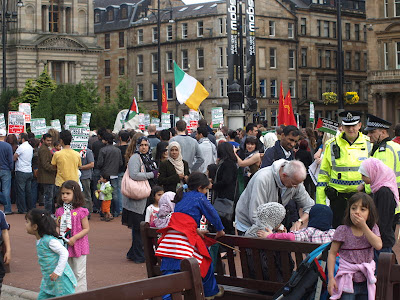 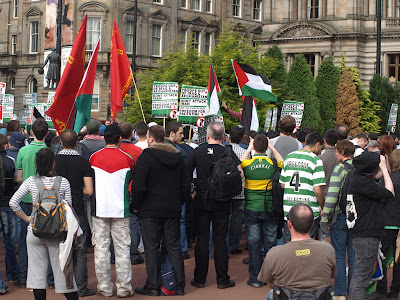 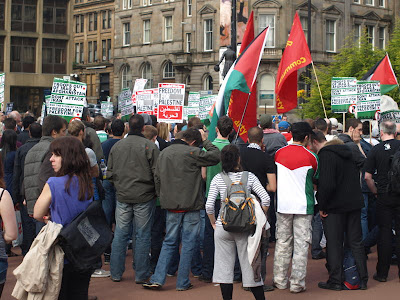 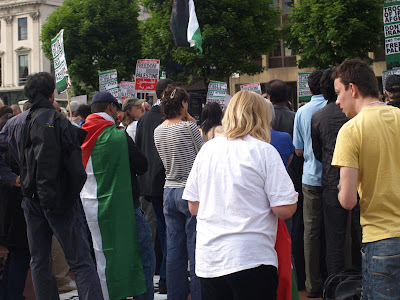 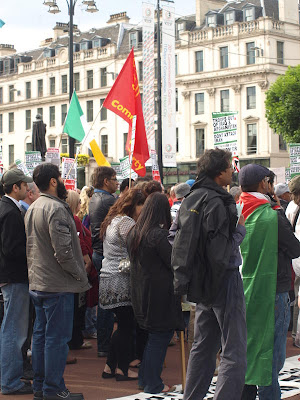 Photos from SSP member Mike Dyer, who attended a demo in Manchester: 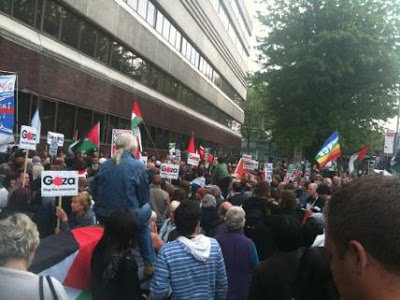 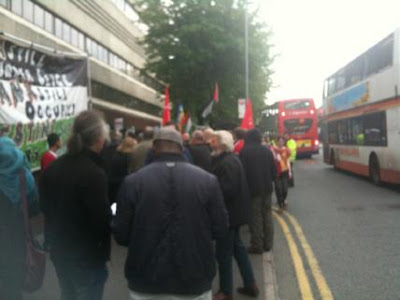 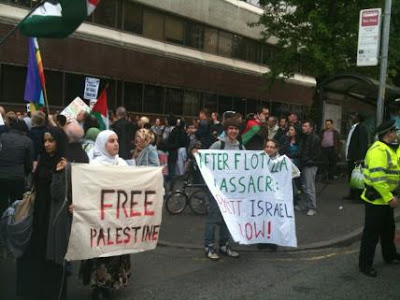 Hilary Clinton has come out saying that an independent inquiry could be held by Israel.
She obviously has no idea of the depth of feeling against these latest atrocities commited by the israeli defence (sic) force. Her idea is as ridiculous as asking bin laden to head an inquiry into 9 11.
The idea itself is a non starter. The murders took place on a turkish ship flying a turkish flag in international waters, under international maritime law this is treated as turkish soil, and as such the inquiry into the deaths has to be held in Turkey. I'm sure turkish people would much prefer it to be at Ankara rather than another IDF whitewash from Israels kangaroo courts, and I would suspect they will be vocal in letting the turkish govt. know their preference.
Even if it was announced that Israel was to hold an 'inquiry' who would come to it. They have no legal right to force anyone to attend, the heroes of the freedom flottila are unlikely to subject themselves to an israeli justice system, which is as crooked as a lib dems rent claim.
Turkey by contrast can legally oblige people of all nations involved in the incident to appear, though I can't see the'brave' Idf marines turning up.
Clintons suggestion should be treated with the disdain you would normally reserve for a gatecrasher at a wake, the names of the dead still waiting to be released, and she is pontificating on something which patently is nothing to do with either her or the U.S.