In light of what happened in East Dunbartonshire over the last fortnight (the shortest and most effective campaign in the history of the Campsies?) it is fantastic to come to the conference of Scotland’s overwhelmingly largest teaching union – the EIS – and find that teachers are ready to stand up for our communities and services beyond the classroom door. 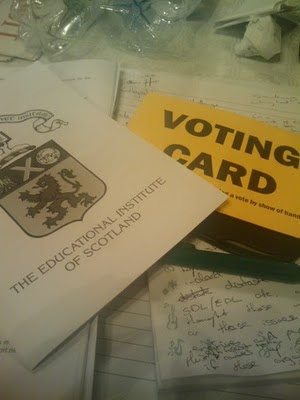 If there was a theme to day two of the conference, it was the opposition of teachers to the cuts, and like the small political parties, highlighting the fact that there IS an alternative to them other than the solution given by the large, mainstream parties. Motion 51 was passed unhindered. It calls for a ballot to strike to fight the budget cuts next March. If the membership vote for this, this will give a clear message to the mainstream parties and millionaire run press that even the professional middle classes are not “getting” the need for these cuts.

David Cameron and the Tories have been very clever in how they are playing public sector worker off public sector worker. They have re-framed their message from “cuts are inevitable” to “who do you want to suffer rather than you?” Trying to play off profession against profession, worker off worker – building on the disgusting Thatcherisation of society begun back in 1979. Thank Marx that the Scottish people do not buy this selfish and self defeating message. The last time we had a debt as huge as this (one not created by millionaires, but by World War Two and the fight against fascism) the government took the only line that could ensure no-one starved and everyone benefitted – they set up the welfare state, and indeed our wonderful NHS, the envy of the world. Unfortunately all of the mainstream parties are wanting to get rid of what was the countries saviour in those debt ridden and austere times in order to save the rich from paying for their crisis. 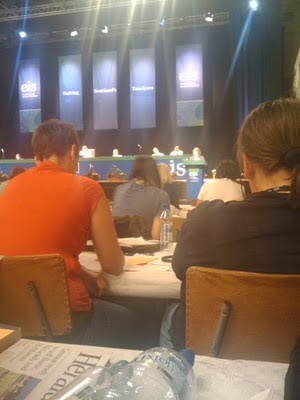 Speeches from the EIS podium called for redistribution of the billionaires and bankers wealth. People called for the scrapping of trident, and one speaker even called for the disbanding of the army, asking the question, “what has the military ever given us only the death of our soldiers?” Others spoke about the waste of people and resources in the Afghanistan theatre of war and others said “keep the dustmen and sack the spin doctors – who would you miss first?”

Amongst other superb debates, one that stood out, and will be revisited I am very sure, was one on banning the BNP, SDL or EDL from educating our children. Even though this motion was defeated (only just- and because some people were unsure banning was the most effective way to fight the fascists), what emerged from conference was an overwhelming distaste for the fact that fascists are allowed near our children. Those who led and spoke on the anti-fascist side on this issue were brilliant, emotive (one delegate spoke about the recent anti-Semite threats her daughter had received) and persuasive.

All in all, the conference has shown our teachers to be progressive and are definitely on the side of the working classes – and PTA’s – in this fight against the unrepresentative ConDemNation.

To see bigger version of SSP EIS Voice, please click on the images below. 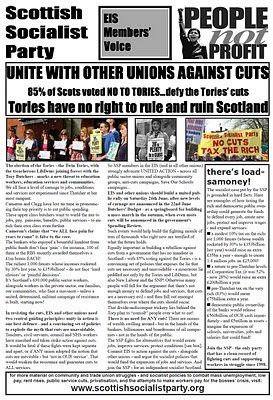 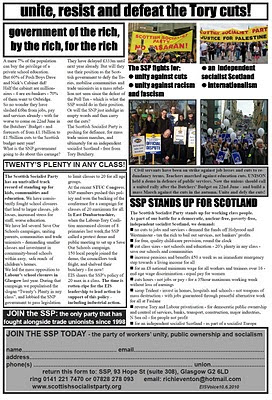