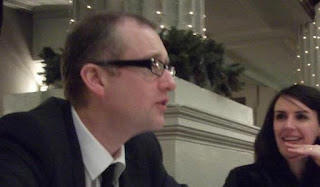 “East Dunbartonshire has, in recent years, had the misfortune of having had a Liberal Democrat Council followed by a coalition of Labour and Tories. The mishandling of the council by these three versions of the same thing has seen an attempt to close schools in the past two years; terrible deals with corporations that have meant millions of pounds of our Council Tax money being given over to massive PPP/PFI “Guaranteed returns on investment” for minimum outlay; a decimation of our local services from Libraries through to schools, and more. If any of these parties gain the council in May, there will be more of the same, and in fact the deferred closure of East Dunbartonshire Schools will go ahead.

As a father and a teacher I have a different vision for East Dunbartonshire services. Our area is a well off council area, one in which money could be invested in our services rather than further job-losses and cuts. I see a clear need to renegotiate PPP/PFI deals. Some of these venture capitalists are making millions of pounds of our tax money with investments of a few hundred pounds. I see East Dunbartonshire being a place of opportunity for all; a place where our money is invested in real jobs and services which will help stimulate the Scottish economy. The real drivers of any economy are people. The profits creamed off by corporations from our Council tax should be reclaimed and invested in real jobs and in our people.”
Posted by Neil at 3/11/2012 11:02:00 pm